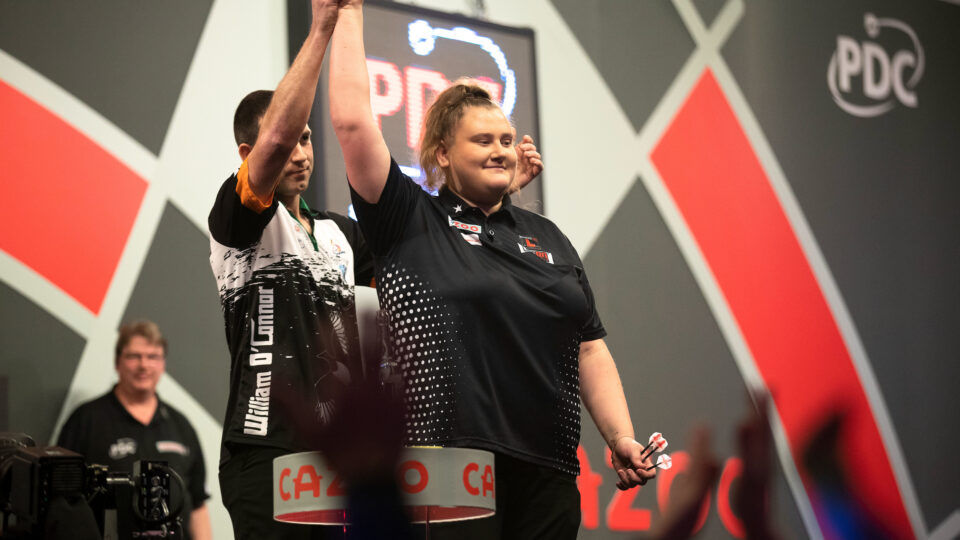 Beau Greaves will rue missed opportunities as she lost to William O’Connor on day two of the PDC World Darts Championship.

The 18 year old star from Doncaster had chances to win the opening two sets but did not take them, allowing The Magpie to eventually win 3-0.

Grand Slam of Darts champion Michael Smith though had no such issues, as he beat Nathan Rafferty 3-0 to move into round three.

William O’Connor v Beau Greaves was billed as one of the ties of the round at the start of the tournament. Certainly for the first two sets, it was.

Greaves kicked off with a 120 outshot, but two straight legs for The Magpie saw him throwing for the first set. However, he missed three darts to win it, allowing Beau and Arrow to find double two and level. Greaves then missed double 16 for a 105 in the deciding leg, as O’Connor cleaned up 40 to go 1-0 in front.

It did not seem to bother Greaves at the start of the second set, as back to back 18 darters gave her a two leg lead. In the third leg, she then missed bullseye for a 161 and to level the match. The Magpie found double 12 to cut the gap to one and back to back finishes on double eight in the next two legs gave him a 2-0 lead.

O’Connor then found a 107 finish with Greaves on 52 at the start of the third, and that seemed to break Greaves’ heart. 31 darts later, The Magpie completed the job, setting up a date with Gabriel Clemens in round two on Wednesday night.

Despite winning by the same scoreline, it was much more comfortable for Smith against Rafferty, as he whitewashed his opponent in sets and legs.

The Natural, who beat Jermaine Wattimena yesterday, could not get going as Bully Boy wrapped up the first set in 49 darts, finding double nine to do so.

After winning the opening leg of the second, Smith took advantage of five missed darts from Rafferty in the second leg, eventually finding double eight to break. Another double nine gave last year’s runner up the second set.

Smith broke in the first leg of the third, before hitting back to back 180s in the second leg. Despite not hitting the nine, he won the leg and lived up to his moniker to close the match, finding a 130 outshot on the bull to complete the whitewash. He faces either Martin Schindler, Martin Lukeman or Nobuhiro Yamamoto in the third round on Wednesday 28 December.

Lewis and Huybrechts move on

2011 and 2012 champion Lewis looked in decent touch this afternoon, beating Daniel Larsson 3-0 to set up a tie v Damon Heta in round two on Sunday afternoon.

After both held in the opening two legs of the first set, Lewis then found double eight to hold again before an excellent 13 darter gave him a 1-0 lead. Both held again in the first two legs of the second, but Larsson then missed four darts to take the third. Jackpot punished him on double eight to break, before another 13 darter put him 2-0 in front.

The third set followed the same pattern as the first. Both held, Lewis held again on tops, before finding double nine to break and win the match.

Huybrechts labelled his round two game as the easiest he’s ever played at the World Darts Championship, as he won against South African Grant Sampson by the same scoreline.

Sampson won the opening leg of the match after Huybrechts squandered three darts to break, finding double 16 to do so. However, he could not find the scoring he found that helped him to beat Keane Barry yesterday, averaging just 68.97 in the contest.

Huybrechts won the next nine legs, including an excellent 154 checkout in the penultimate one, as he cruised to victory with an 83.37 average. The Hurricane will play Peter Wright in round three on Tuesday 27 December.

Ilagan and Rowby-John Rodriguez went to the first last leg decider of the tournament in their round one game.

The Filipino started the brighter, winning the first two sets which included a 116 checkout as Rodriguez struggled on his doubles. He also won the first leg of the third set and many in Alexandra Palace thought the game would be over quickly.

The Austrian however fought back strongly, winning the next six legs to level the match at two sets all. Rodriguez then broke at the start of the fifth set, but missed four to go one away from the game.

It allowed Ilagan to find double six to level, and after two holds, the game went to a deciding leg. The Filipino then hit double 18 to win and bring an excellent game to an end. Ilagan will play Dimitri van den Bergh tomorrow evening.

There was another last leg decider in the night session, as Hempel beat Keegan Brown in the game of the tournament so far.

Hempel took the opening set with an 89 outshot in leg five, before breaking to get a 2-1 lead in the second set. The Needle fought back however, as he hit back to back 14 darters to level the match.

Another deciding leg occurred in set three, where both players missed chances to win it. However, Brown found double four to go 2-1 in front. Hempel though broke at the start of the fourth, before two holds saw the German level the game.

In the deciding set, Hempel went 2-1 up, before missing double five for the match. Brown pinged 80 to send it all the way but his scoring let him down. A 180 from Hempel left him on 34 after 12, eventually hitting double eight to win a thriller and set up a round two tie v Luke Humphries on Thursday night. It also means Brown loses his Tour Card and will have to win it back at Q-School in January.

Soutar won the first set 3-0, before back to back 3-1 sets, including a lovely 124 out on the bull to win the second, saw him get over the line. Soots will play Daryl Gurney in round two tomorrow afternoon.

Croatia’s Krcmar also came through 3-0 against another debutant in Japan’s Toru Suzuki. Krcmar found double eight to win the first set, before whitewashing his opponent in the second set despite a 29 dart leg.

Suzuki forced a deciding leg in the third set, but the Croatian player pinged double eight for a 73 shot to move into round two. Krcmar takes on Nathan Aspinall Sunday evening.