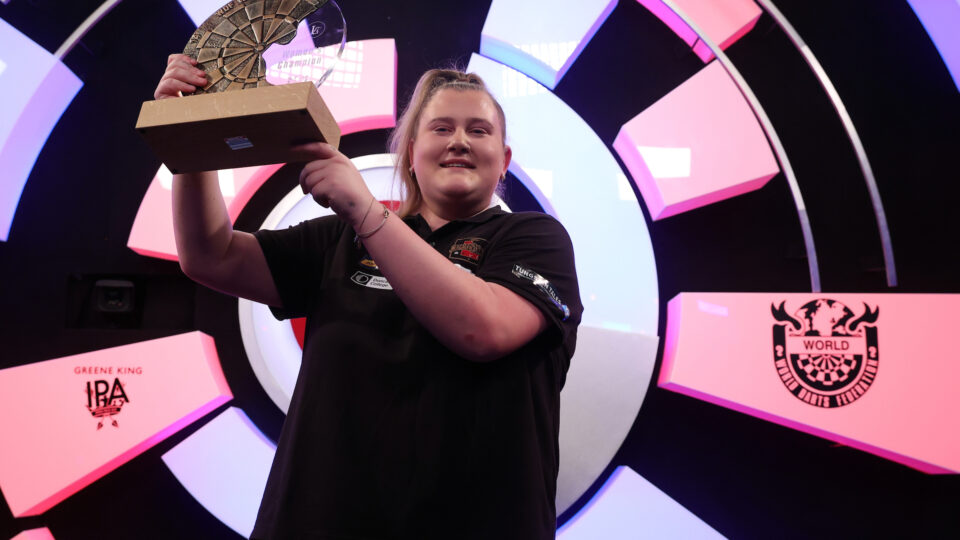 Peter Wright won on night one of the 2022/23 PDC World Darts Championship to be the first player into round three.

It does always feel like the tournament properly gets going on day two however, as we have the first double session of play. In the afternoon session, a former back to back World Champion will start their bid to return to their best form.

In the evening session, the Grand Slam of Darts winner and last year’s runner up looks to go one better, while one of the biggest names in women’s darts makes her debut on the Alexandra Palace stage.

Here’s what you can look forward to on day two of the 2022/23 PDC World Darts Championship.

Lewis looks to hit the Jackpot in day session

The headline act in round one on Friday afternoon is Adrian Lewis. Jackpot won this title in both 2011 and 2012, remaining the only player to hit a nine darter in a PDC World Darts Championship final.

Lewis faces Daniel Larsson in the third game of the afternoon. Larsson came through the PDC Nordic and Baltic qualifiers, but after two years as a Tour Card holder, has not pulled up trees and needs a big tournament to avoid having to go back to Q-School. Can he spring a shock, or will Adrian Lewis earn a second round match against Damon Heta on Sunday?

The seed in action on Friday afternoon is Kim Huybrechts, who’s had a season of highs and lows. He reached two semi finals on the Pro Tour this year, and is back as a seed at the Worlds after missing out last year. He takes on Grant Sampson, who shocked Keane Barry 3-1 yesterday. Will the South African  or will the Belgian bounce into the third round for the third straight year?

The second round one game of the evening session sees the brilliant Beau Greaves make her Alexandra Palace debut.

Greaves won the WDF Women’s World Championship in April and is the number one seed for next year’s event as well. In the PDC Women’s Series this year, she won eight of the eight events she entered, including beating Fallon Sherrock with a stunning 107.86 average in one of the finals.

Awaiting her in the match is William O’Connor. The Magpie from Ireland made a Euro Tour final this year, and previously was also runner up in the World Cup of Darts with Steve Lennon in 2019. Can he make the second round for the third straight year, or will Greaves go through to play Gabriel Clemens in round two?

Grand Slam of Darts champion Michael Smith is the seed in action tonight. The Bully Boy has made four TV finals this calendar year, finally breaking his major duck in Wolverhampton last month. He finished runner up in this event last time out, so can he go one better in 2023? To do that, he’s got to get past Jermaine Wattimena in what should be a quick paced game, who beat Nathan Rafferty yesterday.

In one of the other first round games tonight, Austria’s Rowby-John Rodriguez, who made a Euro Tour final this season, takes on the entertaining Lourence Illagan of the Philippines in what could be a gem of a first round tie. Who will make the second round and face Dimitri Van den Bergh tomorrow evening?

The last round one match sees Keegan Brown take on Florian Hempel. Brown won Players Championship 23 this year, which helped him qualify through the Pro Tour Order of Merit and give him the chance to save his tour card. To do that, he will need to win at least one game at the Worlds. Hempel qualified by winning the Europe Super League and needs one win to guarantee he will be playing on the tour next year. Whoever gets that crucial win will get a long break, as they have to wait until next Thursday night to play Luke Humphries.