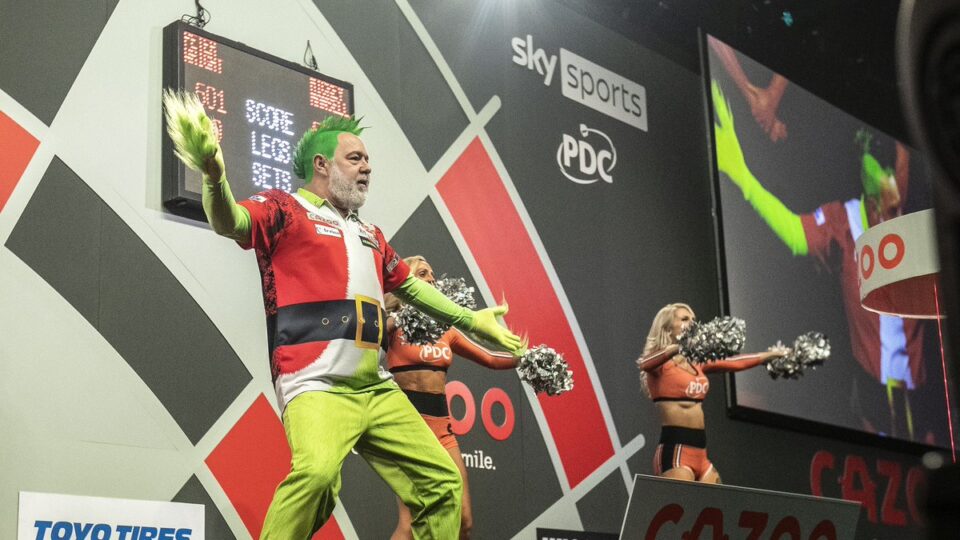 Peter Wright put on an excellent show on night one of the PDC World Darts Championship.

The defending champion was barely tested in his 3-0 victory over Mickey Mansell, as he bids to win this title for the third time in four years having also won the 2020 edition.

Wright will now have to wait until Tuesday 27 December for his next game, but the world number two looked extremely comfortable in reaching round three.

Elsewhere, both Grant Sampson and Nathan Rafferty won their first ever matches at the World Darts Championship, as they overcame Keane Barry and Jermaine Wattimena respectively.

Wright waltzes into third round

Mickey Mansell defeated Ben Robb in an excellent opening game to set up the meeting with Wright, but it seemed that the game may have taken it out of him.

Wright played in costume as The Grinch, and with his wife Jo back by his side after her recent visits to hospital, looked in a jovial mood during his walk on. He then proceeded to break his opponent’s throw in the opening leg, before Mansell responded in kind to level the set at 1-1. The World Champion though took out an excellent 121 finish on the bull, before a 15 dart hold gave him the first set.

Snakebite found a 15 darter to take the opening leg of the second, and after Mansell missed bull for a 130 and tops for 78, the world number two found double ten and double five respectively to win legs two and three and go two sets clear.

A break for Wright at the start of the third effectively ended the contest, with the highlight of the match coming in the next leg when he hit a 126 outshot. 15 darts later, the World Champion hit a 68 shot to confirm his place in round three.

Day for debutants at Alexandra Palace

In the second game on, Grant Sampson produced a huge shock, beating Irish youngster Keane Barry 3-1 to win on Ally Pally debut in a game full of missed doubles.

Barry raced into a 2-0 lead in the first set. However, Dynamite squandered darts to win the set in each of the next two legs, allowing the South African to force a deciding leg. Throwing first, Sampson found a 17 darter to hold and take a 1-0 lead.

Both missed darts to win the opening leg of the second set. Sampson eventually found double eight to break, before an excellent 125 from the South African saw him go two legs up. Barry then won his first leg in six, before finding double five after Sampson missed darts to double his lead. Despite missing five more darts in the fifth leg, Sampson eventually hit double six to go 2-0 clear.

Sampson held at the start of the third, before Barry levelled after both again missed multiple darts to win it. He then broke, before holding to halve the deficit.

Both held at the start of the fourth, but Sampson broke with a 25 shot to throw for the match. 18 darts later, he found double 16 to complete a famous win. He finished 10/44 on the doubles, while Barry hit 8/35. Sampson plays Kim Huybrechts tomorrow afternoon.

Nathan Rafferty followed suit by winning his debut match at Alexandra Palace, winning 3-2 against Jermaine Wattimena in an excellent game.

The opening stanza saw both players hold throw twice, with both missing a dart for the set. However, throwing first, Rafferty found double two to go in front. Wattimena responded by winning the first two legs of the second set, before The Natural levelled with two straight legs of his own. However, The Machine Gun found a 97 outshot in the deciding leg to level the match at 1-1.

The pair held in the opening two legs of the fifth set, before both missed darts to win the third. In the end, a double four from Rafferty gave him the hold and moved him within one. Both again had chances to win the fourth leg, but at the fifth attempt, The Natural hit double 10 to secure a meeting with Michael Smith tomorrow evening.