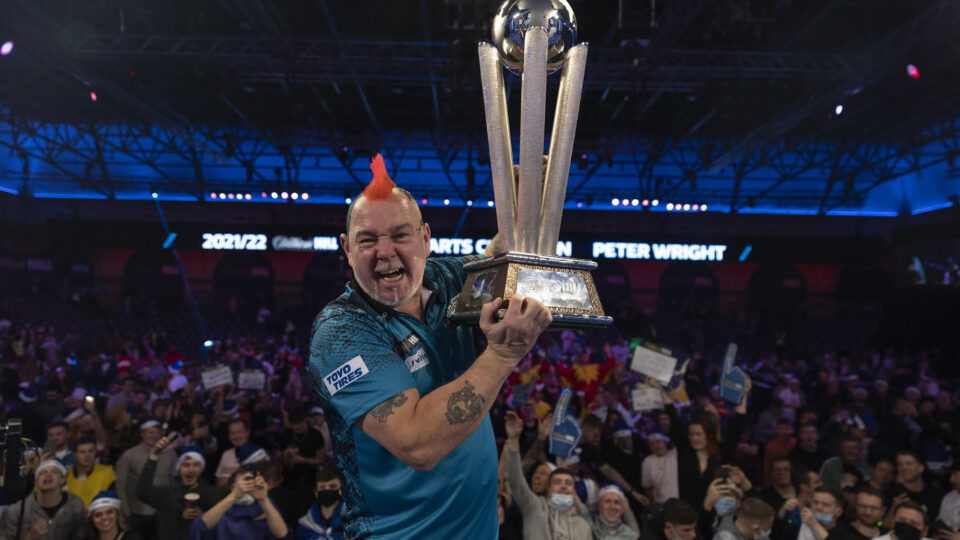 Peter Wright has won the PDC World Championship for the second time.

Wright defeated Michael Smith 7-5 in a gripping final, that see’s the Scotsman lift the Sid Waddell trophy for the second time in three years.

Back in July, Peter Wright declared he was going to win the World Matchplay and the PDC World Championship.
Fast forward 7 months, and the 2 biggest ranking trophies in the sport now reside at Wright Manor. Add the Players Championship Finals to the haul also, and the 2022 season has been very productive for the World Number Two.

As can be expected with so much on the line. The opening encounters of this match started in a truly edgy fashion. Michael Smith’s scoring power was on show with two 180’s in the opening leg. Unfortunately for the Bullyboy, his fragility on the outer ring also appeared. Wright pinched the first leg after 2 missed darts at a double, but that wasn’t the end of the tension.
Step up leg two. The worst leg of the entire tournament followed after the pair missed a combined 21 darts at a double. Smith finally hitting D1 for the leg. A 28 dart hold put him on the board.
A comfortable hold for Wright followed, before more missed doubles for Smith in set 4 handed Wright the set.

Much like in his win over Gary Anderson in the semi-finals Wright doubled his lead in set 2. Smith took the first leg, but more missed darts at D20 in leg 2 handed Wright the initiative.
A 148 checkout in leg 3 was quickly followed by a 124 on the bull for the set. An exhibition of punishment from the Matchplay Champion.

Wright started the set by winning his 7th leg of the match in just 14 darts, But he surrendered the set to Smith in the legs that followed. A 167 checkout to lead 2-1 from the Smith the highlight. Although by the end of the set, he had already tallied up 7 180’s. His winning legs in the set requiring a total of 39 darts.

Well and truly game on at this moment as the first set that required all 5 legs went the way of the Englishman. Wright produced his 3rd 100+ checkout of the match to level at 1-1, but Bullyboys scoring power kept him alive. Smith Produced a new record of a 180 in 7 consecutive legs on his way to the set. Although he did have to survive 2 set darts from Wright.

Back to back sets with the full allocation of legs. Wright put himself in pole position after winning the first 2. A 17 dart hold of throw backed up with an 11 dart break that also included 4 perfect darts. Smith broke back with an 11 dart leg of his own, before a drama free 15 dart hold took us all the way. 3 visits without a treble in leg 5 proved to be a killer for Smith though as Wright held in 17 for the set lead once again.

The standard continued to impress into set 6. All 4 legs were won in 14 darts or less, but crucially Michael Smith won 3 of those. Hitting his 14th 180 in 26 legs to win the 4th leg.

For the first time in the match we got a whitewash set, as the former World Youth Champion began to flex his muscles. Wright missed 4 darts at a double in the first leg and never recovered. Legs of 16, 15 and 11 put the Englishman ahead in the match for the very first time. Perhaps more importantly at this moment, the set in straight legs coming on the Wright throw.

Snakebite hit straight back in set 8. Although he began to look extremely fatigued, and had already been through a couple of changes of darts by this stage, as is standard Wright behaviour these days. The set could have been won in straight legs once again. Despite matching Smiths 180 in leg 3 Wright couldn’t clean up 25 and lost the leg.
Smith attempted to force a decider in the set. He found 2 maximums against the throw, but missed the bull for an 81 checkout. Wright duly levelled up once again.

Another deciding leg in a set, and another set win for Smith. 4 straight holds between the pair including a 103 checkout for Wright. He did then go to miss 6 for the set though, and is the case at this level, he got punished.

Smith took the early advantage in set 10, winning the opening 2 legs. His 3rd and 4th on the spin. He had also racked up 22 180’s by this point. A feat that would have tied the record previously held by Gary Anderson until it was beaten in the Semi-Finals. What happened next however changed the tide of the match. Peter Wright found an extra gear, and began to accelerate. He reeled off 3 legs in a row in 39 darts to steal the set and subsequently level the match.

At the end of this set, Michael Smith lead the match in 180’s, 140’s, Checkout Percentage, Average and Legs won but such is the beauty of set play, the match was level.

3 more legs in a row for Wright in double quick time. Just the second whitewash set of the match putting the former Champion just 1 set away from lifting the trophy once again. The set was won in 40 darts, that’s an average of 112.

The win takes Peter Wright level with Gary Anderson and Jocky Wilson as Scottish 2-time World Champions. Since winning his first World Championship he has now been victorious in 6 of his last 7 major finals. Given his pedigree in the last 3 years, you’d be foolish to back against him leaving the Alexandra Palace with the Sid Waddell trophy once again in the near future. A feat that would further push the enigmatic character firmly into the debate of stature in the all time greats.

A word for our runner up

It is likely this paragraph will not say anything that you haven’t read about Michael Smith. The man will win a PDC major title in the future. It is still very much a case of when, not if. In every defeat he suffers in these major finals, one can only sympathise with the pain and heart break Smith must go through. But lets not forget, the man that defeated him in this World Final very much went through a similar patch, and his career hasn’t turned out too badly has it? Ever the sportsman in defeat, it says a lot about a man how he carries himself during moments when he is at his lowest.

Commiserations Michael. Your time will come.