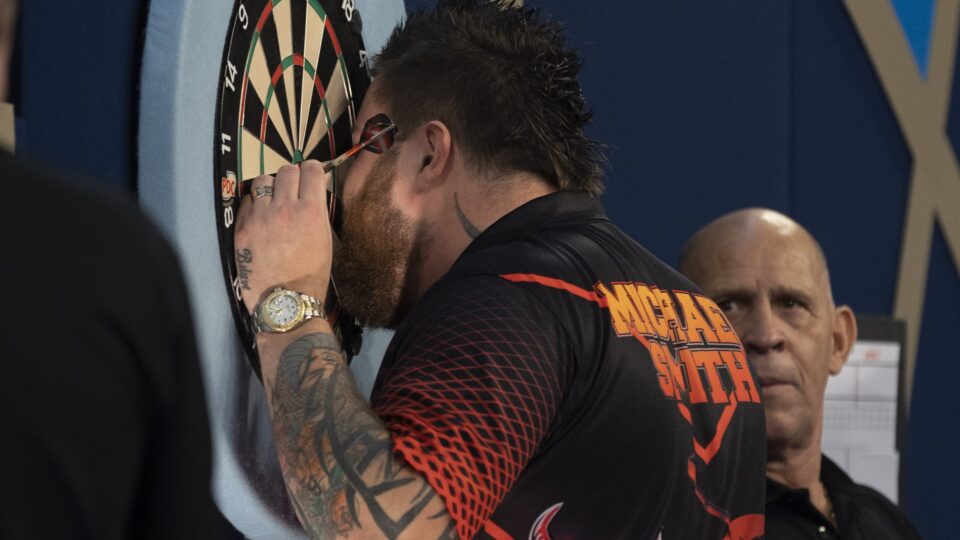 Michael Smith will take on Peter Wright in the 2022 PDC World Championship Final.

Michael Smith will attempt to win his first World Championship title against Peter Wright tomorrow. That is after he defeated James Wade 6-3 in the Semi-Finals.
Peter Wright will be looking to win his second title in 3 years, and defend his winners prize money against Smith. The Scot beat his compatriot Gary Anderson in the second Semi-Final 6-4.

4 years after his loss to Michael van Gerwen, Michael Smith returns to the World Championship final.

After accounting for the reigning World Champion, Gerwyn Price, Smith defeated James Wade 6-3 in the best of 11 set contest, and showed all the signs of a Champion elect. Yet again there was a composure about the Smith game. Something that has often been a criticism of the former World Youth Champion.

Smith took the opening set. Needing all 5 legs as both players held their throw throughout. That set lead was quickly doubled as the difference between the pairs scoring power in the tournament continued into this match. Smith’s competence on the outer ring also on show as a ‘Shanghai’ on the 19’s segment wrapped up the set.

Wade got his first on the board in set 3, in typical James fashion. A 121 finish sealing the 5th leg.

The match looked to get away from the Machine from here on in. Smith reeled off another 3 sets on the spin to lead 5-1. Although in another world that could have been 3-2 to Wade. Chances came and went for the left-hander.

Peter Wright is in to his third World Championship final. The Scotsman defeated Gary Anderson 6-4, breaking his opponents record of 22 180’s in a match on his way to victory, by firing in 24 of his own.

The World Champion of 2 years ago is one game away from regaining the world title, and defending the prize money that is set to drop off his world ranking. A win tomorrow will see Snakebite just £15,000 behind Gerwyn Price in the hunt for the coveted world number one spot also.

The clash with Anderson saw Wright start brightly. The reigning Matchplay champion taking the first 3 sets in blistering fashion with a leg aggregate of 9-4.
Anderson hit back with consecutive sets of his own. His now signature 92 checkout with 2 double 18’s winning the first set and starting the run.

Set 6 flipped back to Wright. For the 2nd match in a row, the enigmatic ace missed D12 for a 9 darter that would have been sure to take the roof off of the Alexandra Palace. Once again though, he kept his opponent at arms length, re-instating his 2 set advantage.

For the rest of the match the pair traded holds of sets. Crucially for Wright never allowing Anderson back on level terms. That despite Anderson taking a 2-1 lead against the darts in set 10. The Flying Scotsman missing a dart at D5 at the end of an 87 combination to force the deciding set.