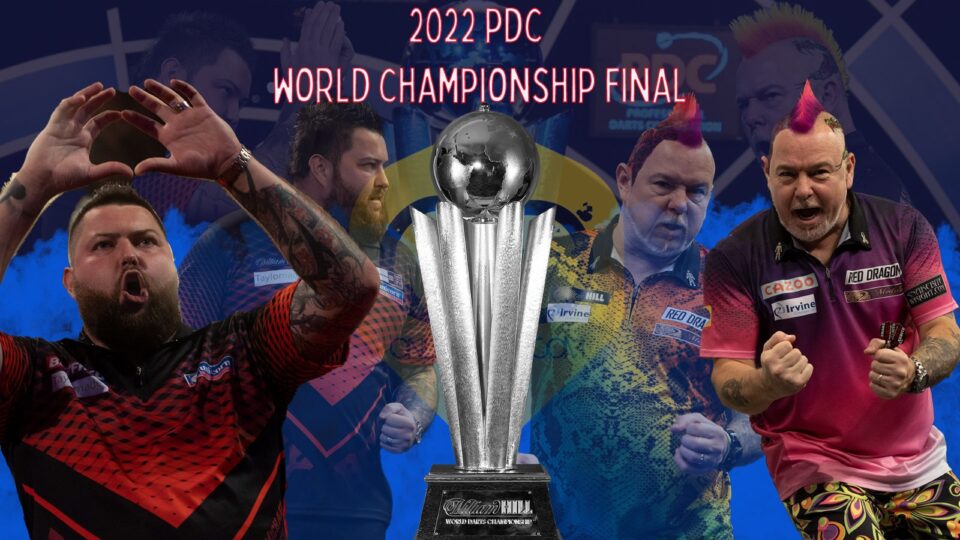 The PDC World Championship Final will be contested between Michael Smith and Peter Wright.

Both men lost to Michael van Gerwen in their first attempt at an Ally Pally final. But he’s not here to stop either of them this time. Tonight will either see Peter become a multiple world champion, or Smith will eventually fulfil his darting destiny.

Smith’s route to the final

Bully opened up his campaign with a 3-0 win over Ron Meulenkamp, the same opening opponent as to when he reached the final in 2019. He set the tone straight away with a 106 average and crucially 75% on doubles. A similar performance against William O’Connor set up a last 16 clash with the man of 2021- Jonny Clayton.

Smith was 2-0 down, hit less 180s, and had a lower average than the Ferret. But this Michael Smith has unbelievable grit and replied with a 161 from Clayton with a 121 out of his own to take us all the way. He pinched the game on D10 and was the first real sign that he had that winning feeling this year.

Next up- The Iceman. Smith chased him the full game and had to watch a nine darter be hit against him in the fourth set. The crowd did get involved, but the main factor in the result was Smith hitting over half of his doubles and Price only landing 6 maximums. That and Price missing two match darts of course.

Only James Wade could stop him now. The Machine played well, but was 5-1 down and only pinched a set because of a brilliant 121 out. The nerves did show as Bully’s trebles dried up a bit. But he got over the line in the ninth set to reach his second PDC World Championship Final.

Wright’s route to the final

A very comfortable first game for Wright saw him breeze past Ryan Meikle 3-0 without much fuss. Then the next match saw him 2-0 down to Damon Heta and then the full fate of the tournament changed. He changed to his gold darts and was unplayable in wiping out Heta 4-2 in the end.

A big match against Ryan Searle did not really live up to their previous Player’s Championship Final. Searle only averaged 88 and Snakebite was able to coast into a last 8 tie which was far less comfortable. Callan Rydz was 3-1 and 4-3 up over the Scot and was playing absolutely brilliantly. However, Wright broke the young Geordie’s spirit who eventually wilted after an epic match.

Arguably the game of the tournament was Anderson v Wright in the semis. Wrights raced to a 3-0 lead averaging over 105. But Gary fought back. The pair tangled all the way to 5-4 to Snakebite and he managed to stumble over the line with a trademark 12 darter.

Peter Wright has never lost to Michael Smith in a TV knockout match.

They met before in a final, the 2020 Masters Final in which Michael Smith missed three darts to become a major winner and Snakebite snuck in and won it on D8.

This year has seen two high profile meetings, Peter destroyed Michael at the Matchplay- but to be fair he destroyed everyone. The harder one to take would have been the 16-12 defeat to Wright in the Grand Slam where Peter reeled off eight legs in a row to complete a brilliant comeback.

There is 0.01 points between their tournament averages. The quality of play has seen the best two players reach the PDC World Championship Final.

Smith has shown more grit in this tournament than ever before. But this is a final, and his record in finals is 0 for 7.

Peter’s biggest obstacle will probably be energy. He has a knee injury and underwent an almighty battle last night. We seen him go flat in the Grand Slam against Price, it cannot happen again.

I have more faith in Wright’s longevity. But possibly this is because I have not seen enough of this version of the Bully Boy.