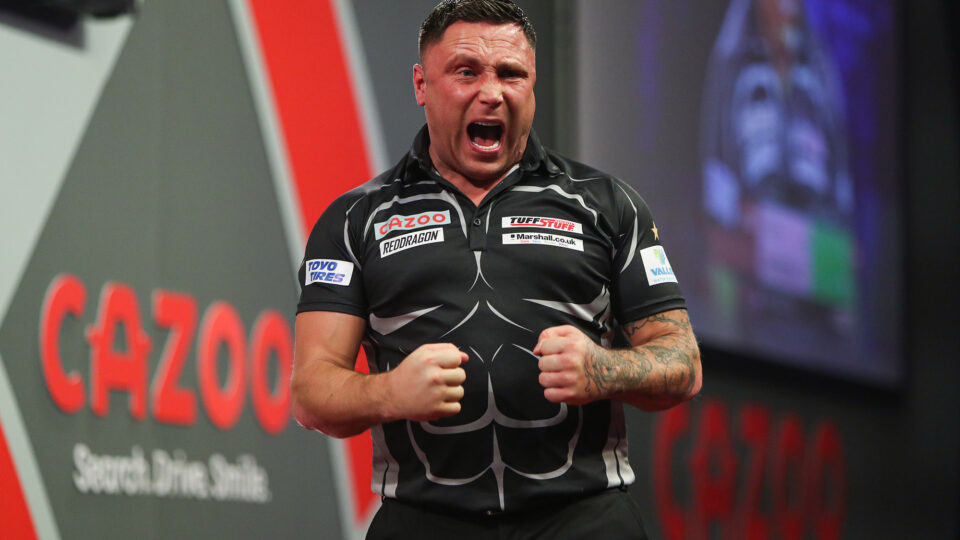 Price survives on night 5 and Gates rock the Palace

On Monday, world number one Gerwyn Price survived an early scare to advance to round three of the Cazoo World Darts Championship, while Jose De Sousa stunned Simon Whitlock after coming back from 2-0 down.

Price, who won the Sid Waddell Trophy in 2021, lost the first set to an impressive Luke Woodhouse, but the top seed turned on the style in the final stages to confirm his post-Christmas comeback.

Woodhouse, who defeated Ukrainian history-maker Vladyslav Omelchenko in his opener on Sunday, got off to a fast start, recording legs of 15, 14, and 15 darts to finish the first set with a 104 average.

The Welshman, however, restored parity at one set apiece with a clinical 83 outshot in a second-set decider, before capitalising on crucial misses from Woodhouse in set three to seize the initiative.

Price won six of the final seven legs to keep his bid for a second World Championship title alive, converting a 76 finish on the bull and completing a superb 150 checkout in the final set to win.

“I put myself under a lot of pressure. I’m defending a lot of ranking points and I really needed to get through this game,” reflected Price, who averaged 92, landed two 180s and hit 34% of his attempts at double.

“Regardless of the performance, I’m glad I came through that because I’m sure I will improve throughout the rest of the tournament.

“I was really nervous and I wanted to have a good start. Sometimes you try too hard, and towards the end of the game I began to play a little bit better.”

Whitlock took advantage of the Portuguese star’s slow start to build a two-set lead, but De Sousa rallied admirably and won eight of the final ten legs to complete the comeback.

This means the world to me,” said an emotional De Sousa, who converted 114, 127 and 136 finishes to progress to round three for the third straight year.

“When I was 2-0 down I thought I had nothing to lose, and I was able to change the game in my favour. I want to recover my game and make good performances. It’s the only way I can do this job.”

Williams dropped a dart midway through the third visit when he needed 141, but he recovered to complete the win and set up a round two match with Michael van Gerwen. Williams wired double 12 for a miraculous match-winning nine-darter.

“When I dropped my dart I was like: ‘Oh no!’ Then when I hit the treble 19, I thought it was going in,” admitted the 20-year-old, who is through to round two for the second straight year.

“It felt so good when it left my hand. It felt better than the treble 20 and treble 19 together, but I’m just buzzing to get through.”

Gilding, who won the fifth set decider after pulling off a skin-saving 105 checkout to tie the score at one apiece, delivered the goods by following up a 13-darter with a 120 finish to win.

Leonard Gates, Danny Jansen, Danny van Trijp, and David Cameron all won on their debuts on Monday, and all four advanced to round two at Alexandra Palace.

In his 3-1 victory over Dutch star Geert Nentjes, Gates captured the attention of the Alexandra Palace crowd right away. He then danced his way through to round two by winning three straight sets.

The American made a shaky start to the match, but he turned things around with finishes of 100, 111, and 128 to set up a meeting with Stephen Bunting, a former Lakeside Championship champion.

In contrast, Jansen overcame a scare to defeat Paolo Nebrida, the runner-up in the PDC Asian Championship, in a taxing five-set battle.

A 107 average in set four helped Nebrida rally to level the match after the Dutchman blew four match darts for a 3-0 victory, but Jansen recovered his composure in the decider to win.

On Friday, the day before his 26th birthday, Van Trijp, a winner of two Challenge Tour competitions in 2022, sank four 180s to set up a match against seventh seed Jonny Clayton in the second round.

While this was going on, Canadian veteran Cameron produced an incredible comeback to defeat Edhouse. He made it through six match darts in set three before winning nine of the final ten legs to book a match against UK Open champion Danny Noppert.