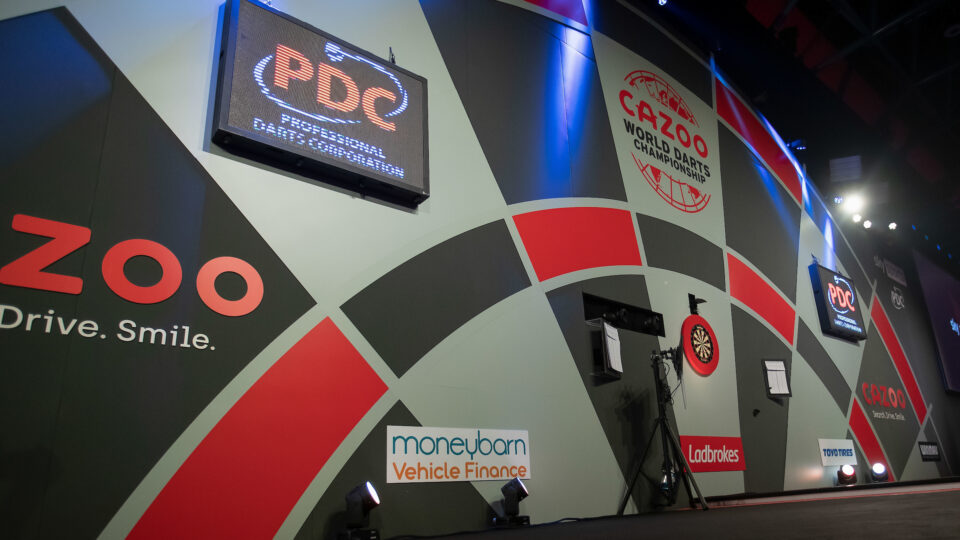 Over half of the first round has now been completed at the 2022/23 PDC World Darts Championship. Day Five will see it move even closer to completion.

The double session returns to its usual time slots (12pm GMT and 7pm GMT) following a weekend of disruption caused by the FIFA World Cup.

Here’s what’s coming your way on day five of the 2022/23 World Darts Championship.

The Iceman starts his quest for the title

2021 World Champion Gerwyn Price will begin his quest for a second world title today. The Iceman defeated Gary Anderson to lift the Sid Waddel trophy two years ago, but was defeated by Michael Smith in the Quarter-Finals last year.

Despite a 2022 campaign without a PDC major ranking title, the Welshman starts the tournament as the world number one, but that position is under serious threat. Throughout the season Price and Wright have traded spots a number of times, but with £500,000.00 set to fall off of Price’s ranking, there is plenty at stake.

Luke Woodhouse represents the first step on Price’s path to the final. The Englishman defeated Vladyslav Omelchenko in straight sets on Sunday afternoon, but will have to find another level if he is to trouble Price.

Portugal’s Jose de Sousa is the other seeded player in action on day five. The Special One is the former PDC Grand Slam of Darts Champion, but has struggled for form of late following a bout of covid-19.

His opponent, despite being outside of the top 32 has won a PDC TV title more recently then the Portuguese man. Step up Simon Whitlock. The recognisable Australian lifted the World Cup of Darts with his compatriot Damon Heta in June. Whitlock defeated Christian Perez in a tight encounter in round one, and De Sousa will be more then aware of the threat The Wizard possesses.

The Dutch arrive at the party

No less then 12 players in this years PDC World Darts Championship are from the Netherlands. Despite being well over half way through round 1, we have seen just one of them play so far.

Day five see’s a number of Dutch darting talents arrive at Alexandra Palace as they seek to impose themselves on the tournament.

Danny Jansen is the first in action. The young star picked up a Pro Tour title earlier this year, but his form in the back end of the season has struggled to match the hype. The Phillipines Paolo Nebrida will be his opponent who qualified via the Asian Tour event.

Niels Zonneveld will follow his compatriot on stage in the afternoon. Young Welshman Lewy Williams will be his opponent in a match that many will see as a pretty even encounter. Both players have shown they have promising futures ahead in the sport, but the near future may not be so bright for the winner. Michael van Gerwen awaits in round two.

Another youngster, Geert Nentjes will become the third Dutchman to play on day five. He opens the afternoon session against American Leonard Gates. The former baseball player turned pro dart player tasted tv success by winning the PDC North American Championship in June. Despite that victory, Gates has failed to make in on to the PDC circuit full time, meaning Nentjes starts favourite for this battle.

Danny van Trijp is the final Netherlands native in day five action. He has the honour of playing against 1996 World Champion Steve Beaton. The Bronzed Adonis is playing in his 22nd straight championships and has once again secured his spot on the PDC tour for next season. Van Trijp will be joining him as at our card holder in 2023 will be sure to push him all the way.

The resurgence of Andrew Gilding has been one of the stories of 2022 so far. Goldfinger had previously dropped off the PDC tour, but has revelled in his ascent up the rankings this season, reaching multiple ranking finals. He will open the days action against Rob Owen.

Stack Attack, like Gilding, had lost his Tour Card, but has secured it once again before the World Championships commence. The Welshman finished second on the Challenge Tour order of merit whilst also experiencing plenty of successes on the MODUS Super Series. He’ll be hoping that experience sets him up nicely for a crack at Gilding.

Canad’as David Cameron will be looking to avoid the same fate as his countrymen. Both Matt Campbell and Jeff Smith tasted defeat in round 1. The Seniors World Master will take on Richie Edhouse in the evening session. Madhouse has reached the second round on both of his previous PDC World Darts Championship appearances, and he’ll be targeting a hat-trick against Excalibur.