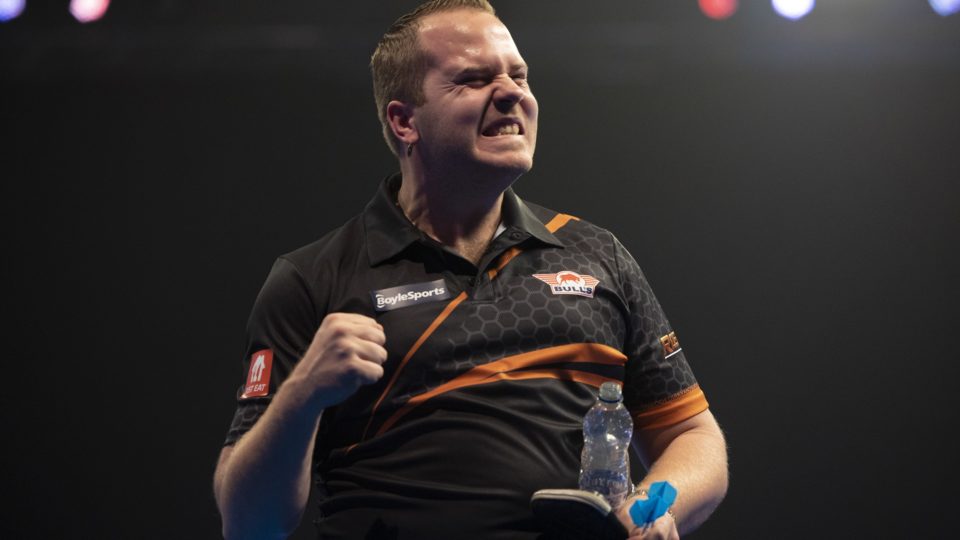 Dirk van Duijvenbode won his first ever title in the PDC on day three of the PDC Super Series.

The Aubergenius came through to complete the feat, beating countryman and debutant finalist Martijn Kleermaker 8-6 in a tense game.

It all but seals Van Duijvenbode’s debut appearance at the World Matchplay, while Kleermaker moves into the final qualification spot for the World Grand Prix thanks to his run today.

After losing in his first final at the World Grand Prix to Gerwyn Price last year, Van Duijvenbode went one better in his first Pro Tour final.

He beat David Evans, Jelle Klaasen and Jeff Smith to win his board, before seeing off Krzysztof Ratajski in the last 16. He beat Scott Mitchell in the quarter finals, before winning against Andy Boulton to seal his place in the final.

Kleermaker saw off John Henderson, Gabriel Clemens and Luc Peters to get through his board, before seeing off yesterday’s winner Michael Smith in the last 16. A last leg victory against Ritchie Edhouse, before a 7-5 victory against Brendan Dolan, got him the other spot in the final.

Van Duijvenbode started well in the final, taking an early 2-0 nil lead. However, Kleermaker would answer straight away, winning the next two legs to level, which included a 109 checkout. However, 28 darts later, the Titan was two legs clear again, halfway to his first tournament victory.

Four holds saw Kleermaker trail 6-5, before he produced the moment of the match. Harking back to the way Peter Wright saved his skin against Noel Malicdem at the World Darts Championship in 2020, he took out 302 in six darts, including a 140 checkout, to level the match at 6-6.

However, he then missed tops for a 111 checkout, and Van Duijvenbode hit a 72 outshot on the last dart to break and go ahead once more. Both missed plenty of darts for the 14th leg, but the Aubergenius finally found double 16 to win 8-6 and take the trophy home.

Andy Boulton’s run to the semi final sees him back in contention for a World Matchplay spot. He beat Jermaine Wattimena and Damon Heta en route to the last four, before losing to eventual champion Van Duijvenbode.

Brendan Dolan enjoyed another solid run, with wins against Mensur Suljovic and Rob Cross helping him to yet another semi final, before losing to Kleermaker.

Scott Mitchell and Ritchie Edhouse produced runs to the quarter finals to keep themselves in the hunt for a potential Blackpool place. Darius Labanauskas remains in 16th, just £750 ahead of Jamie Hughes.

View the race for the World Matchplay here.

Elsewhere, it was another day where Michael van Gerwen could not progress past the second round. After beating Gary Blades in his first game, he lost 6-1 to Gino Vos. He joined the likes of Dimitri Van den Bergh, Mervyn King and Nathan Aspinall who suffered early exits.

Finally, Raymond van Barneveld withdrew from the competition before his second round against Krzysztof Ratajski due to feeling unwell. It’s unclear whether he will play tomorrow in the final day of the Super Series.

View the full results from day three of the PDC Super Series here.