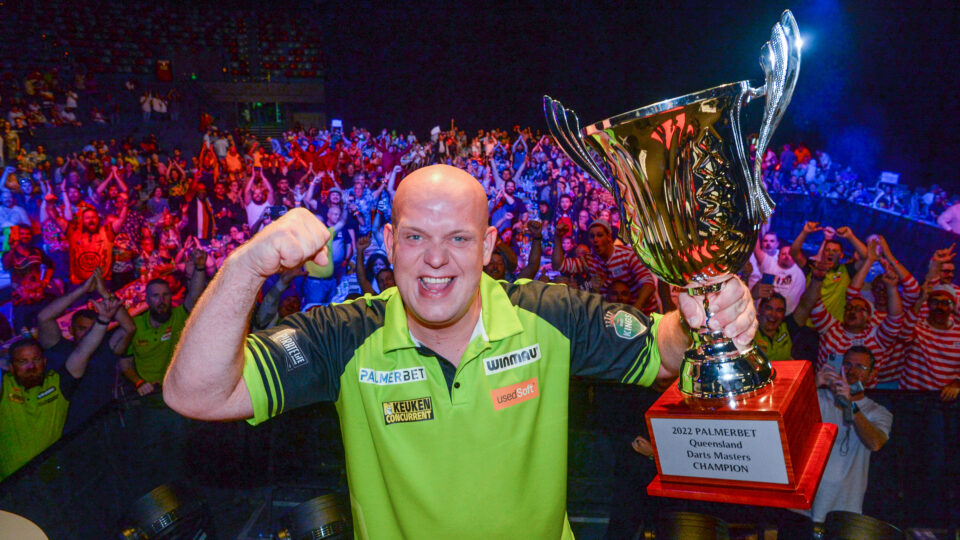 The 2022 PalmerBet Queensland Darts Masters were won by Michael van Gerwen, who defeated world number one Gerwyn Price 8-5 in Townsville to claim his 17th World Series of Darts title.

In the final, the world’s third-ranked player rallied from a 4-1 deficit as Price sought to exact revenge for losing to the Dutchman in the World Matchplay in Blackpool earlier this month.

Van Gerwen initially struggled with his finishing, missing 10 straight attempts at a double until finding his stroke and winning three successive legs, including a 140 finish in leg seven, to tie the match at 4-4. Price had appeared to be in control of the final.

Prior to van Gerwen hitting checkouts of 112 and 77 on his way to moving 7-5 in front, Welshman Price once more moved a leg in front at 5-4.

The 33-year-victory old’s marks an impressive comeback following wrist surgery that prevented him from competing in the World Cup of Darts in June.

“I am a winner, not a loser. Of course, when I lose I am sick, but I am a winner and I love to win trophies.

“I am glad I am back to winning ways.”

Price had earlier demonstrated class by ending Gordon Mathers’ dreams of competing in the semi-final.

Mathers did manage to win a leg to bring the score to 6-1, but Price then won with a 7-1 victory after throwing six darts in a row perfectly.

Simon Whitlock’s chances of making the quarterfinals were similarly eliminated by Price.

Whitlock had taken a 3-2 lead, giving the Townsville crowd hope of an all-Australian semi-final, but Price stepped up his game to win four straight legs, including one with the greatest finish in the competition (a 167), to win the match 6-3.

In the other semifinal, Van Gerwen and Joe Cullen faced off, with MVG defeating the Englishman 7-5 in a stylish contest.

Cullen overcame a 3-1 deficit to take the lead 4-3 before the Dutchman upped his game and took the lead 6-4. At 6-5, Cullen managed to recover a leg, but Van Gerwen’s superior finishing (landing all 100 of his double tries) was enough to give him the victory.

Cullen had earlier defeated top seed Dimitri Van den Bergh 6-4 in the Quarterfinals. The Belgian was attempting to become just the third player in World Series of Darts history to win three tournaments in a calendar year, after Phil Taylor and Gary Anderson