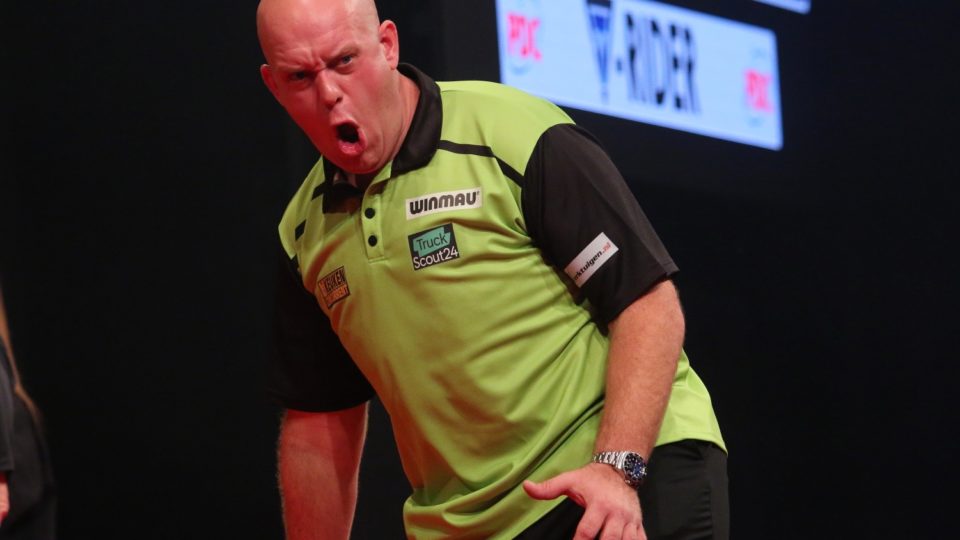 Michael van Gerwen was the only seed to win on night one of the BoyleSports World Grand Prix.

The world number one defeated Krzysztof Ratajski 2-1 in one of the great round one games in Coventry.

He sets up a round two meeting with Devon Petersen, who continued his great recent form with a 2-0 victory over Jose De Sousa.

Elsewhere on night one of the BoyleSports World Grand Prix:

Michael van Gerwen came through a battle against Krzysztof Ratajski on day one of the BoyleSports World Grand Prix. He beat the Polish Eagle 2-1 in the game of the night.

Van Gerwen had come into this tournament with questions around whether he was still the best player in the world. It looked like he’d started to answer those critics in the first set, as he whitewashed Ratajski 3-0 in legs, taking just 41 darts to do so and averaging over 110.

However, The Green Machine let The Polish Eagle back in the contest. After sharing the opening two legs of the second set, Ratajski held throw once again to lead 2-1. Van Gerwen then missed eight darts at a double to take the set into a deciding leg, allowing Ratajski to catch up and eventually hit double 16 to take the game into a third set.

Ratajski, despite averaging nearly 20 points lower than van Gerwen, punished more missed darts at a double from The Green Machine in the next leg. Hitting the bullseye to leave seven from 91, MvG missed two darts to hold throw. The Polish Eagle then hit double five to break and go 1-0 ahead, the first time he was ahead in the match.

It was then Ratajski’s turn to miss crucial darts at a double in the next leg. Three darts went astray, allowing van Gerwen to hit a magical 103 outshot to break straight back and level the set at 1-1. Both then held their throw to send the match into a decider, before van Gerwen found double 12 in the final leg to win the set 3-2 and the match 2-1, bring a classic contest to an end.

After sharing the opening two legs of the first set, the turning point came in the third leg. De Sousa missed four darts at a double to go 2-1 ahead, leaving the African Warrior to find a 100 checkout, in which he hit two double tops to break the throw. Petersen then took the first set by finding a madhouse double one finish, after De Sousa once again missed tops to level the contest.

The second set was one of the best sets of darts seen on the Grand Prix stage. After each held throw again in the first two legs, De Sousa looked like he’d taken the advantage in the third. He hit back to back 180s, before checking out 61 on double 18 to break the throw and lead 2-1.

Petersen would not go down with a fight though. After leaving 52 thanks to a magical 180, he almost did not get a shot at it, as De Sousa missed double 12 for a 144. However, the African Warrior found double 16 to break back and throw for the match.

The fifth leg saw three 180s, two from De Sousa and one from Petersen. However, once again, the Portuguese man could not find the double to take us into a decider, leaving Petersen to finish 93 on the bullseye to win a magical game and move into the second round. He faces MvG on Thursday, having recently beaten him 6-0 in the Autumn Series.

Anderson and Van den Bergh take out Cross and Smith

The first set between Cross and Anderson was an absolute classic between the pair. Anderson carved out chances on Cross’ throw, but could not find the break. As such, the set was level at 2-2 going into the deciding leg. There though was where Cross slipped. He took 12 darts to get into the leg and only scored 36, as The Flying Scotsman hit a brilliant 103 to take the first set 3-2 with a 15 dart hold of throw.

Voltage hung in the second set initially, going 1-0 up despite taking six darts to find the double to get in. The next two legs though were where he lost the match. First, he missed a big 14 to set him a shot at double 16 for a 2-0 lead, leaving Anderson to hit the same double and hold his throw for 1-1.

Then, the crucial break of throw occurred. Cross, who’d already missed three for the leg, was on 18 and looking for single two to leave double eight. However, he strayed once again into the single 15, only getting himself one chance at double one which he missed. Anderson would then find double ten with his last dart in hand for a 2-1 lead and a break of throw.

Despite missing six darts for the following leg, and Cross missing three himself to level up the second set, The Flying Scotsman held his nerve. He hit double five to knock the number five seed out and win the match 2-0, setting up a second round tie against Danny Noppert.

Dimitri Van den Bergh started brightly against Michael Smith in his round one game. He won the first two legs, breaking throw on double 16 after Bully Boy missed the bull for a 170 checkout. Smith would not go lightly though, and punished Dimitri for missing double 18 for a 116 outshot, hitting double top to get the break back.

After holding his throw, Bully Boy took the first set to a decider, where Van den Bergh produced some stunning stuff. He left 42 after nine darts, find double 18 on his first dart hitting and five treble 20’s en route to leaving 42 after nine darts. He took it out with ease, finding double 16 for an 11 darter and the first set.

The second set was another see-saw battle. Despite Van den Bergh having a chance to break in the first leg, both players held their throw to force the second set into a deciding leg. This time, Van den Bergh would not blow his opportunity, as he hit a 132 outshot by going 25, treble 19, bull. It was a marvellous way to round off a solid performance by the Belgian, as he beat Smith 2-0 to go into round two.

King and Van Duijvenbode cause upsets but Noppert safely through

Mervyn King condemned James Wade to his ninth first round loss at the BoyleSports World Grand Prix. The King beat The Machine 2-0 to move into round two.

After splitting the opening two legs, it was King who got the first break of throw, finding double eight for a 2-1 lead. He then held his throw with a 68 shot, taking the opening set against the darts 1-0.

Wade then seemed to get back in the contest, breaking straight after the restart by hitting double top, after King himself had missed bullseye for the leg. However, The Machine then handed the initiative back in the next leg. He missed six darts to take a 2-0 lead in the set, when King eventually finished on double one to get the break back.

This seemed to inspire the former Grand Prix runner up. King then found two 180s in the next leg to go 2-1 up, before winning the match with a superb 66 shot to take the set 3-1 and win 2-0 in sets. This means that Wade now has won just one game at the World Grand Prix in six years.

Dirk van Duijvenbode beat Mensur Suljovic 2-1 on night one of the BoyleSports World Grand Prix, in a game that will not go down as a classic.

The first set was a scrappy affair, and set the tone for the whole match. With the score at 1-1, the third leg saw Suljovic miss ten darts at double 16 to go 2-1 ahead and hold his throw. Eventually, after being miles behind on the scoring, van Duijvenbode eventually found double 18 to go 2-1 up with a 22 dart break of throw. He won the set with a 27 dart hold of throw on double four, when Suljovic missed four darts to level the set.

The second set was a more routine one for The Gentle. After going 1/17 on the doubles in set one, he went 3/5 in set two, whitewashing the Dutchman to level at 1-1. Van Duijvenbode would fight back though, and got the early break in the final set by finding double top for a 1-0 lead. Suljovic would not back down though, and stepped up to punish two missed darts at a double from van Duijvenbode to level at one leg all in the final stanza.

It was to be the Dutchman who came out on top. Back to back 140s left him on 52 in the third leg, which he duly took out to take a 2-1 lead and throw for the match. Despite Suljovic hitting a 136 to leave 40 in the next leg, he would not get a chance to throw for it. Van Duijvenbode found tops himself to win the set 3-1 and the match 2-1, in which both players averaged less than 75.

Danny Noppert became the first player through to round two on night one of the BoyleSports World Grand Prix. He beat Ryan Searle 2-1 in the opening game.

It was Searle who came out the stronger of the two. He whitewashed the first set 3-0, taking just 42 darts to do so. Noppert came firing back though, producing a whitewash second set of his own to level up at 1-1.

The crucial moment of the match came in the third leg of the deciding set. With the score at 1-1 in legs, Searle had the throw, but took eight turns to find a double and get into the leg. This allowed Noppert to pile on the pressure, having just taken out a 127 shot to level the match. Noppie would find a 135 and a 180, before hitting double six to get the crucial break of throw. The Dutchman then sealed the match with a 15 dart hold, finding double top to move into round two.

Should either player return a positive test, their scheduled opponent would then receive a Bye into the second round.

Who’s join us this evening? #ODLiveLounge

@rockstar_13_ will now be the number one seed at the European Championship next week!

Full report from the final day in Riesa ⬇️ ⬇️

Just four of the stories from Riesa today We frea

Who was your performance of the day? Some many ta

Absolutely stunning from Ross Smith today on the E