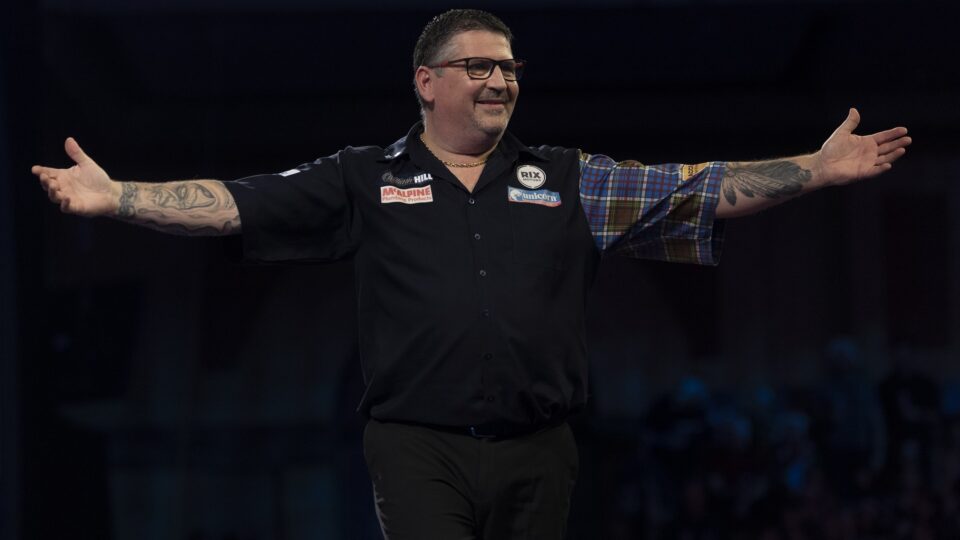 The final day of the PDC World Championships in 2021 saw Gary Anderson produce some of his finest form to eliminate 2018 winner Rob Cross.

Peter Wright also moved through without having to get out of second gear against Ryan Searle.

Elsewhere on Day 13 of the PDC World Championships:

Anderson rolls back the years

A  brilliant display from The Flying Scotsman now makes him a serious threat to claim his third World Title. A switch of darts saw him nail 7 maximums and maintain 42% on doubles.

It was Cross who claimed the first blow, pinning D6 to hold the first set. From there, Anderson took control. Levelling with a whitewash set ad then moving ahead with the help of a 170 out.

Anderson flew out to a 3-1 lead, but Cross fired back with a 144 out to claim set 5. Gary then missed a dart at bull for the match and had a nightmare miscount where he bust 129 when he thought he wanted 139.

But it was Anderson that kept his head in the final set with all legs won on tops. He looked vintage tonight and it will be a great tie with Luke Humphries on New Year’s Day.

Peter Wright coasted into a quarter-final showdown with Callan Rydz after a rather straightforward 4-1 win against Ryan Searle. The match was nowhere near the brilliant Player Championship Final in November.

The Scot averaged 98 which was 10 points higher than his opponent. A sluggish opening set saw Peter move ahead due to some dodgy doubling from Searle. Though 2-0 was achieved with an 11 darter on D16.

In a rare highlight from Heavy Metal he won the third set with a 151 out but his form plummeted from here on in. Snakebite won the fourth set without reply and then tied up the match with the help of a 132 out in the last set.

It wasn’t amazing from Peter, but he looked much more solid than Searle who will probably be a bit gutted as to how he performed tonight.

James Wade eased into the last eight of the competition by whitewashing Dutchman Martijn Kleermaker.

The Machine did not land a single maximum but his 40% on the doubles was enough to unleash a prime James Wade performnace.

Wade won the first set without reply and wrapped up the second with a vintage 116 checkout. The next set went the distance but he held in 14 darts to have no trouble.

No drama for Wade in the last set as he pinned his favourite D10 to tee up a quarter-final showdown with Mervyn King.

Mervyn King and Luke Humphries both came from 3-1 down to progress in the PDC World Championships.

King and Raymond Smith’s game was short on quality with the pair both averaging in the 80s. It was Smith that took a healthy 3-1 lead, which included checkouts of 104 and 119.

But Mervyn fought back to level at 3-3 and pulled out a magical 124 out in the final set in which he whitewashed.

Dobey and Humphries’ game was much better with both men averaging 97 and producing 25 maximums between them. Hollywood stole the first set with a 94 out and doubled his lead easily in set 2.

But Chris missed three darts to go 3-0 up and Luke got his foot in the door. Dobey pulled out an 11 darter to break and lead 3-1 in sets and was just one away.

Then Humphries fought back to 3-3 and we had to go to sudden death in the deciding set. Despite another 11 dart leg from Dobey, he ran out of steam in the end. Luke pounced on mistakes and scored much better, eventually stumbling to D1 to win the match and drop to his knees.

Callan Rydz booked himself a quarter-final spot with a convincing 4-1 win over Alan Soutar.

The Scot started the better and found an 84 finish to break in the first set. Callan missed three darts to hold and fluffed his lines, giving a huge advantage to Soots.

There was no looking back from there, though. From that point Callan Rydz won 12 out of the next 13 legs to extinguish the fireman from Arbroath. The only leg he got was pinched with a 110 and Callan was running riot.

The Toon superstar has only dropped one set all tournament, and having averaged 96 with 48% on the doubles, he doesn’t look like dropping much more.