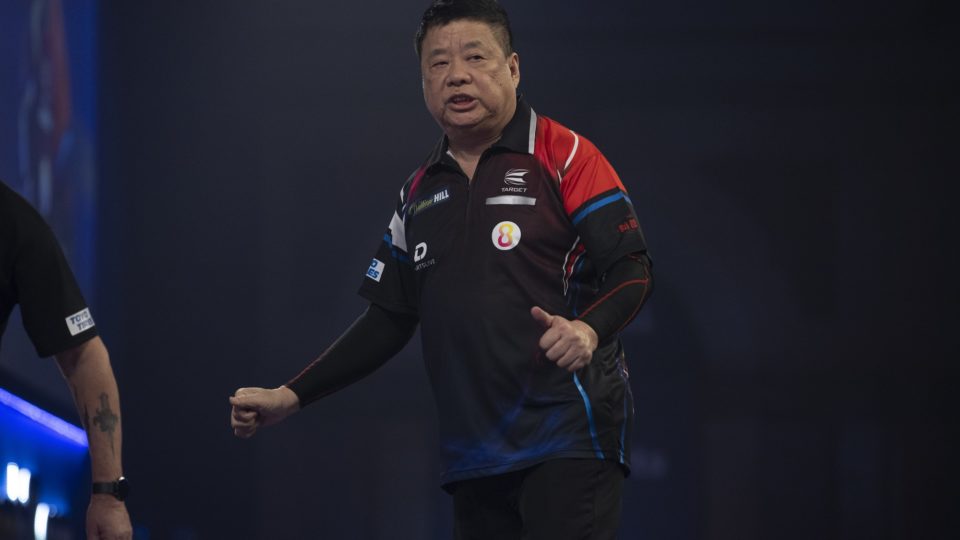 ‘The Machine’ barely had to get out of first gear as he disposed of Callan Rydz on Day 4 of the World Darts Championship.

Wade won the first and third sets at a canter, Rydz had 3 darts for the second set in what would have given us a level game. Instead, James cleaned up to advance to the third round in a straight sets win.

Earlier in the session, Paul Lim came from 2-0 down to stun last year’s quarter-finalist Luke Humphries.

Wade at his clinical best, Lim rolls back the years.

Having made the final in two out of the last three TV tournaments, James Wade has recently caught the attention of fans and pundits alike. Nothing will change after tonight’s performance.

The first set was over in the blink of an eye as Rydz was nowhere to be seen, averaging only 68. Untroubled, the veteran Wade was able to stroll the set 3-0.

However, the second set is where the match could have went either way. At 2-2 in legs and Rydz on D12, it looked likely that Wade would be in for a battle. In reality, Rydz missed all three attempts, allowing James to swoop in and pinch the leg with a 100 checkout on D10.

The final set was similar to the first, but Rydz did manage to pinch a leg against throw unlike the opener. It seemed to only make Wade more determined though, and he finished the match with a 93 average with 44% on the doubles. A bit of a statement made to the rest of the pack- if one was even needed.

Paul Lim was looking at a similar fate to Callan Rydz as he found himself 2-0 down to ‘Cool Hand’ Luke Humphries. Despite leaving 81 after 9 in the opening leg, he fluffed 6 darts to clean it up. And that pattern emerged in the early stages with Lim struggling to convert his good play.

In legs, Humphries led 6-2 after the second set after seeing off 283 in 6 darts. But the Singapore Slinger was not disheartened as he claimed the third set- and this is where the madness began.

Paul took out a vital 121 on the bull to save his skin in the set, where Luke had a dart at tops that would have ended the match. Two legs later and the veteran ignored the bull on a 124 which he hit, taking us to a decider.

Amongst some quality, the penultimate leg saw Luke miss 12 darts at a double to hold and go 2-1 up. Lim himself chased around 7 darts before getting to D4 and then going on to seal the win in the next leg. He’ll face the Matchplay Champion, Dimitri van den Bergh, in the next round.

After a brilliantly bizarre walk-on in which Dirk entered the stage with a giant aubergine, Bradley Brooks was the player that stole the show early on.

Brooks, fresh off his World Youth Championship win, made an incredible start as he won the first set with a 109 average without losing a leg. The second set was much the same with Bradley swaggering his way to a 2-0 lead. He even had time to wink at the camera between shots.

However the Aubergenius did eventually show up to the party, as he went on a rampage in winning 9 legs on the trot to end the match. Brooks did have the darts in set 5. But a few missed doubles and even a big single saw to his demise.

A great encounter, but van Duijvenbode would look to start a bit quicker in his next tie against Rob Cross…

It took till Day 4 of the World Darts Championship to see the first seed to crash out- and that title belongs to Jamie Hughes.

Yozza was clearly struggling with an injury throughout, and later revealed that he is to have surgery on his elbow in the new year. Adam Hunt could not show any sympathy though, claiming the first set without Yozza having a dart at a double.

Adam Hunt did not have to work as hard as he did against Lisa Ashton, with his opponent only mustering up 2 legs in the match. The ‘Hunter’ did achieve a solid average of 91.77, but he’ll know whoever he plays of Cross or van Duijvenbode will show more of a fight.

What else happened at Day 4 of the World Darts Championship?

John Henderson survived what was a real slog against Finland’s Marko Kantele. Henderson missed 27 darts at a double in the game in averaging 91.

The Highlander actually won the game 13-8 in legs, but his trait of missing doubles at key times almost saw him crash out. Kantele even had a dart to send us to a sudden death leg, but for once Henderson only gave him one visit to the board. His opponent in the next stage is Jonny Clayton…

Mickey Mansell played to a reasonable ability in whitewashing New Zealander Haupai Puha in sets… and legs. Puha only had 4 darts at a double in the entire match and despite Mickey playing pretty well, Haupai was nowhere near it today.

Darius Labanauskas set up a round 2 match with Simon Whitlock after a straight sets victory over China’s Chengan Liu. The Chinese qualifier will forever be iconic for his Westlife walk-on, and he played well in patches. But the Lithuanian was way too consistent for him and averaged 96 to send him home in straight sets.

Wayne Jones saw off Ciran Teehan in what was the closest match of the afternoon session. Both men averaged 86 in a tight affair, but it was the experience of Jones that allowed him to keep the Irishman at arm’s length to get a 3-2 victory.