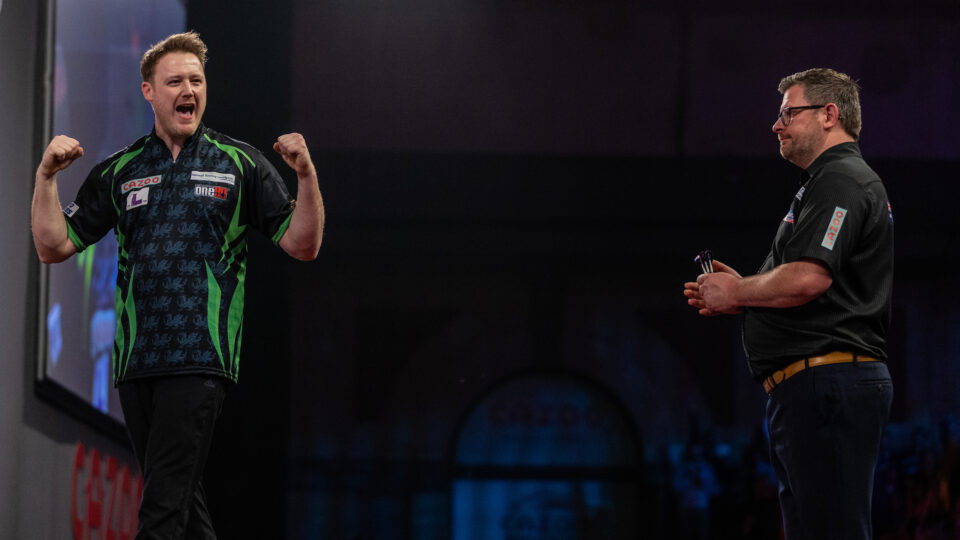 The Machine was beaten by Jim Williams in 5 sets to become the only player inside the worlds top 20 to not make it to round three so far.

Former two-time World Champion Gary Anderson had no such trouble as he defeated Madars Razma.

The World Championship is obviously the one everyone wants to win. In James Wade, we possibly have the greatest player never to do so. But as the years tick on in his career, the chances of him lifting the Sid Waddell trophy seem to be diminishing.

The 2023 PDC World Darts Championship now represents another opportunity passed by. Wade perhaps started this tournament at much longer odds then we are used to seeing the Englishman at. A representation of a season that has not lived up to the previous few on tour.

That didn’t stop him starting this match as favourite though, and after winning the first set it looked like business as usual.

Williams responded by winning the second set, winning all 3 of his legs in 15 darts, included the third with a 119 checkout.

The duo then traded 3-0 sets on throw before The Quiff took the final set, and with it the spot in round three.

Cool Hand fell behind to German Florian Hempel after both the first and third sets, but each time managed to respond. Humphries has won 4 European tour titles this year and has risen up the world rankings to number five before this tournament started. A big part of that has been his performances in front of tv cameras in the last two years, with Luke regularly commenting that he plays better on tv.

His performance against Hempel today may not go down as one of his greatest, but winning with his B game in a comeback that he had to work for just might set him up for another deep run up on a PDC Stage

Dirk van Duijvenbode was the double twelve away from hitting the first 9-darter of the 2023 PDC World Darts Championship. The Aubergenius produced a run of 11 perfect darts (Carried on from the previous leg) before pulling the attempt at the double inside.

That attempt was to level the match in the deciding set as Van Duijvenbode found himself trailing to the Tour-Card less Sedlacek once again.

The Czech darter made life uncomfortable for Van Duijvenbode throughout with a combination of solid finishing in key moments and a relentless scoring power that saw him hit 34 scores of 100 in the match. That timing was on show for him to win the third set after The Dutchman had missed 3 darts from 60 for the lead.

Van Duijvenbode hit 12 maximums in the match, but perhaps the most important were the ones that came in legs five and six in the deciding set. As the match was at its most tense moment, he delivered his free-flowing best to secure the win.

Anderson off and running at the Palace

Gary Anderson’s love of Alexandra Palace is clear for all to see. The Flying Scotsman has reached the semi-finals or beyond on 6 of his last 8 visits to Muswell Hill.

His attempt to make that 7 out of 9 got off to a start with a win over Madars Razma on his 52nd birthday.

The Latvian sent all 4 sets played to a deciding leg, but was only able to convert one of those into a set on the board. The match played out as one of the most enjoyable to watch so far. Anderson producing glimpses of the ability that took him to back to back titles. Razma demonstrating his full range of scoring on the treble 19 segment.

But the resolve Anderson showed to win 3 deciding legs, as well as a promising all around stat line with have his fans confident he may just produce yet another run at the PDC World Darts Championship

Krzysztof Ratajski secured passage to the third round with a win over Danny Jansen. The Dutchman defeated Paolo Nebrida in a tense encounter in round one, but wasn’t able to up his level to match and under-par Ratajski.

The Polish Eagles form in 2022 hasn’t lived up to his own high standards of the previous couple of years on tour, but as most will say at this point. The win is more important than the performance.

Ryan Searle will very likely subscribe to the same school of thought as the Polish Eagle. Heavy Metal defeated Adam Gawlas in straight sets to move into round three. However, the Englishman has plenty more in the tank should he need it.

Gawlas had already come through a tight encounter with Richie Burnett to reach this stage, but Searle appeared to be a step too far for the youngster.

The former world youth championship finalist actually had more attempts at a double in the match, but Searle was by far the more clinical on the outer ring. Setting up a date with Jose de Sousa in round three. 7

The script for Mensur Suljovic’s win over Mike De Decker could be copied from the previous two matches.

Once again the seeded player produced a comfortable win, despite being under-par in their performance. In fact, Suljovic, Searle and Ratajski’s averages could be separated by just 0.05 points.

De Decker, despite a promising year on tour, succumbed to The Gentle in straight sets.

Van der Voort looked comfortable on the Alexandra Palace stage as he proved once again to be an excellent front-runner. Taking the opening set to nil. As the match went on Menzies made each set more competitive, but with a doubles percentage of just 20%, The Scot would have needed a big drop off from his opponent, who finished with an impressive 56%