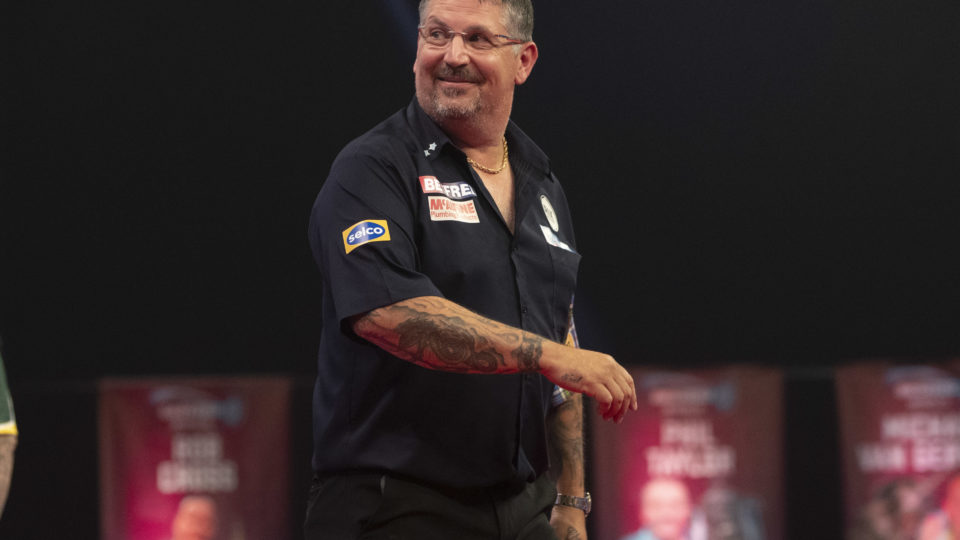 Gary Anderson and Dimitri Van Den Bergh will meet in the final of the 2020 Betfred World Matchplay.

The Flying Scotsman overcame Michael Smith 18-16 in the first semi final, in what was a contender for game of the tournament.

The Dream Maker beat Glen Durrant 17-15, in what was another thrilling semi final in Milton Keynes.

Anderson and Smith put on a show

The first five legs all went with throw, with The Flying Scotsman going into the first interval leading 3-2. Anderson got the break straight out of the interval, taking advantage of missed doubles from Bully Boy to go 4-2 up. Anderson would find a second break of throw in the 10th leg, as he went 7-3 up at the end of the second session.

The two time World Champion went 8-3 up, but Bully Boy found some inspiration. He reeled off four straight legs, punishing missed darts from Anderson to get the game back on throw at 8-7 going into the third break.

Smith got the game getting back to 9-9, but this seemed to gee up Anderson. He reeled off five straight legs, hitting a magnificent 128 in the process, to go 14-9 up and within three legs. Bully Boy came roaring back though, reeling off six straight legs in a magnificent spell of darts to lead 15-14.

That would be the only time in the match he would lead though, as Anderson broke straight back to level at 15-15. The game was level at 16-16, meaning that overtime was needed, and Anderson produced some serious quality. He took out two legs in 27 darts, winning the match 18-16, bringing an absorbing contests, which featured 21 180s, to an end.

Speaking after his win, Anderson told Online Darts: “I ended up fighting myself. It’s not what the other boys do, I’m fighting myself. I get these stupid little stupid moments, and it’s driving me nuts to be honest, but we got there in the end.

Dimitri Van den Bergh also made the World Matchplay final. He beat Glen Durrant in another brilliant game this week.

Durrant began the match with a brilliant 151 checkout. He eventually wen 3-1 ahead, but the Belgian fought back. Van den Bergh won four legs on the spin to go 5-3 up, and led 6-4 at the end of the second session.

Van den Bergh went 9-5 up, but Duzza got the game back to 9-8. However, the three time World Champion saw two darts at D18 missed for 9-9. Van den Bergh managed to win the leg, and had a 12-8 lead at the fourth session interval.

Durrant would not go away easily though. He managed to dig in and find a way back into the game. He hit five of the next six legs, including a 76 and 97 out, to regain the lead at 14-13.

After his win ecstatic Van den Bergh told Online Darts: “From the moment I woke up today, to the moment I was playing on that stage, until the last double, I wasn’t nervous. I think that if I feel a little bit nervous, I am so much better.

“I managed to win, and I’m so proud of it. But hey, there’s still one more game to play. I’m not finished.”