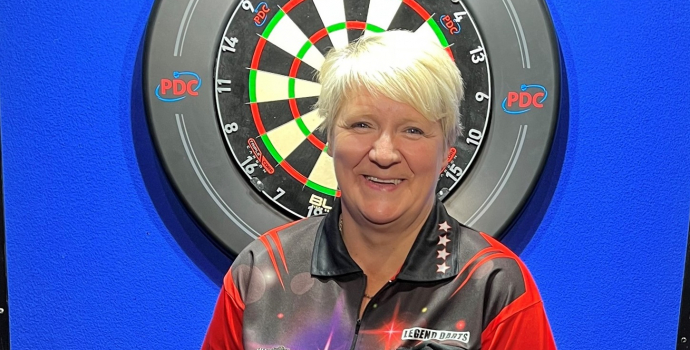 Lisa Ashton earned up her sixth Women’s Series title of the season while Lorraine Winstanley picked up her maiden title as the PDC Women’s Series returned in Barnsley today. The fascinating race to feature in the inaugural Women’s World Matchplay will go down to the wire on Sunday with a number of big names still not assured of their place.

The ‘Lancashire Rose’ was already assured of her place at Winter Gardens having won five of the eight Women’s Series events played so far. Her quest for a sixth started in menacing fashion, averaging 100 as she beat Sharon Godbeer 4-0. She then defeated Catherin Handley, again without dropping a leg. Rhian O’Sullivan was next, Ashton averaging 93 in a 4-1 win. Remarkably, Ashton had opened the second leg with back to back maximums before going on to lose the leg.

Four times Women’s World Champion Ashton would average 87 in both of her next two matches. The first was a 4-1 win over Rhian Griffiths before being pushed to a decider in her quarter final with Corrine Hammond.

Katie Sheldon stood between Ashton and a place in the final. Sheldon hit a superb 160 out to go 2-1 up on throw before Ashton held and broke for 3-2. Sheldon returned the favour to go 4-3 up and missed match darts in leg 8 before Ashton checked out 96 in two darts. A high quality final leg saw Ashton close out victory in 15 darts with Sheldon waiting on 56.

Ashton raced into a 3-0 lead in the final against Aileen de Graaf, including a spectacular 158 out in leg two, before the Dutch woman responded in leg four. De Graaf opened leg five with 136 and 174 but double trouble allowed Ashton in to go 4-1 up. She then closed out victory in the very next leg in 17 darts.

Lorraine Winstanley picked up her first PDC Women’s Series title while also guaranteeing her spot at the Women’s World Matchplay by winning Event Ten. Having swept aside Rebecca Brouse 4-0 and then Louise Pearson 4-1, Fallon Sherrock was her opponent in the last 16. A high quality encounter, including an 11 dart leg from each woman, went to a deciding leg where Winstanley claimed the only break of the match at the most crucial time, checking out 120 as Sherrock waited on just 43.

Tina Neylon was beaten 4-1 in the quarter finals to set up a semi final clash with Rhian Griffiths. Winstanley found herself 4-3 down and survived match darts in leg eight before holding. She then found another deciding leg break of throw to set up a final with Rhian O’Sullivan.

It was O’Sullivan who looked set for the title, having led at 2-0 and 4-2. The Welsh woman missed match darts in legs 7 and 8 before three trebleless visits at the start of the decider handed the initiative to Winstanley. She seized the opportunity with both hands and claimed victory along with the £1,000 winner’s prize.