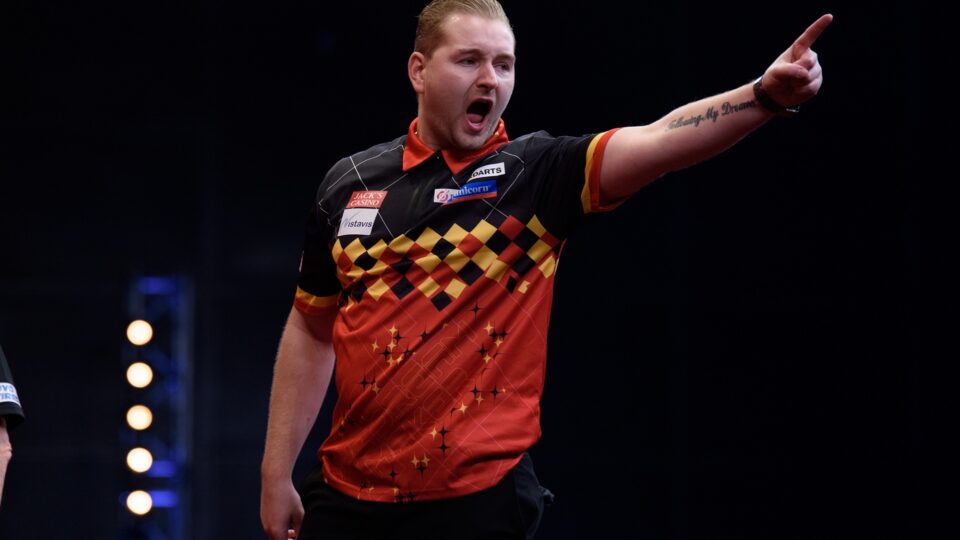 Following on his win at the Nordic Masters, Dimitri van den Bergh picked up his second World Series of Darts title in as many weeks, beating a trio of home favourites on Saturday evening in the process. As well as the trophy, he also scoops the £20,000 top prize.

After a record breaking six host representatives made it through Friday’s first round action, the odds looked stacked in favour of a home victor as Saturday’s play got underway.

‘Dancing Dimitri’ started his evening against Jermaine Wattimena, who had ended the hopes of Jonny Clayton the previous evening. Van den Bergh set the tone with a 107 checkout in the opening leg and raced into a 5-0 lead. Wattimena stopped the rot in leg 6 to avoid a whitewash but van den Bergh closed out a 6-1 success in the next leg, averaging almost 99.

Next up was Danny Noppert, ‘The Freeze’ having edged past Vincent van der Voort in a titanic quarter final deciding leg. ‘Noppy’ had 10 maximums to his name in his two matches so far but struggled on the outer ring and so it continued in the semi final. Van den Bergh opened up in frightening form, winning the first four legs without reply, including 10 and 12 dart legs. Noppert then responded with back to back legs before Van den Bergh sank a 170 checkout take leg 7 for a 5-2 lead. As Noppert’s double troubles continued, ‘Dimi’ powered towards the finish line, ending with a near 104 average.

Dirk van Duijvenbode had seen off the challenges of Martijn Kleermaker and James Wade to make it into his second televised final but it started badly for the ‘Aubergenius’ as, similar to his semi final, van den Bergh opened up an early 4-0 lead. Darts for 5-0 came and went as van Duijvenbode finally got himself on the scoreboard before ‘Dimi’ regained control with 14 and 13 dart legs respectively. Again, it was ‘Dimi’ who had chances before van Duijvenbode got another leg to make it 6-2. It was only a minor blip for the Belgian however as he won the next two legs to claim the trophy. Six maximums for the man from Antwerp, averaging almost 105.

It concluded a weekend of near dominance for ‘Dimi’. He defeated four home players on route to the title. Across his four matches, he dropped just seven legs. He hit 13 maximums. He had a 44% checkout across the tournament. He also hit a 170 checkout.