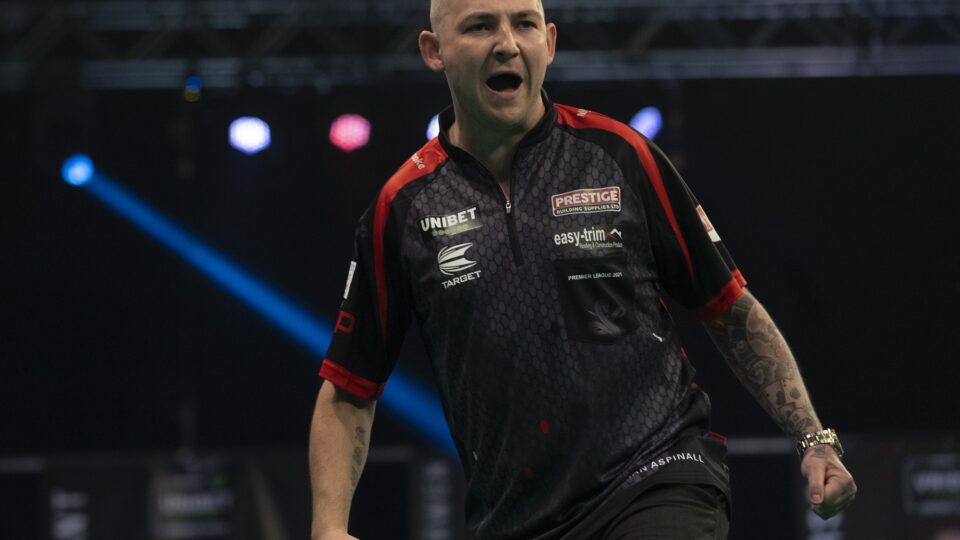 On the night fans were welcomed back to Milton Keynes, The Asp cruised to an 8-3 victory over previous table topper Michael van Gerwen.

After losing top spot on night 12 to The Green Machine, The Asp wrestled it back with a dominant display, in front of an adoring crowd in Milton Keynes.

Van Gerwen got on the board in the next leg, hitting double 10 to reduce the deficit to 3-1. However, another stunning 120 outshot, this time going treble 20, double 20, double 10, got The Asp three clear once more. This seemed to rattle the five time champion, as he missed two in the next leg to again cut the gap. It meant that Aspinall, who’d missed bull for a 124 the previous leg, could clean up 25 and go a double break clear.

It looked like that The Green Machine would fight back however, producing 122 and 110 checkouts in back to back legs to cut the gap to two. However, a 13 dart hold from The Asp killed the momentum, going 6-3 ahead. Another missed dart at tops from Van Gerwen in the 10th, allowed the former UK Open winner a shot at 12s to get a point, and he took it out.

The final leg saw Van Gerwen miss a dart at the bull to keep it going, and once again, Aspinall pounced. A double 14 shot completed the victory, and put him back in pole position to claim the £25,000 league bonus.

Jonny Clayton produced a fantastic performance to dispatch Gary Anderson, increasing his chances of finishing in the Play-Offs on debut. The Ferret won 8-1 to move fourth in the table.

Anderson in the previous leg had missed bullseye for a 121, and missed the bull for a 121 again to win the seventh. Clayton then found a double four for a 61 outshot and a 6-1 lead. In the eighth leg, The Flying Scotsman missed a second dart at bull for a 125 checkout, and Clayton once again pounced, finding a 124 on the bull to secure a point.

The Masters Champion bust 25 in the final leg of the contest, but got another shot at it after Anderson missed a dart at tops for a double double 80 outshot. Once again, The Ferret did not need a second chance, this time finding double eight to take a well deserved victory.

Jose De Sousa battled through a tough game to defeat Dimitri van den Bergh 8-6, keeping his spot in the Play-Offs.

Three holds of throw saw The Special One lead 2-1, before The Dream Maker missed a dart at 16s to level. De Sousa punished, finding double eight for a 70 checkout to lead 3-1.

Another hold gave the Portuguese Man O’Scores a 4-1 lead, before missing three darts at 14s to go a double break in front. This allowed Van den Bergh to clean up 32 on double four, to remain one break behind.

Both held twice, making the score 6-4 to De Sousa. Both then missed darts to win the eleventh leg, but The Special One finally hit double eight for a 16 darter to get the point. Van den Bergh found a 13 darter in the 12th to keep the match alive, before De Sousa missed bullseye for a 164 to wrap up the contest in the 13th.

The Dream Maker hit double 16 for a 51 outshot to force a decider, and left 69 after 15 in the last leg. However, The Special One found a double 10 with his last dart in hand, to take out 58 and win the game. It’s the first time Van den Bergh has not been in the top four of the 2021 Premier League Darts table since the opening night.

Peter Wright produced an excellent performance to mathematically stay in the race for Finals Night. He beat James Wade 8-4 in the last game of the night.

It was Wade who took the early momentum, taking just 28 darts to win the opening two legs. However, Wright responded immediately, finding an 11 dart leg to break, before holding in 16 to level the game up at 2-2.

Another 11 dart leg break of throw gave Snakebite the lead for the first time, before Wade squandered five darts to level the game in the sixth. Wright punished, hitting double 11 for a 16 dart hold, winning his fourth leg on the spin.

A double 10 finish for an 81 shot saw Wade cut the gap to one, before Wright held on double 16 to move two clear. Snakebite then squandered a dart at tops for a 6-3 lead, as Wade cleaned up 11 to once again go back within one.

However, that was to be the last leg The Machine would win in the evening. A magical 103 checkout, followed by a 12 dart break and a 19 dart hold, saw Snakebite get across the line to remain in the fight.