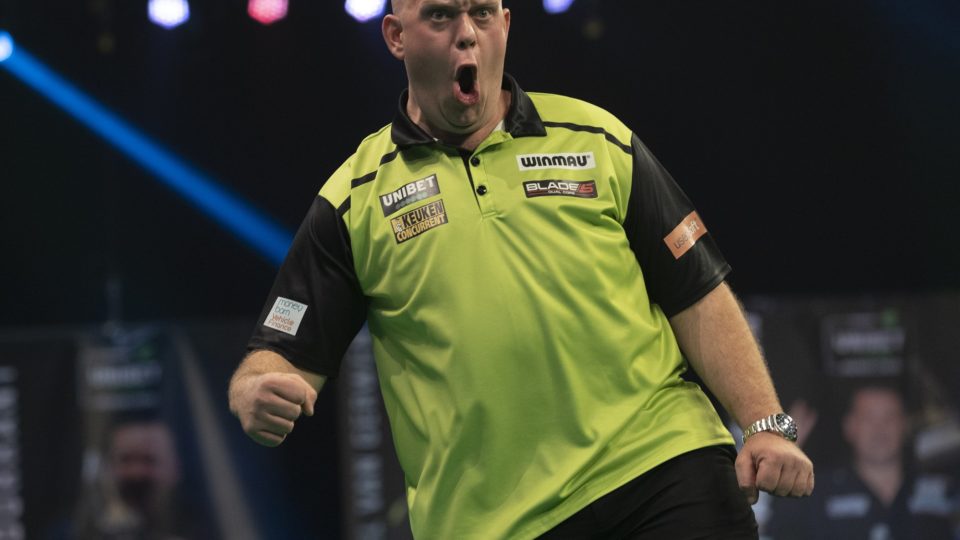 A sensational performance from Michael van Gerwen saw him defy a 110 average from James Wade to move top of the Premier League Darts table.

Other result went the way of the Dutchman, but he produced a 106 average and 3 ton-plus outs in a display worthy of a league leader.

Elsewhere on Night 12 of the Premier League:

An inspired Michael van Gerwen averaged 107 in sweeping aside James Wade who averaged 110 himself.

The Dutchman has been open about his frustrations at his recent form, but will have no complaints tonight. The opening two legs seen the pair exchange 12 dart holds and that set the standard for the match. Wade missed the bull to break in leg 3 and allowed MVG to take 78 to hold. The Machine then held in 14 darts to level at 2-2.

Legs 5 and 6 were crucial for MVG winning the match. Wade missed 2 darts at a double to break and Michael didn’t give him a second chance. He then produced a stunning 135 out with Wade sat on 64 to break and roar his way to a 4-2 lead.

Both were fantastic in the match, with MVG finding a 104 out and Wade nailing a 132 out along the way. With the match at 7-3 van Gerwen started the leg with his third 180 and finished it with a 128- his third ton-plus checkout.

Mighty Mike lives up to his reputation as he now sits at the top of the Premier League Darts Table with 17 points. Wade is just outside the top four but will be encouraged by tonight’s performance.

Gary Anderson put himself well and truly back in the race for the playoffs after an 8-4 victory over third place Dimitri van den Bergh.

The tone was set early as Dimitri kicked off with a 180 and Gary replied with a 177 in leg 1. Dimi took that one, with Gary holding in 11 darts to equalise. They held until leg 5, when the Belgian missed the bull for a 126 and Anderson punished with a 123 out.

Gary followed that up with a 146 out on D13 to move 4-2 up and then a 12 darter moved Gary 5-2 up. The Scot sailed to a 7-2 lead and looked absolutely golden. Van den Bergh did apply some pressure in getting it back to 7-4, but a beautiful 92 checkout with D18-D18 shut the door in the Matchplay champion’s face.

Gary hit 6 180s, achieved a 80% checkout rate and averaged 108 to stamp his authority on the match. He moves to 12 points, just 2 outside of the playoff spots. Dimitri remains third averaging 104, and did not really do that much wrong.

Jonny Clayton beat Nathan Aspinall 8-6 to move to 5th placeand  level on points with Jose De Sousa. Aspinall missed 23 darts at a double in the match that saw both men miss key chances.

The poor doubling started early with Aspinall missing two darts the break in the opener before Clayton sealed the hold with a 48 out. The Asp then hit back to back 180s in the next leg but required six darts at the outer ring to seal the leg.

The Ferret was then allowed to hold in 24 darts eventually claiming the leg on the madhouse and edged ahead again. Asp equalised with a 62 out, before Clayton secured a point on D10 in leg. Aspinall will rue a missed D20 in the final leg but Jonny showed no mercy and pinned the same target to steal the two points.

Aspinall is now only a point ahead of De Sousa and Clayton in the Premier League Darts Table.

Jose De Sousa was dominant in beating Peter Wright 8-1, with the Scotsman averaging only 84.

Unsurprisingly, Snakebite started the game with yet another set of darts. Jose broke in 15 darts in that leg, meaning that Wright decided to move back to his diamond darts. Jose raced into a 4-0 lead with Peter averaging as low as 71 at this point.

Leg 5 saw Wright switch back to the darts he started with and that seen a slight improvement in scoring. He set up a chance at 80, missed the first dart outside the board and could not recover. The Special One swooped in and pinned a 62 out for a break and 5-0, and then he moved onto 6-0.

The 2020 World Champ did avoid the whitewash however- squeezing in his last dart at D5 with De Sousa on a double. Despite going 6 perfect darts into the last leg, Snakebite fluffed 4 darts to get a second leg on the board. Jose sailed in on D15 to win 8-1 and despite only managing two maximums he averaged 103.

The result sees Peter marooned at the foot of the table on 9 points, whilst Jose’s playoff push grows stronger at 14 points. 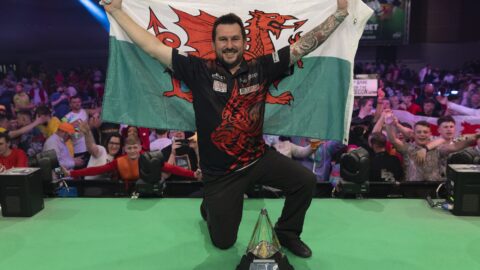 We are now live come join us in the Live Lounge