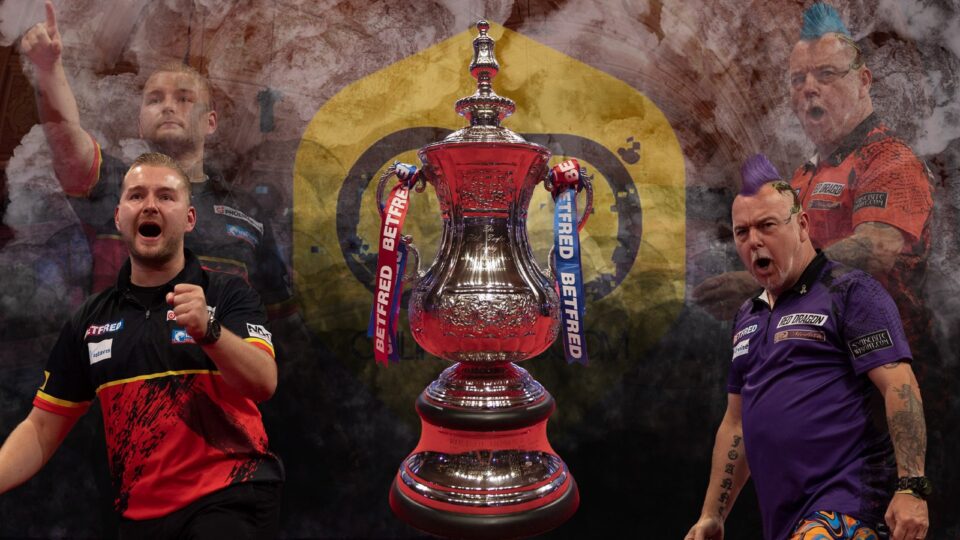 We’re now down to two players left to compete for the Phil Taylor Trophy. Tonight’s final sees the former landlord (Wright) meets his former lodger (Van den Bergh) in the final. The Dream Maker stayed with Snakebite during the first coronavirus lockdown, when he could not go home to Belgium.

Our team of writers predict how the final will go, and who they think will win the Betfred World Matchplay final.

I’ve been saying it since last Monday, and my opinion hasn’t changed. Peter Wright is winning this title.

Usually I’m the first to call him out for opening his mouth, but this time he’s backing it up.

No matter how good Dimitri has been this week, Snakebite is finally getting his hands on the Phil Taylor trophy.

For me, I just can’t look past the man who’s been telling us all week he’s going to do it. Here we go again, I thought.

But Peter Wright has been magnificent. The best player on that famous stage this week and I see that continuing tonight. Dimitri’s efforts defending the title deserve huge credit, he’s well and truly put to bed the questions about whether he only won it because it was behind closed doors.

We’ll see another quality performance from Dimi, but I’m backing Snakebite to outlast him in a fitting final for a wonderful week.

On our Live Lounge preview show, I thought this would be the time when Michael van Gerwen would finally regain his form. However, on Thursday, I tweeted that if he keeps playing the way he has done, Peter Wright would win this title.

After breezing past Danny Noppert in round one, he made a 105 average look pedestrian against Joe Cullen in round two. He cruised past both Michael Smith and Michael van Gerwen, averaging 110.37 against MvG, the highest ever in a Betfred World Matchplay semi final.

Simply put, he is on fire. It’s similar to his World Matchplay of 2019, when only a ridiculous effort from Daryl Gurney in the last eight stopped him from picking up the Phil Taylor Trophy for the first time.

The two best players of the week have reached the showpiece occasion, as it should be. Dimitri Van den Bergh has been exceptional in the defence of his title, particularly his performance to knock World Champion and world number one Gerwyn Price out. However, I just do not think he’s got what it takes to live with the version of Snakebite we’ve seen this week.

Both men have been impressive on most fronts, but van den Bergh seems to be missing more clusters of doubles than Wright, and at more crucial times as well.

This minor flaw of the Belgian, together with the simple fact that Wright is playing to a better standard than his opponent , leads me to no other outcome than a Snakey success.

What a final we have to look forward to tonight.

I feel honoured to witness a final which consists of Dimi playing so well. More importantly Peter Wright using the same darts for a whole week.