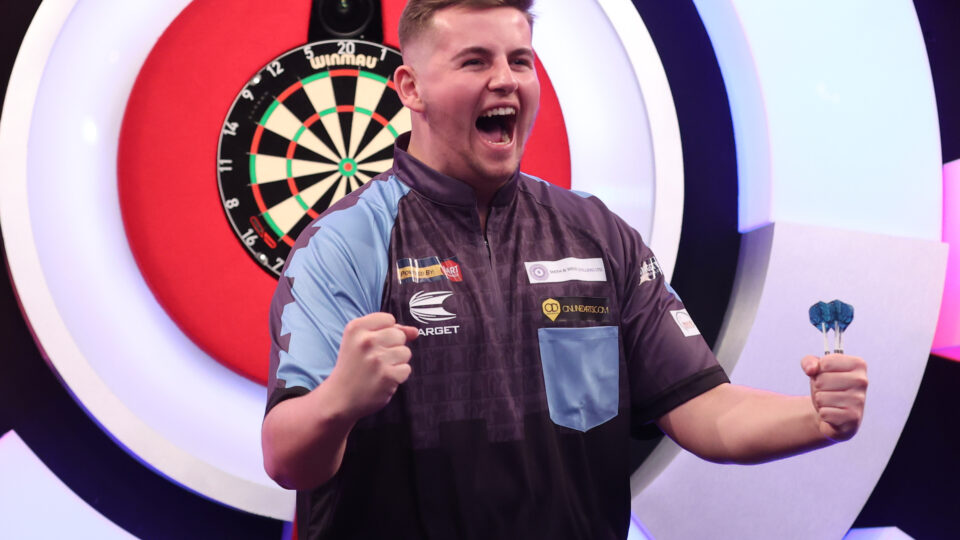 Jarred Cole put in a masterful performance to defeat three-time World Champion Martin Adams in the first round of the 2022 WDF World Championships at Lakeside, with five other players advancing to the second round.

Many saw ‘Wolfie’ as a likely victor this time around, but the consistency and power scoring of Hertfordshire’s Cole, who qualified for the tournament by winning the Lakeside qualifier in December.

Cole pushed it up a notch in the second set, kicking things off with an 11-darter after winning the first set with some consistent darts. Cole wrapped off the second set with a pair of 15-darters to run out a 2-0 victory with a 92.7 average. Adams, who recorded three 180s during the match, soon broke back but couldn’t keep up the momentum, and Cole won 2-0 with a 92.7 average.

Cole, who is currently regarded as a title prospect, returns to the Lakeside stage in the first game of Monday’s evening session to face 16th seed Antony Allen.

In a 2-0 win over New Zealand’s Landon Gardiner, Scotland’s McEwan defied his debut status and set a precedent for the rest of the competition by recording the first ton-plus average of the event.

The opening set was won in just 42 darts by ‘Chucky,’ the defending British Classic winner, and while Gardiner escaped the whitewash by winning the second leg of the second set, McEwan simply had too much. With a 121 checkout and a 101.32 average, the former Scotland international qualified for the final 32, where he will face England’s Aaron Turner.

Dave Prins has had a career resurrection over the last nine months, booking his first Lakeside appearance in eight years after a succession of outstanding performances on the tour, including winning the Isle of Man Open last month and performing well at the first World Seniors Championships. In the fourth game of the evening, he continued his good form by defeating Wales’ Mark Graham 2-0.

In a tough first set, the players were neck-and-neck, but Graham’s nine missed darts at a double proved the difference-maker, as Prins won 3-1. Prins, dubbed ‘The Badger,’ took control of the second set with a 132 checkout to break Graham’s throw, then held in the third to secure victory. Prins’ next appointment is with a Welshman, this time the highly-fancied Mike Warburton.

Haines of Swindon cruised through fellow debutant John Scott, dropping only one leg in a 2-0 victory over the reigning Reykjavik International Games champion. Haines will be full of confidence coming into his second round match with top seed Brian Raman, who finished with an average just shy of 90.

Meanwhile, O’Sullivan went one better, blanking Paula Jacklin in the first round of the Women’s World Championship. In a performance that will have sent a message to the other players in her half of the draw, O’Sullivan, the new Wales captain, won all six legs in 19 darts or less.

Marjolein Noijens, who defeated fellow rookie Amanda Harwood, has joined O’Sullivan in the last 16. Throughout the 13 legs, the two teams were quite similarly matched, but Noijens took advantage of some fortunate breaks to win the game 2-1

Laszlo Kadar established himself as a talent to watch in the Men’s event with a 2-1 comeback victory over Sweden’s Andreas Harrysson.

After dropping the first set 3-0, Kadar levelled the match with some excellent finishing, taking out 104, 135 and 96 in consecutive legs. When Harrysson was 2-0 ahead in the final set, he squandered six match darts, allowing Kadar to win and go to the last 32, where he will face 2016 World Championship semi-finalist Richard Veenstra.

In the other game of the session, Ben Hazel won a scrappy game against another debutant in the shape of New Zealander Haupai Puha. Double trouble cost both players but in the end it was ‘Mr Ben’ who had enough to get over the line; he’ll know though that he’s got to step up a few gears when he meets teenage sensation Luke Littler in the last 32.

Rory Hansen of Canada overcame Scotland’s Mark Barilli in straight sets in his Lakeside debut, who, like Prins, was returning to the Home of World Darts after a long absence.

Both sets followed a similar pattern, with Barilli dominating the first set before his Canadian opponent fought back and showed a more clinical finishing instinct in the second. Hansen took out 119 to complete the comeback from 2-0 down in the second set to take victory after threatening a dramatic finish a number of times earlier in the match. Next up for ‘Relentless’ is a match against Nick Fullwell, the 12th seed.

Thompson, an Australian veteran, won the opening set 3-1 and took an early break in the second to pull within a leg of the victory. Hogan, on the other hand, fought back, breaking back and surviving two match darts before hitting 126 on the bull to tie the match at one set apiece.

Thompson won 3-0 in the third set to keep his spotless record in the first round of the World Championships intact. In the last 32, ‘Thommo,’ an Australian World Cup winner, will meet Neil Duff of Northern Ireland.

Suzanne Smith and Jo Clements played in the final of the Slovak Open a little over a month ago, with Clements winning 5-2. It was a similar pattern in this case, except Clements had to go to a last-leg decider to defeat her English opponent.

Following a 3-1 loss in the first set, Clements won four consecutive legs to tie the match and take the lead in the deciding. In the final set, all five legs went on throw, and Clements held her composure to take out 20 and seal the victory. Clements will face Kirsty Hutchinson later this week for a place in the quarterfinals.

In the evening’s other match, Priscilla Steenbergen won her maiden Lakeside match after a tough battle with Darlene van Sleeuwen of Canada. The first two sets both ended 3-2, despite the fact that doubles can be difficult to come by. Steenbergen surged through the gears in the final, winning the set 3-0 and the match 2-1 with finishes of 115 and 74. In the last 16, she will face Corrine Hammond of Australia.