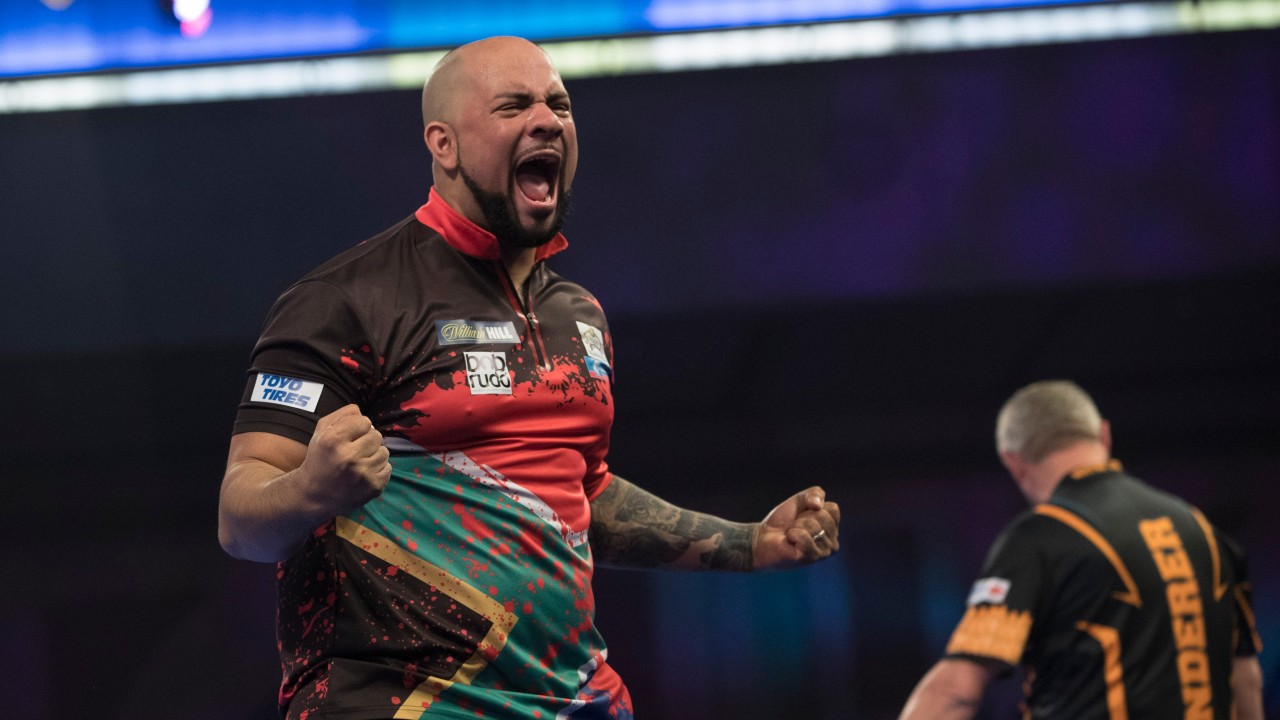 European Darts Championships day 3 round up as eight became four. Now we have our semifinal lineup in what will be a thrilling final night of action from Germany. Read below how the night unfolded.

Devon Petersen produced a scintillating performance to defeat Ian White at the Quarter-Final stage of the European Championships.

The African Warrior recovered from a slow start on the outer-ring to force his way in to tomorrow’s final session.

Elsewhere Peter Wright booked his spot in the semi’s with a 10-6 win over Steve West, and James Wade beat Willie O’Connor 10-4.

In the other game of the night, Jonny Clayton battled past the Grand Prix runner-up Dirk van Duijvenbode.

For much of the final game, Devon Petersen cut a frustrated figure up on stage.

The South African ace scored exceptionally for the entire evening but was unable to make that advantage pay on the scoreboard. Despite chances in all of the first five legs, the match remained on throw at the first interval.

Yet more chances came and went in the second mini session, and despite an early break from White, we entered the second break level. A pair of clutch legs allowing Petersen to recover from a 5-3 deficit.

In the final session White carried on where he had left off. In all six of the legs he won tonight, his opponent hit a maximum against him.
The crucial moment eventually came in leg thirteen and it turned to be massive. Petersen checked out a match high 143 with Diamond sat on just 32 for a break of throw.

From that moment, Devon never looked back, and went on to win the next and final three legs in just forty-one darts.

Despite hitting just 10/26 of his double attempts Petersen finished with a 106.3 average, and if he can produce that again, will be a real handful for James Wade tomorrow.

Snakebite Peter Wright once again looked imperious in his quest for the title.

West declared yesterday that should he win the event he would be retiring from darts, though that comment may have been a little tongue in cheek. Given his spot in the draw that was always likely to be a tough ask, despite already accounting for Mensur Suljovic.

It was another game marred a little by the presence of a small crowd. Both players were on the receiving end of audible shouts from the spectators as they threw for doubles.

Wade one step closer to title

Former champion James Wade is 2 games away from defending the prize money he picked up at this event 2 years ago.

The machine swept aside Willie O’Connor 10-6 in the nights opening encounter with a clinic on double hitting.

The Englishman finished with 10/16 attempts at a double being successful. Add that to a 98 average and he is more than capable of winning the tournament on that form. Especially as half of his finishes were combinations between 60-100.

O’Connor himself did not play poorly, but was restricted to the odd dart at the end of a combination for much of the encounter, and couldn’t force enough pressure on to Wade.

This result sets up a fascinating semi-final with Devon Petersen. If the South African has the same troubles finishing tomorrow we could be in for a real treat and contrast in game style!

Clayton clambers into the final day

For Jonny Clayton, the outcome of tonight will be all about the result.

It would not be unfair to say this game did not live up to the standard of the other 3 encounters, but the Ferret won’t mind that come the end of the day.

He defeated Dirk van Duijvenbode 10-4  to stop the big Dutchman progressing to back to back TV finals.

The match went with throw for the first 9 legs, giving Clayton a slim lead. That’s not to say Van Duijvenbode hadn’t had chances up to that point, he’d just been unable to capitalise.

The key break came in leg 10 as Clayton hit the second interval leading 6-4.
From there, he was comfortable as he won the next 4 legs to wrap up the match.

Judging by the rest of the tournament so far, if he repeats that performance tomorrow he could be in lots of trouble, however he has around 24 hours to put it right before he duels with the reigning world champion, Peter Wright