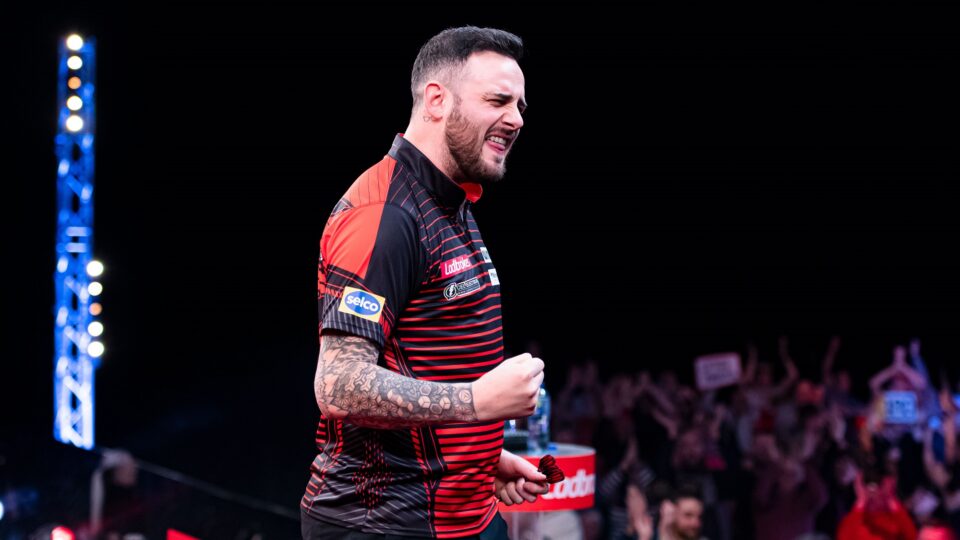 Also on Finals day we saw;

The final started in a nervy fashion with both players playing holding throw comfortably, as there was no real pressure from the opponent. With Joe winning the bull in the practise room this meant he lead at the break.

The first break of throw came from Joe in the sixth leg and it was followed by an 87 checkout to take a 5-2 lead. It wasn’t the only one break in this session as Chizzy found one in the ninth and followed it up with an 82 checkout to level things.

It was Rockstar who then took advantage with two comfortable holds of throw either side of an 84 check out on the Bull to break to lead by three. Chisnall held but a 180, followed by a 24 out moved Cullen just two legs away going into the final break of the Masters.

After break Chisnall holds throw comfortably before Joe Cullen finds a beautiful 126 check out to move a leg away. Joe Cullen made hard work of it, missing 10 match darts before finding double 18 to win Ladbrokes Masters 2022.

Dave Chisnall defeated 2021 Masters Champion 11-6 to be the first player in Masters Final, which ended the love story of The Ferret and Milton Keynes.

The game didn’t start well for Chizzy after an early break from Jonny, however he responded in style by winning the next three legs for the lead. The second session swung the way of Clayton which left us all square after 10 legs.

Dave Chisnall then began to take control and reeled off five straight legs which was too much Clayton. Jonny was able to get one leg back but Chisnall then fired in a 180 in the last leg before finishing the game on tops.

Both players averaged around the 100 mark in the early stages and it took 10 legs to see our first break of throw. It was the Rockstar who got it. It was quickly followed up by more breaks, three in total.

Joe Cullen then went on a rampage to win the remaining legs in the third session to move just one leg away from a place in the final.

Cullen then won a flurry of legs before Jose closed the gap with a break of throw in the final leg of the session to close the gap to 9-6.

Cullen moved just one away, before Jose kept the fight alive, before Joe Cullen got over the line in the 19th leg to set a final with Chisnall.

Dave Chisnall was the first player to book his place in the last four. He defeated Michael Smith 10-8 in the opener.

The game was fluttered with missed darts at a double, with 47 darts missed on the outer ring between the two players. However, it was Dave Chisnall who got over the finish line and took out impressive checkouts of 153 and a 125 which included two bulls.

The win for Chizzy meant he was playing the winner of the Welsh clash.

Gerwyn Price started the stronger and took four of the opening five legs. The Ferret though found another gear in the second session and it was his turn to take four legs in a session.

Clayton carried on the good form after the break winning the next two legs and taking control of the game for the first time. The Ferret was able to hold onto to the lead and didn’t let the outstanding 147 finish from Gerwyn Price stop his run to that finish line.

The penultimate Quarter Final went all the way as Jose de Sousa progressed with a 10-9 win over Simon Whitlock.

The Special One hit a 141 checkout on his way victory, and once he took out tops to win he knew he had either Cullen or MvG in the Semi Finals. Whitlock showed signs this weekend that is form is coming back, which included a win against the World Champion.

It was MvG who started the stronger and lead at the first break. Joe fought his way back into the game we saw two ton plus checkouts from him including a very impressive 149 which gave him the lead at the interval. MvG was determined to make sure it was only by two legs and hit a 107 to make sure of it.