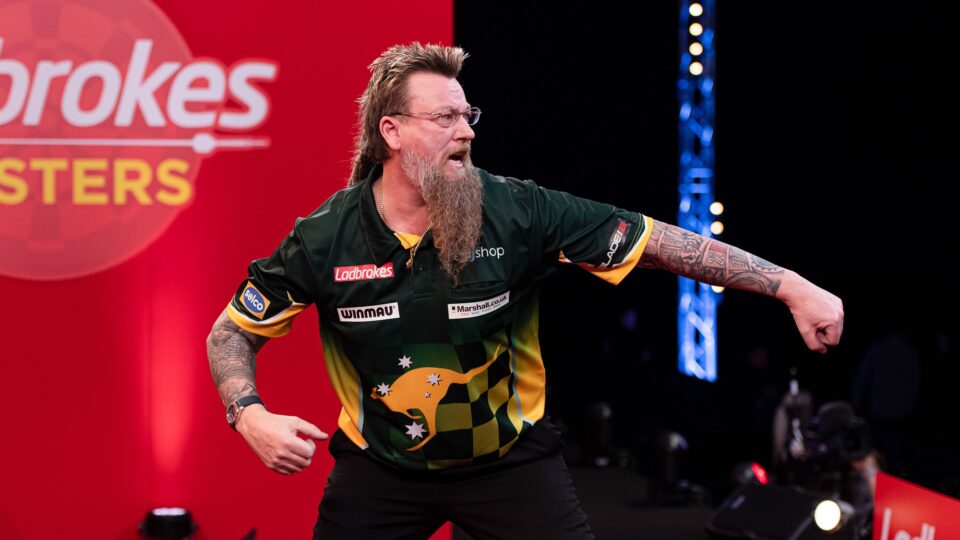 World Champion out on Night Two of Masters.

Simon Whitlock booked his place in the last eight of Masters with 10-8 over the newly crowned World Champion.

Special One into Finals day

It was a slow start from both players with Cross taking the first two legs before Jose responded with two of his own. Rob Cross found a bit of magic to go into the break with a lead, firing in a 180 before a 69 checkout.

It was Cross magic again which saw him take out 146, but this was in between some inconsistent darts from Voltage. This included Cross taking out double eight in the last leg however, Cross didn’t check his score correctly and actually only needed eight. Jose punished to go into the final break all square.

This seemed to have an impact on Rob Cross after the final break and The Special One went up another gear winning five of the last seven legs. The Special One saved some crowd pleasing checkouts for his last two legs with a 101 before a 122 to win the game and book his place in the last eight.

The Rockstar came flying out the blocks to win the opening up a two leg lead, before Gary got his only leg on the board with a tops finish.

After the break Joe Cullen found another gear and in leg eight took out a fantastic 167 finish. The big finishes were here to say for Joe as he followed it up with a 142. This was all before we saw a very special 115. Joe hit bull with his first dart before a single 15, and with his first dart sat up perfectly he fired another bull to the delight of the crowd.

Bully continued his form in Milton Keynes and that showed from the first session with Bully Boy hitting a few 180’s and taking a 4-1 lead into the first break.

The Polish Eagle fought back in the second session and looked favourite to level things up after winning three of the first four legs including two breaks, but was unable to capitalise and Smith stepped in to lead 6-4.

Smith wanted this game over with and reeled off three straight legs before finding seven perfect darts. Ratajski had other ideas and found a 12 dart hold before a 104 checkout to close the gap.

Bully Boy made sure in the next leg and secured victory with a 12 checkout and finished the game on a 105.49 average.

A mid game surge from Dave Chisnall was enough to see him defeat James Wade 10-4.

We saw six holds of throw before the first break. It was Dave Chisnall who got it with an unconventional 90 checkout which included a 5, treble 15 before taking out tops.

This was the beginning of the surge from Chizzy who went on to win every leg in the second session for a 7-3 going into the interval.

Chizzy won the next two and it looked like he was going to make it eight legs on the spin, until Wade was able to find a couple of legs to make the scoreline more respectable.

We had fireworks from the off in the evening session, with Dimi firing in the big fish in just the second leg. Jonny Clayton was able to hold his throw which gave him the advantage going into the first break with a 101 checkout.

The second session continued with the same standard with some fantastic scoring from both players, and with both players continuing to hold we were all square at the halfway stage.

The first break in the game finally came in leg 12 and it was Jonny Clayton who took the lead and won four out the next five legs to move one away. Dimitri didn’t give up without a fight and reeled off three legs of his own to take us to a decider.

After missing a match dart in leg 17, Clayton didn’t make the same mistake and in the decider took out 88 to win the game. The route of going the 16’s will raise a lot of questions, but Clayton won’t mind as he progresses to the last eight.

Price wins to set up an all Welsh Quarter Final

Gerwyn Price guarantees a Welsh player will be in the Semi Finals as he defeats Ryan Searle 10-8.

Gerwyn Price controlled from the off and lead early on 4-1, winning the fifth leg with a 164.

After the break Ryan Searle reeled off the first two legs before Price won two of the next three to hold onto the lead.

We saw glimpses of what the World Number One can do as he was always control against Heavy Metal. This continued as Gerwyn Price wrapped up the win and set up the all Welsh clash in the Quarter Finals.

Called onto the stage as the Two Time World Champion, showed why he is exactly early on averaging 102 and leading 3-2 going into the first break.

That was as good as it got for Wright with some new darts, as Whitlock stepped up his game and fired in four of the next five legs, to take the advantage.

Peter was able to hold throw in the first leg back, but once more The Wizard found a way to get the better of Peter and moved just one away after reeling off three straight legs.

The drama wasn’t quite over then as Peter Wright won three legs of his own to make the score 9-7. Whitlock then had his first match darts at double 8, with two in hand he went outside before busting the score of 76 going in the wrong bed, before Wright punished. Whitlock made sure the next leg and sets up a Quarter Final tie with Jose de Sousa.

The final game of Round Two saw Michael van Gerwen complete the Quarter Final line up with a 10-9 win over Luke Humphries.

Cool Hand started the better and that certainly showed with a 108 checkout in leg one to get an early break. The next four legs went with throw and it was Luke with the advantage at the break.

Just like the first session we saw an early break, this time coming from MvG. Just like session one it was followed by four holds of throw and ended with an MvG roar when he levelled the scores.

With all breaks out the way, the game continued to swing both ways, with MvG winning the first the first two legs before Humphries made it four on the spin to move one leg away.

Cool Hand was unable to secure the win and it was MvG who took the final place in the last eight and set up a meeting with Joe Cullen.