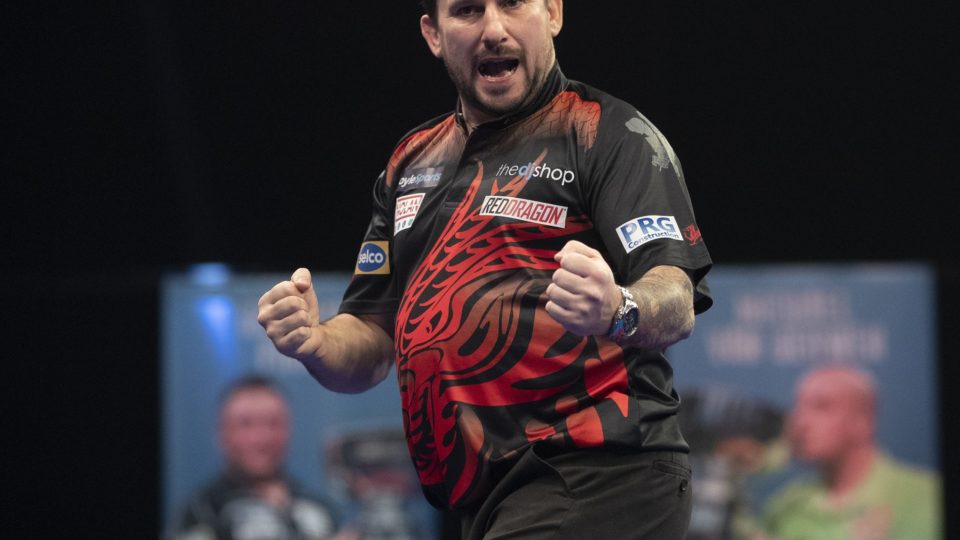 On the night where Dimitri van den Bergh joined Michael van Gerwen at the top of the 2021 Premier League Darts table, Jonny Clayton stole show with a magical 9 dart leg on his way to victory over Jose de Sousa to round off the night.

Nine Dart Clayton sees off the Special One

In a high quality encounter, Jose’s counting aside, the Ferret produced a final three legs of the very highest quality. It took him just 32 darts to go from 4-3 to 7-3 as he followed the perfect nine, with legs of 11 and 12 darts and dash over the finishing line.

In a game where he averaged 108.48, Jose’s performance was once again overshadowed by his counting. In leg five, needing 70 to lead 3-2, the Portuguese hit treble 18 before going for D12 rather than D8. He went inside the target and did the same on D6, busting his score.

After his mistake, he was then unable to take the 70 out next visit, from where Clayton broke his throw for a lead he never relinquished.

Whether it would have mattered, after the barrage that Jonny Clayton produced at the end of the match, who knows? But at this level you can’t afford to throw away legs with such amateur mistakes.

Let’s give the Ferret the praise he deserves though. It was another wonderful performance from the form player of the year so far. He is now just one leg behind Michael van Gerwen and Dimitri van den Bergh atop the table.

The effervescent Belgian was a little subdued in his post game interview after completing the whitewash victory over Glen Durrant. It was clear to see he didn’t enjoy the manner of the victory over someone who is clearly struggling.

He referenced last night’s post match interview, in which he stated he would “never underestimate the man”. He admitted he simply tried to “do his job”.

It was a solid performance from Dimi, who checked out on the bull twice. The second of which concluded a magnificent 129 finish.

Duzza is now in real danger, as the defending champion props up the Premier League Darts table after three straight losses.

van Gerwen back on song in Premier League

After the first two legs were shared in 15 darts apiece, MvG broke in leg three. From there kept a much improved Rob Cross at arms length before taking the final 3 legs in a combined 41 darts.

The five-time Premier League champion even teased wrapping up the match with a nine darter, hitting back to back 180s before drifting into the single one on dart seven. It didn’t delay proceedings for long. His next visit saw him take out 100 in three darts for the match.

Peter Wright bounces back with victory over Anderson

In his search for a return to the form he showed on night one, Snakebite returned to his World Championship winning darts. He later stated that he felt he needed to “straighten up his throw”, hence the change in equipment for the third night in a row.

It begs the much asked question, why doesn’t he just stick with them?

They certainly did the trick, as Wright averaged just over 100. Throwing first he raced into a 3-0 lead, breaking the Anderson throw in leg two.

The highlight of the match game in leg five, where Wright cleaned up 302 in six darts. Hitting three treble 18s before checking out 140.

At 6-4, Anderson missed two darts at tops to break throw and have the opportunity to throw for a draw. He was duly punished as Wright clinically took out 87 in two darts to wrap up a 7-4 win.

James Wade was once again out of sorts and is looking in a bit of trouble down the bottom of the table, with the late replacement sitting on 1 point from a possible 6.

It was a much improved performance from Nathan Aspinall, who took a 5-1 lead without really giving the Machine a look in.

That included seven perfect darts in the opening leg, missing the treble 19 for a shot at Double 12. He wrapped the leg up in 11 darts and set the tone for the match.

He was comfortably ahead throughout and when Wade couldn’t take out 121, the Asp took out 76 to close out a 7-4 victory.

So we're guaranteed a new winner of the #PremierLeagueDarts. The question is who will join Jonny Clayton in the final?

Jose De Sousa beat Nathan Aspinall yesterday. Will he do it again, or will The Asp get the win when it really maters?

The Ferret wins 1️⃣0️⃣- 8️⃣ and guarantees we will have a new name on the trophy!

What a story for The Ferret! #Darts

However, he faces Jonny Clayton, a man who's won three games in four against him in 2021.

This lot are ready to have a party this Bank Holiday Friday!