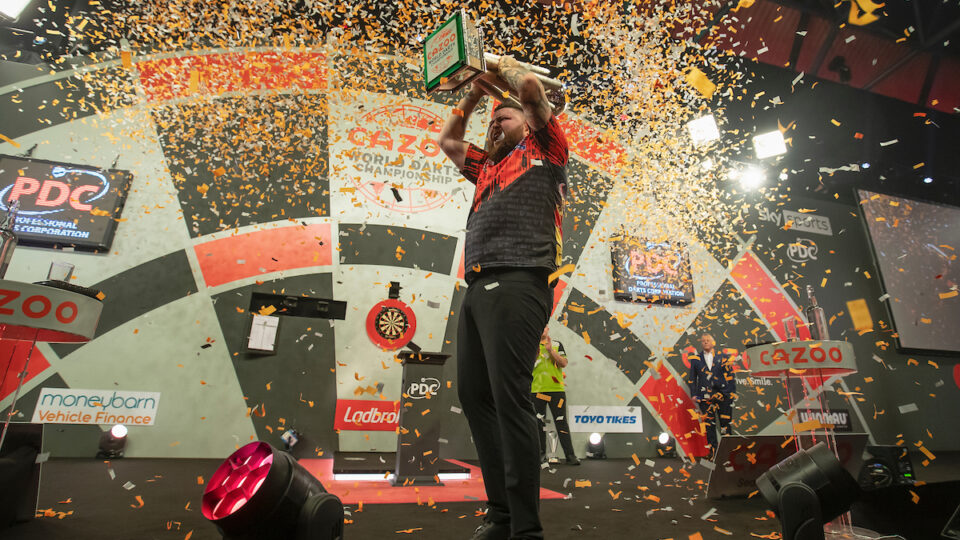 Michael Smith realised the dream of anyone who’s ever picked up a dart and finally become the winner of the PDC World Darts Championship.

In his third appearance in the sport’s greatest match, he defeated Michael van Gerwen 7-4 in revenge for the 2019 final which The Green Machine won. He also hit an incredible nine dart finish in the second set, becoming the second player to hit a nine darter in the World Final after Adrian Lewis in 2011.

It now leaves Van Gerwen 3-3 in World Darts Championship finals, while it means Smith for the first time in his career is the world number one.

The first set saw Bully Boy go ahead, before three legs on the bounce gave MvG the opening set. Both then held to the start the second set, before the two produced arguably the greatest leg ever played in the history of the sport.

Both hit six perfect darts, before The Green Machine missed double 12 for the nine. On 141 and to break throw, Smith found treble 20, treble 19 and double 12 to find the magical nine darter, and the 3500 crowd inside Alexandra Palace erupted.

Smith held to level the match and won the first two legs of the third. Despite Mighty Mike breaking in the third leg, the Grand Slam champion pinged double 10 to go 2-1 in front.

Van Gerwen hit back though, winning the fourth set in 46 darts with an 83 outshot. Both held twice in the fifth to set up the deciding leg, where a 14 dart break gave The Green Machine a 3-2 lead.

Both then broke to start the sixth, but MvG then missed two clear darts at double ten to go 2-1 in front. The Bully Boy went round the houses on 40, but last dart in hand hit double five to break once more. A hold on double ten then levelled up an absorbing contest at 3-3.

MvG went 2-0 up in the seventh set but missed two darts for it in leg three. A hold, followed by a magical 130 outshot levelled the set for Smith, before he eventually found double six to go into the lead for the first time since set three.

The Bully Boy broke at the start of the eighth with a 13 darter on tops. Two holds later, he moved two sets clear, before whitewashing The Green Machine in 47 darts to claim the ninth, as MvG did not get a look at a double.

The tenth set went to a deciding leg, but van Gerwen found double 16 to extend the match at 6-4. The Green Machine then won the opening two legs of the 11th, but a 106 checkout to hold from Smith got him back into the set.

The fourth leg saw MvG miss the bull for a 132 and the set, as Smith hit double seven with his last dart to hand to throw for the title. He then threatened another nine darter, before missing the seventh treble 20, but hit double eight for an 11 darter to realise his dream.