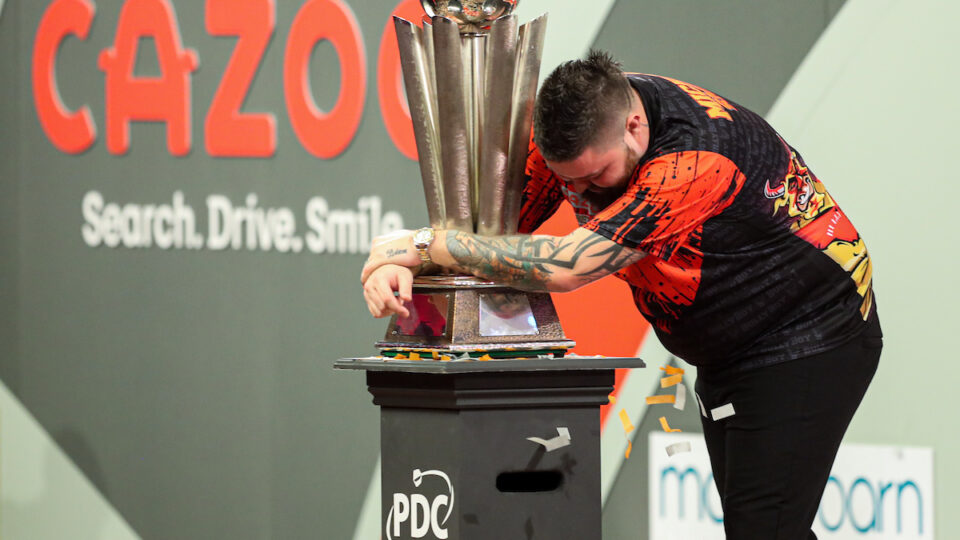 Michael Smith reminded all the doubters “that bottlejob is now world number one,” after winning the PDC World Darts Championship yesterday.

The Bully Boy beat Michael van Gerwen 7-4 in an epic final, which saw arguably the greatest leg of darts ever played in the second set. MvG missed double 12 for a nine dart finish, which Bully Boy then hit in the same leg.

Smith sat down with Online Darts after his victory at Alexandra Palace, and revealed the lack of sleep he had, as well as his hopes for the 2023 season that sees him start at the top of world rankings.

“I literally just stared at [the trophy] for seven hours”

After coming runner up in two previous appearances in the PDC World Darts Championship Final, Smith spoke about what he did in the hours after capturing the sport’s ultimate prize.

“As soon as I got to bed last night, I opened the cabinet with the trophy. I literally stared at it for about seven hours until I started doing the interviews now. I woke up at 9am yesterday morning, so I’m just running on fumes now!”

The Bully Boy also explained though that despite achieving his life’s dream, he knows there’s work to do to keep his place at the top of the tree.

“When I won the Grand Slam, I lost the game after to Richie Edhouse. I’m not invincible, but I’m in a good place. I’m finally winning now, I know that instead of winning Pro Tours and Europeans, I’m starting to win the big ones now, and there’s nothing bigger.”

Smith looks forward to being introduced as World Darts Champion

Looking back on the game itself, Smith picked the nine dart finish as the moment he knew he was in the final.

“When he missed a double and I went out, I think he knew then he was in for a good game. Then there was one leg that he hit a 180 and gave it large, and I hit the 130 checkout, and that’s when I think I believed it as well.”

When asked about being world number one, Smith put that down to the consistency he’s shown over the years, despite his “bottlejob” tag by some on social media.

“I think that’s the first time I’ll cry,” continued The Bully Boy when asked about how it will feel to be announced with his new titles in the Bahrain Darts Masters next week. “I think that’s when it will hit me that I’m the World Champion. Hopefully I don’t because I’ll look like a baby on stage!

“I’m looking forward to this year. I’ve given myself a massive opportunity to do great things which I know I can.”

You can view our full interview with the World Darts Champion Michael Smith on this page.