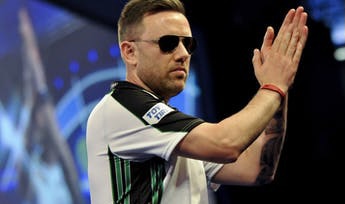 Paul Nicholson on BDO Debacle, “I was absolutely red!”

Paul Nicholson joined the Online Darts Live Lounge on Monday evening and the 2010 Players Championships Finals winner gave his insight into Friday evening’s revelations of BDO Chairman/ex Chairman (who knows?) Des Jacklin. His displeasure, to put it mildly, was clear.

“The fact of the matter is, if I’d have been speaking to you right now, in direct correlation to that tweet coming out, what I would say now would have been very different and very blue for that matter.

“I was sitting up reading that thing on social media and I was absolutely red! I just couldn’t believe what I was reading.”

Well, Paul, you certainly weren’t the only one. He went on to talk about his first hand insight as to the decline of the once prestigious organisation.

“My position as someone who covered the last 3 Lakesides and of course the indigo, and the world masters, at Purfleet. I had an insight into as to what was going on.

“So, I could see that things were falling apart. I was waiting for the last level to just go to the floor. It was like a house of cards.

“I didn’t see anything in the building, at any event I went to, to tell me otherwise. It was quite simple. You could see that the foundations of the organisation (were) crumbling and that players were moving.

“As soon as they lost Glen Durrant, you just got the feeling that maybe that was the tipping point.”

So, where did it all go wrong? Who was to blame? Paul, from his position on the inside in a role he was employed in by Des Jacklin, could see it clearly.

As ever, with The Asset, there wasn’t much need for anyone to ask the questions.

“The fact of the matter is, the British Darts Organisation has been going downhill for quite some time but it still held a cache with the audience in January, people expected to watch Lakeside darts.

“Now, I know that Des Jacklin is not 100% to blame for everything that has gone on, there were some faults before it. However, the crux of the matter is this, he has got no skills and has got a great deal of ineptitude about fixing the BDO. It is finished, it is over. And to cling on to it is wrong. Let it go.”

Who owns the trophies?

Friday nights revelations, that the trophy had been collected from Wayne Warren and was back in Gainsborough at the Jacklin residence brought not only shock and anger within the darts community, but also for Paul and many others, more questions.

“And this is where the huge argument comes from, there are different arms of the BDO, there’s a commercial division which has gone bust this week. I’ve seen the actual documents of the commercial arm of the BDO going into liquidation.

“There are still sides of the BDO are still alive. The biggest question is this, in relation to what we’ve seen in the papers. Which part of the BDO owns the trophies?

“If, the commercial arm of the BDO owns those trophies, why has Des got the trophy?!

“So, there are questions they to be answered but what I want to know is, who do those trophies belong to and where are they going now?

“I really do believe that maybe this trophy does belong to Bob Potter. It belongs at lakeside. It belongs on Bob Potter’s mantelpiece, because he’s the one who commissioned it, we think.

“I want to see the proof of this. This is where my heart of hearts is right now, I want to know who this trophy belongs to and the same for the other ones as well. That Gold Cup for instance is one of the most impressive trophies in sport and it needs to be in the right place.”

The war is not over

There was no hiding his feelings on the matter. Even as he remained professional and calm, you could feel it bubbling under the surface as he almost issued a rallying cry to the darts community.

“What it looks like is that he has had a vendetta against Wayne Warren to get this trophy back and he has won this mini-battle. But the war is not over. Darts fans are very vocal and when it comes to the BDO it’s a very very vocal society.

“We won’t rest until we find the rightful owner of that trophy and it’s in the right hands. Now if for whatever reason, he’s got some legal paperwork to say that he owns that trophy then we’ll to drop our keyboards.

“But the fact of the matter is, I think we all know that it doesn’t belong to him, and he does play darts and its the only way he was going to his hands on it, because he was never going to win a world title.”

So, where does this leave things? What’s does the future hold? That’s what we are all thinking, and Paul echoed the sentiments of most.

“He says the BDO is still alive, well Modern Amateur Darts (MAD) is very alive, I know this. The PDC is getting ready for another great season, and the WDF are doing some great stuff. Where’s the BDO in all this? They’re dead! Let it go, just let it go.”