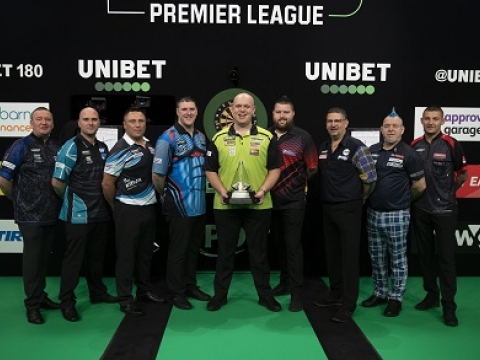 PDC Premier League Schedule and How To Watch Night 1, all the information you need is below for the best night of darts.

The PDC Premier League returns after five long months away. Want to know the schedule and how to watch the Premier League? Below has all the information that you need for the action over the next ten nights.

The last Premier League action we saw was way back in March in Liverpool. So if you are struggling to remember that far back, Glen Durrant is currently sitting top of the table, with Daryl Gurney bottom of the pile.

The live streams are of the highest quality and can be watched for free on Bet365, as long as you have money in your account. During the stream, you will be provided with some of the best live stats about the game. This is whats sets watching live stream darts apart from the rest, as you get the stats before anyone else as they are on your screen with the game.

Tonight’s action gets underway at 6.30 pm with the first game live at 6.45 pm. The first match on sees Michael Smith taking on Gary Anderson. Smith knows with a good run of form that he can be involved in the scrap for the top spot.

Second game is the world number one Michael van Gerwen against Rob Cross. MvG is looking to hunt down Glen Durrant at the top of the table, where Cross will be looking to spark his year. The former champion of the world has been out of sorts so far this year.

Match three is a tough game to call on paper. Nathan Aspinall and Gerwen Price go head to head. Both crashed out in the first round of the World Matchplay; both will be looking for a result here. The smart money could be on the draw in this one.

Fourth match of the evening is the contender’s match. Chris Dobey should have been playing in front of a home crowd in Newcastle, but will now do battle with Daryl Gurney in very different circumstances here in Milton Keynes. Gurney knows it could take three wins and bit of luck for him to avoid relegation on Judgement Night.

In the last game of the evening, we see world champion Peter Wright and Glen Durrant go head to head in a repeat of tier Matchplay game. Durrant will know by the time he plays if he’s still top of the league, could the extra pressure tell? Wright will need to find more consistency than he showed in the first half of the Premier League. But Wright is more than compatible of going on a huge run here in Milton Keynes.