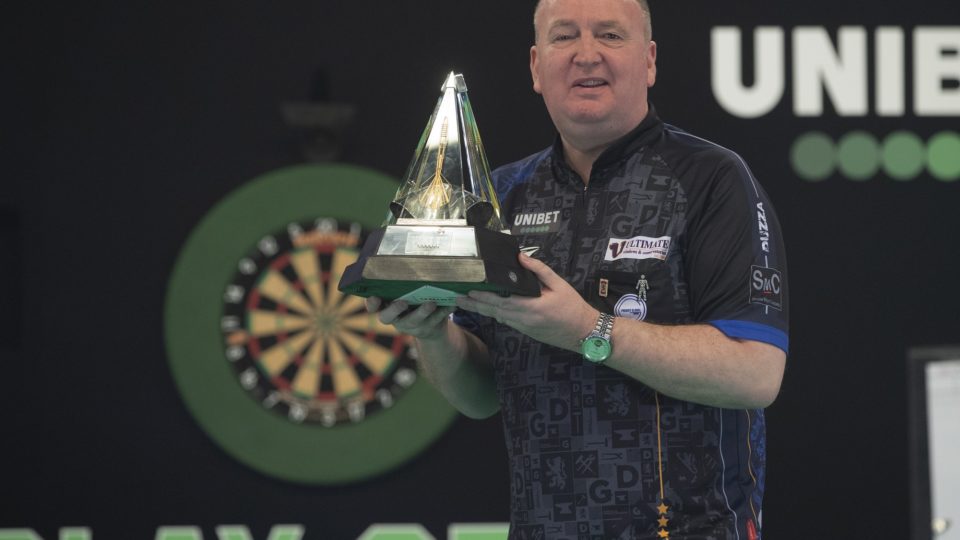 Next in our preview, we look at the defending champion, Glen Durrant…

The warrior like spirit he showed last year helped him to finish top of the league, becoming just the third player to do so.

He then rocked up to the Ricoh Arena, beat Gary Anderson and Nathan Aspinall, and lifted his first PDC TV title.

It was a moment of validation for Duzza. The man who some said wouldn’t make it in the organisation after coming over from the BDO in 2019 as a three time World Champion, had become just the sixth player to ever win the tournament.

Since then though, a combination of illness and a lack of form, have seen the man from Middlesbrough lose his mojo. Now, he must find it again.

As a first two years, it could not have gone much better for Durrant, with the possible exception of winning the PDC World Championship.

Two Pro Tour wins in his first five months as a Tour Card holder. Semi finals at the World Matchplay, World Grand Prix, and Grand Slam all in 2019. A quarter final at the Worlds.

All this led to his rightful selection in the Premier League Darts for 2020, in which he performed magnificently. Top for 13 of the 16 events. Not relinquishing top spot from event eight. Many times on the brink of defeat, only to find a way to secure a point.

It was one of the grittiest and toughest performances ever seen in the league, particularly playing night after night when it resumed behind closed doors. He then survived four match darts in the semi final against Anderson, before eventually wearing Aspinall down to take home the trophy.

The scenes that evening in Coventry will be remembered by many for a long time. For Durrant, it was the realisation of another step of his dream. Sadly for him, the dream has turned into a bit of nightmare recently.

Jack “Gobby” Garwood gives his prediction on what we’ll see from Glen Durrant in this year’s Premier League, and where he will finish:

In his relatively short PDC career, Glen Durrant has earned every single accolade that has been attributed to him. Determined. Resilient. Dogged. Clinical. Composed.

He has fought for every single point scored, double hit and match won. Even the day he won his tour card was a battle.

And a battle is exactly what the defending champ finds himself in. Much has been made about his health issues last year, but to me the signs are worse. The belief has gone, the action has lost its fluidity, and the composure has been replaced with desperation.

Duzza is a worthy champion, but unless he finds something on the practice board in the next fortnight, we’ll be crowing a new champion in a few weeks time.

“The Premier League will set the tone for his 2021”

Duzza tested positive for coronavirus shortly after his Premier League win. He’s said himself it’s the worst illness he’s ever faced, and he’s struggled since then to play the darts we saw for the majority of his first two years.

He’s not made the quarter finals of any TV event since the Premier League. In fact, he’s won just two games in front of the big cameras, both of them at the World Championship. Durrant has played okay on the Pro Tour so far in 2021, but there is still too much inconsistency from him.

As defending champion, Glen Durrant has the most to prove in this year’s Premier League. From being the hunter, he’s now the hunted. It’s rare that the defending champion has the second highest odds to win the event, but given the way his form has dipped, it’s hardly a surprise. But this is more than just an event for Duzza. The Premier League will set the tone for his 2021.

Either, he regains some form, which will give him confidence ahead of defending three semi finals on his ranking.

Or he continues this downward spiral, giving himself more problems as he begins to defend money and tries to keep his place in the PDC elite.

The stakes do not get much higher.