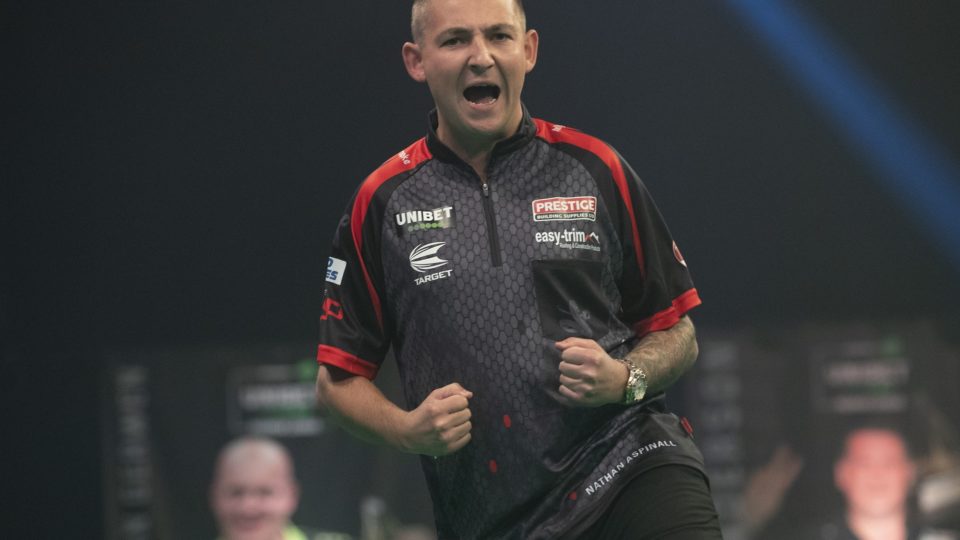 Next in our preview, we look at last year’s beaten finalist, Nathan Aspinall…

Let’s cast our minds back to Wednesday 5 September 2018.

On that day, a young man called Nathan Aspinall walked into the Barnsley Metrodome, having lost to Ryan Searle in the first round of a Players Championship event the previous day. He barely had enough money to make the event, but put all of that behind him to beat Searle in the final to win his first ever PDC ranking title.

If you had told Aspinall straight after that two and a half years later, he’d be competing in his second straight Premier League, he’d have probably laughed at you.

However, his grit, determination and heart have seen him rise towards the top of the sport over the last two years. This year though, the Premier League is massive for him.

Selected as a Premier League contender for 2019, he made sure he’d be in the main league in 2020, winning the UK Open in March (with a 170 checkout no less) to secure his first ever PDC televised title. The scenes of his Grandad celebrating with him at Butlin’s will live long in the memory.

He also won the US Darts Masters in Las Vegas that year, before reaching a second straight World Darts Championship last four.

It was easily the Stockport man’s best year as a professional, and on debut in the Premier League in 2020, he made it all the way to the final before losing out to Glen Durrant.

However, the rest of his 2020, was somewhat disappointing.

Jack “Gobby” Garwood gives his prediction on what we’ll see from Nathan Aspinall in this year’s Premier League, and where he will finish:

Capable of popping up when you least expect him, Nathan Aspinall did exactly that last year on his way to the final. The Asp adopted his never say die attitude in the face of some of the biggest names in the game, went toe to toe, and came out swinging the other side.

The worry this year, is the spark has gone. A change of equipment at the start of the year tells me Aspinall is searching for something.

Perhaps a return to the underdog status he seemingly prefers will spark him in to life once again, but without that, it will be a tough few weeks for Aspinall

“Can The Asp go one step further?”

Since the 2020 World Championship, The Asp has failed to make a ranking TV semi final. In fact, he’s got to the quarter finals of one event since then, the Grand Slam.

He did win the PDC Home Tour, celebrating by scribbling his name on a dinner plate, and took home two Players Championship titles on the floor. But, after an excellent 2019, he will look back on last year knowing he could have played better.

Aspinall wears his heart on his sleeve. You know what he’s thinking and feeling every time he steps on stage. He also cannot wait for fans to return to events, having said in previous interviews how much he misses them.

But more significantly than that, is how he will be thought of going into the tournament. After not performing in recent events, Nathan Aspinall is once again an underdog, a position he thrives in. After all, no one expected him to make the semi finals of the Worlds, and go win the UK Open, six months after winning his first ever PDC title.

When he is not expected to do much, he proves why he’s one of the best players in the world.

Would Aspinall have been in the field this year had he not made the final last year? More than likely not.

But can The Asp go one step further than 2020 and win the Premier League? If he does, the underdog tag will be retired, and he’d join the darting elite once and for all.