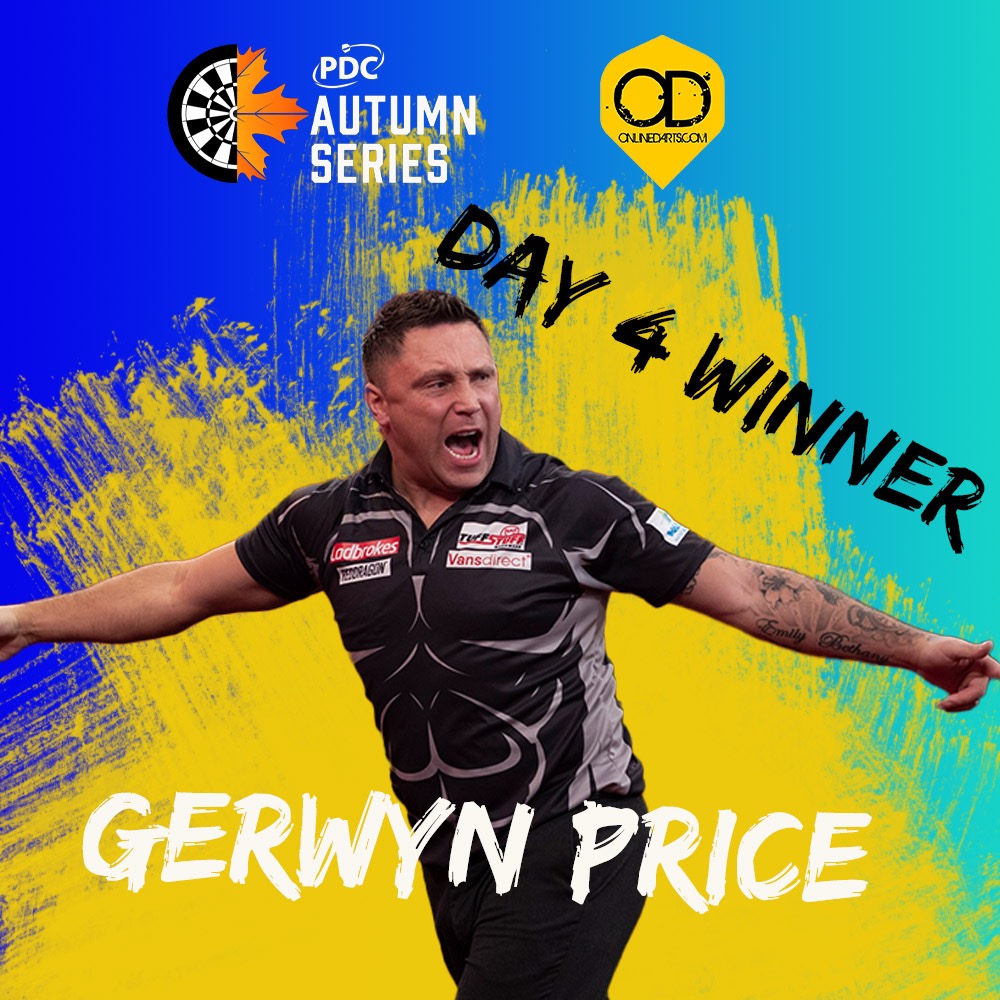 Down 7-4 to Devon Petersen, The Iceman took advantage of The African Warrior missing chances to win what would have been his first ever PDC ranking event. Instead, Price came out the winner 8-7 to take his 12th PDC title home.

It rounded off a dramatic day four of the Autumn Series, which saw:

The Iceman said after his win that it was a strange day for him. Normally when he wins titles, he hits excellent averages and loads of 180s. Today though, he flew under the radar until the last 16, when he produced some excellent quality.

Price started the day with a 6-1 win over Nick Kenny, before beating Martin Schindler and the winner of day two Damon Heta 6-4 to win his board. His highest average was 95.7, which meant he was not one many people were looking at to win the title today heading into the last 16.

That all changed with a 6-0 demolition of Ryan Murray in the last 16, as The Iceman hit a 104.9 average. Next up was a gritty 6-4 quarter final win over Mensur Suljovic, before producing another astonishing display against Ryan Searle. With the score at 2-2, Price reeled off five straight legs to win 7-2 and make his first final of the week, averaging 105.8.

That set up a final against Petersen, and Price struggled to keep up The African Warrior’s scoring for the first 10 legs of the contest. Petersen averaged around 105 for most of the match, winning every one of his legs in 16 darts or less to go 7-4 up and within a leg of his first ever PDC title. Price stayed with him though, hitting a 68 to take the match to 7-5.

The turning point came in the 13th and 14th legs. After Petersen missws a shot at double 16, Price hit a lovely 78 checkout to break the throw for the first time and trail 7-6. Then, in the 14th leg, Petersen hit a lovely 136 to set up three at double top for the match. After Price could not hit on the bullseye, Petersen missed all three at tops to end the contest. Price then found double eight to level the game up and take it to a sudden death leg.

The Iceman then found the scoring power, and Petersen couldn’t find the treble. Price hit a 180 followed by a 128, and took out the 40 remaining points he needed to break the throw once again and win the match 8-7. It was the only time he led in the contest.

So near and yet so far for Petersen

Devon Petersen has been threatening to make finals throughout the year, and made a semi final earlier in the week too. However, he will be kicking himself tonight after not being able to get the job done when he arguably played the best out of anyone.

He started the day with a 6-2 victory over Robert Thornton in round 1, before grinding out a 6-5 victory over Joe Murnan in round 2. That set up a board final against the world number one, and yesterday’s winner, Michael van Gerwen. Petersen played magnificently, and beat him 6-0 with a 101.3 average, becoming the first player to whitewash van Gerwen since Peter Wright did so in the European Darts Grand Prix final in 2017.

That seemed to set The African Warrior up for the rest of the day. He beat Jermaine Wattimena 6-3 in the last 16 with a 99.5 average, before producing his best performance of the day in the quarter finals, winning 6-2 against Nathan Aspinall with an average of 110.

He then won 7-2 against close friend Joe Cullen in the semi final, becoming the first African player ever to reach a PDC final. Petersen then produced some stunning stuff against Price, but couldn’t find the all important match dart to get over the line and win his first ever PDC title.

However, it’s not all bad news for Petersen, as he run today all but secures him a place at the World Grand Prix in Coventry next month.

Good runs from Joe Cullen and Ryan Searle to the semi finals also all but secured their places at the Grand Prix too. Cullen produced the second highest average of the day, a 112.2, in a magical 6-4 quarter final win against Peter Wright, who averaged 106.1 in the process, in a game of the Autumn Series contender.

The highest average of the day went to Jonny Clayton. The Ferret produced a 112.5 in a 6-1 round 1 win against Jeff Smith. Clayton’s run to the last 16 helped him into World Grand Prix qualifying contention, as did a quarter final run for Ross Smith. Smith is now £1,250 away from potentially qualifying.

However, first round losses for:

See them slip further down the qualification spots. They will need solid days tomorrow to ensure they cannot be caught in the Euro Tour event next weekend and to qualify for Coventry.

Finally, congratulations to James Wade. He hit a nine darter in his first round victory over Robert Collins, before losing to Derk Telenkes 6-4 in the last 16.

How can I follow the final day of the Autumn Series?

We’ll have the final day of the Autumn Series, covered at Online Darts.

There will be a live blog from 10.45am giving you results and ranking changes as they happen.