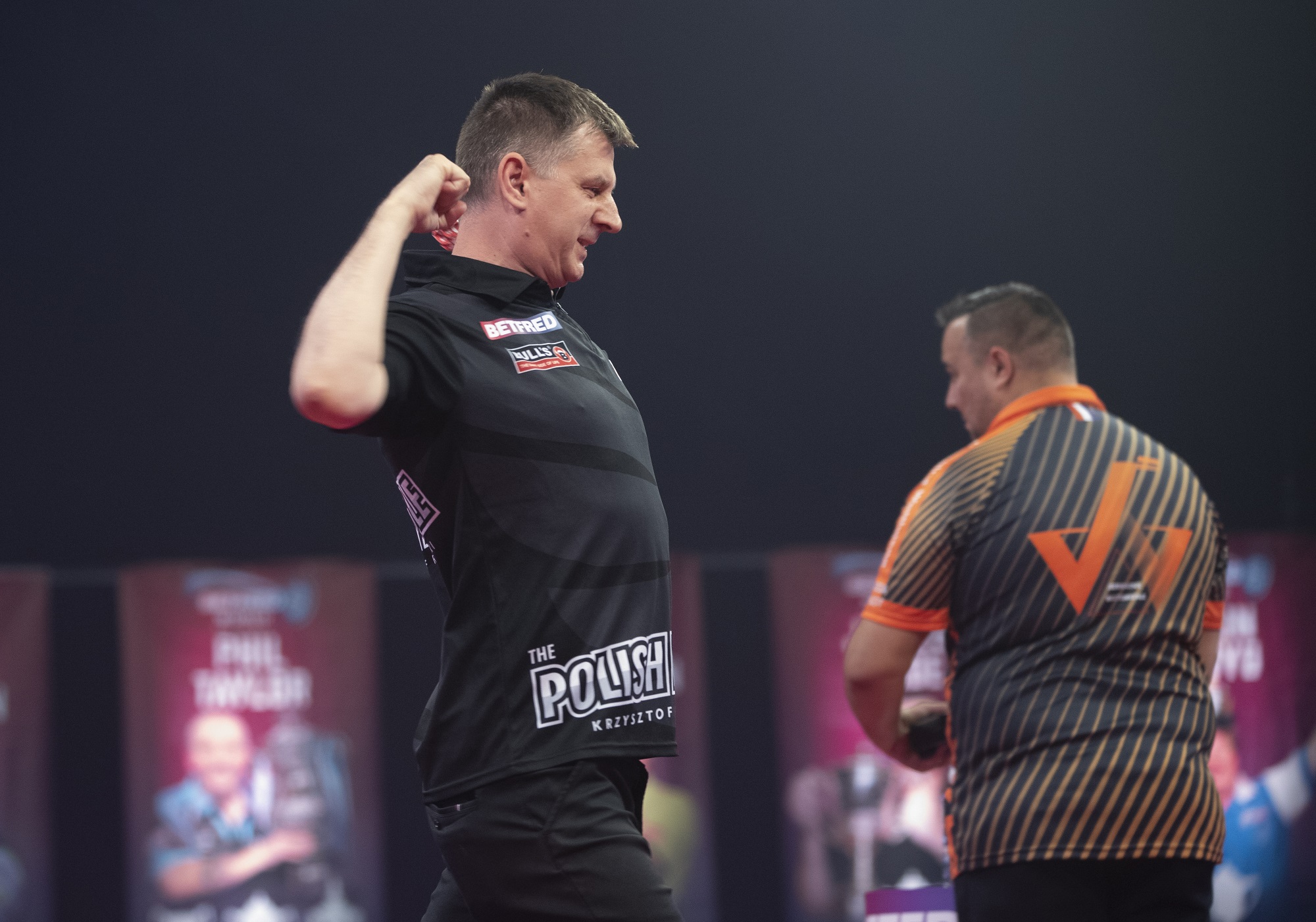 Krzysztof Ratajski has knocked Fallon Sherrock out of the World Series of Darts Finals.

Ratajski played the role of the spoiler in Amsterdam as the number two seed was beaten in round two.

The 6th and 7th seeds, Peter Wright and Gary Anderson respectively, were also defeated in the second round.
Madars Razma joined the trio of other seeds to lose this evening after he slipped to defeat against Mervyn King.

After reaching the final of the Nordic Darts masters, Fallon Sherrock entered the World Series of Darts Finals as the number two seed.
The Queen of the Palace continued where she left off on a PDC Stage, pushing Michael van Gerwen all the way for the title.

However she was unable to reproduce that form this evening, falling to a clinical Krzysztof Ratajski 6-1.
The Polish super star allowed Sherrock just 4 attempts at a double all evening as he ran out a comfortable victor, in front of a rather muted crowd in this game. Such was the Pole’s domination.
Ratajski fired in 3 180’s and hit 6 out 11 attempts at the outer ring to set up a meeting with Niels Zonneveld.

Both players continue to show a worrying decline in form, more severely Peter Wright, who was so good in winning the World Matchplay earlier this year.
Anderson widely admits he has other priorities in life over darts, but there is still a hope that he re-discovers the fire and natural ability that see’s him lift yet more major silverware.

For Zonneveld, the win represents one of his best on TV in his young career. The young Dutchman was an excellent 50% on the doubles has he piled in 3 ton plus checkouts. That included a back to back 120 checkout, followed by a 102 for the match. All of that equated to a 97 average, with Gary slightly below on 93.8

It is Snakebites downturn in form that will be the most worrying for fans of the pair. After falling early in all 4 Pro Tour events last week, Wright continued his slump against a Kim Huybrechts on the ascent. Wright managed just a 91 match average against the Belgian, who comfortably lead from start to finish. The Hurricane running out a 6-1 victor, with a 150 finish to win the match the icing on the cake.

The King of the World Series?

Mervyn King is on a rampage at the World Series of Darts.

It is difficult to comprehend this is Mervyn Kings first ever World Series of Darts appearance. The Englishman has been among the upper echelons of the PDC for such a period you could be forgiven for thinking he previously been invited. However, he is making up for plenty of lost time, cruising in to the Quarter-Finals in Amsterdam with yet another convincing win.
This time, Madars Razma was the unfortunate victim, as he followed in James Wade’s footsteps, failing to register a leg on the board.
The Latvian did manage 3 darts at a double. 3 more than The Machine yesterday. But he was unsuccessful with all 3 attempts and Merv ran out the victor.

Next up for King, Michael van Gerwen.

Michael van Gerwen delighted a home Amsterdam crowd by beating Maik Kuivenhoven 6-4. The Green Machine held throw up to the interval to lead 3-2. On returning from the ad-break he won back to back legs to take an imperious 5-2 lead.
Kuivenhoven fought back to 5-4 and missed 6 darts to level the match and force a decider. That gifted MvG the 10th, and final leg and he moves on.

Reigning Champion Gerwyn Price, and fellow Welshman Jonny Clayton both stormed through to Sunday’s action. The pair both missed the last block of Super Series action, so entered this event with question marks over their form. Those questions were swiftly answered as Dutch pair Dirk van Duijvenbode and Vincent van der Voort were beaten 6-2 and 6-1 respectively.
The reward for their wins? A clash with each other in the last 8.

Dancing Dimitri van den Bergh is the final player in the quarter-finals. The Belgian ace threw a night high 101.21 average as he defeated Jose de Sousa 6-3. Van den Bergh returned to form last week on the Pro Tour, picking up a title. He looks to be peaking at the right time this year as we head for the busy back end of 2021.