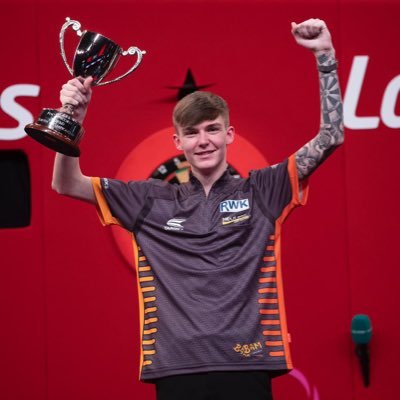 Bradley Brooks defeated Keelan Kay in the last event to finish top of the UK Order of Merit, which secures him a spot at PDC World Championship and a Tour Card.

Nathan Rafferty won event number 11 and finishes second for the year after not being able to push on in Event 12.

Bradley Brooks beat Keelan Kay in a winner takes all final. The players were playing for a place at the  PDC World Championship, a two year Tour Card and a place at Grand Slam of Darts (Brooks already qualified).

Bradley Brooks eased into this event with convincing wins over Bradley Coltamn 4-1 and Peter Allen 4-0, before surviving ten match darts, to get the better of Ryhs Griffin 4-3.

The last leg deciders didn’t stop there for Bradley, who beat Keane Barry 4-3 before getting the better of Dom Taylor 5-4. Dom Taylor finished the event 4th on the Order of Merit and was one of a number of players who could of finished top if they would have won this event.

Semi-Finals in Event 12 saw Bradley Brooks demolish Jimmy Bristow 5-0, as Keelan Kay needed all nine legs to get the better of Joshua Richardson. The Final became a very one side affair, with Keelan Kay winning only one leg, which was leg one, before Brooks out scored Keelan Kay in the final, who finished this year third on the UK Order of Merit. Brooks wins his second event of the weekend after picking up the second event on Friday.

Nathan Rafferty won the first event of the day, beating the winner of event 7 Ted Evetts 5-4.

Rafferty’s run to the final saw him drop just five legs. Nathan started the day with a 4-2 against Lloyd Walker then followed that up with back to back whitewashes against Luke Rutter and Jarred Cole.

Nathan Rafferty then beat Callum Matthews 4-1 before consecutive 5-1 wins against Tyler Radlett and Bradley Brooks to set up a final tie against Bradley Brooks. Neither player produced the standard we expected, but it was Nathan who got his hands on the £2000 prize money in this event and finished second on the Order of Merit.

With Bradley Brooks already in the Grand Slam of Darts, Nathan Rafferty will be joining for finishing second.