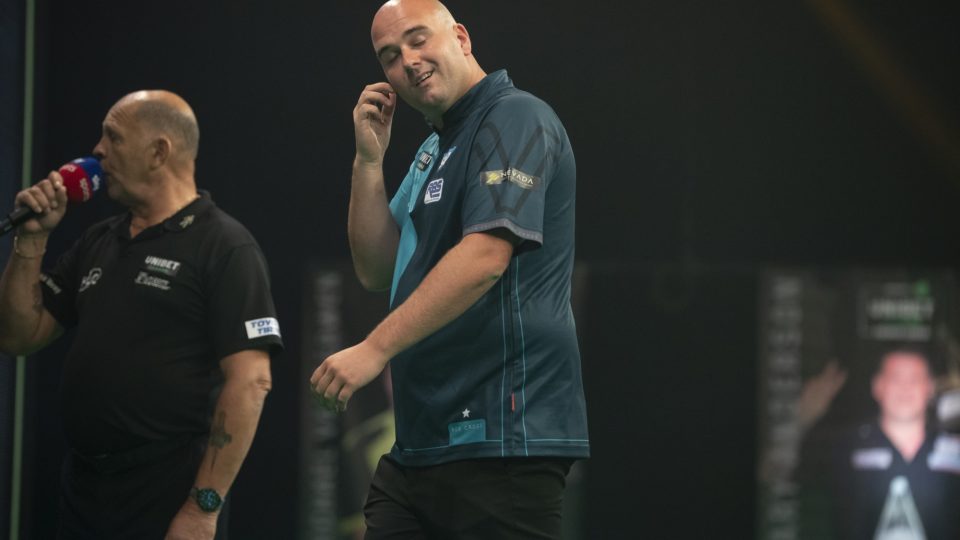 Rob Cross has been eliminated from Premier League Darts after losing 7-5 to Nathan Aspinall tonight.

The elimination was confirmed after wins from both James Wade and Peter Wright meant that Voltage could not catch their points tallies.

Cross eliminated after defeat to Asp

A valiant comeback effort came just too late as Rob Cross lost 7-5 to Nathan Aspinall. The result ultimately eliminated Cross by the end of the night.

It was a slow start to the match with the first 4 legs going on throw without much challenge. But the fifth leg saw Aspinall produce a fantastic 146 finish to break Cross in style. He then raced to a 6-2 lead and looked certain for victory.

However, Voltage did not lie down. The 2018 World Champ won three legs on the spin including a 14 dart break. But it was Aspinall that had the throw in the deciding twelfth leg. The Asp kicked off with a 180 and saw the match out on D5.

It solidifies Aspinall’s place in the top 4 with 11 points, however saw Rob stuck in ninth place with only five points. It allowed Wright and Wade to have their Premier League destiny in their own hands, and their respective results sealed Voltage’s fate.

Michael van Gerwen captured some of his best form as he won 7-4 against an equally impressive Jose de Sousa.

From the first leg MVG showed his intent, with a BULL-25-BULL checkout with Jose not even on a finish. The match went on throw until 3-2 van Gerwen with both men averaging 110+.

Leg 6 seen the first mistake though, with Jose busting 40 and the Dutchman punishing on D11 to break and lead 4-2. He followed up with back to back maximums in the next leg and made it 5-2.

The game slowed down a little with both men missing a cluster of doubles in the final two legs, but Mighty Mike got the job done with a 104 average and 7 180s to help. He moves second in the table with signs that he may be soon top of the perch again.

James Wade secured his safety from elimination by beating debutant Jonny Clayton- and did do in emphatic fashion. It was easily his best performance since filling the space left by Gerwyn Price’s failed Covid test.

The pair then held comfortable until 5-2 Wade, when the only ton-plus out was struck with a 101 to break for The Machine. The 11 time major winner then wrapped up the 2 points with a 12 darter. Wade averaged 105 which includes a 21 darter and 13 missed doubles. Showing the higher scoring power that Wade was able to achieve.

This result guaranteed safety for Wade and catapulted his up into the Top 4. For Clayton it moved him down to 8th and means he is now without a win in 5 matches.

Dimitri van den Bergh and Gary Anderson missed a staggering 46 doubles between them as the Belgian won 7-5.

Anderson started with a 100 checkout in the opener and looked the better player in the early stages. Then the doubles went missing for both. Gary missed 2 in leg 3 and got broken, before missing 6 in leg 4 and going 3-1 down.

Leg 5 saw a rare bit of quality as Dimitri missed D18 for a 9 darter. He cleaned it up for a 10, but then the wheels came off. The game got back to 5-5 and Gary missed 5 darts to go 6-5 up. Dimi punished and then held in the final leg despite Anderson missing 4 at D7 for a point.

Too many missed doubles to mention, and ultimately too many for Gary to earn a point. Dimitri unimpressive with only an 87 average but ends the night on top of the Premier League Darts tale with The Flying Scotsman still on 8 points.

Peter Wright was unspectacular but managed to gain the 2 crucial points to see him qualify past Judgement Night.

Wright was allowed to hold in 19 darts to open and soon had a 3-0 lead despite not much to shout about, as Duzza missed two darts to break. Relief did come for Glen when he pinned a 121 out on the bull- a feat even he was surprised at.

There was not much else to comfort Durrant who went 6-1 down after a sublime 156 from Snakebite. The man from Middlesbrough then missed 3 darts to claim a consolation second leg, and went down 7-1 in the end.

Glen is yet to get a point in the league and plays his fellow eliminated player Rob Cross tomorrow evening. Peter will now set his sights on the Top 4 with Jose de Sousa up tomorrow.