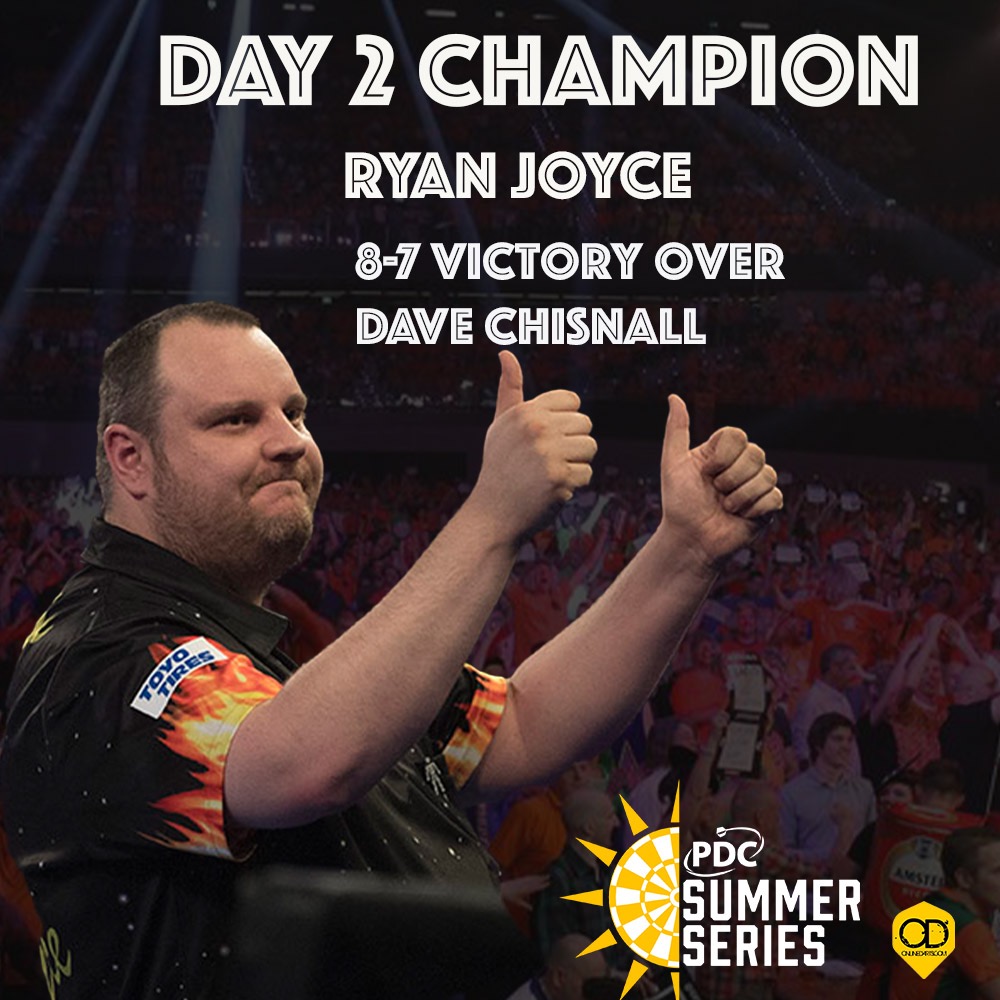 Joyce was 7-3 down, but reeled off five straight legs against Chizzy, to win his first ever PDC ranking title. He also all but secured his first ever appearance at the Betfred World Matchplay.

The other main developments on day two saw:

It was a special day for Joyce, as he won his maiden PDC ranking title after a fantastic day.

Joyce then came through back to back last leg deciders. First, he beat Madars Razma in the last 16, and then the three time BDO world champion Glen Durrant.

In the semi final, he put in his best performance of the day, defeating Gary Anderson 7-3 with an average of 102.

That took him into the final against Chisnall, and he started slowly, going 6-2 and 7-3 down. It seemed that he would fall in his first ever ranking final, but the man from Newcastle clawed his way back into the game.

Chisnall missed four match darts in the 12th leg, which Joyce won to take it to 7-5. Then in the final leg, Chizzy couldn’t find the bull to get over the line. This allowed Joyce to have darts for the match for the first time, and he found D10 with his second dart to win his maiden PDC crown.

Speaking after his win, Joyce told Online Darts: “I’m absolutely over the moon. I can’t describe how I’m feeling right now. It hasn’t sunk in to be honest.

“I thought the game was done and thought Dave was going to win a leg at some stage. So I tried to enjoy the match and make the score a bit more respectable.”

So close for Chisnall

For Dave Chisnall, he will wonder how he let that title get away.

After reaching the quarter finals yesterday, the man from St Helens started the day brightly again. He won 6-3 against Aaron Beeney, 6-2 v Jamie Lewis, and beating Benito van de Pas 6-4 to win his board.

He then beat Maik Kuivenhoven, the man who put out Michael van Gerwen, 6-4, before producing a 102 average to sail past Martijn Kleermaker 6-2 in the quarter finals.

That set up a semi final against Nathan Aspinall, and The Asp was visibly irritated by something during the game. Chisnall kept his cool however, and won 7-5 to get his place in the final.

Chisnall was looking for title number 16 today, but he’ll be ruing four missed darts at D16, as well as a missed bull in the deciding leg, in his hotel room in Milton Keynes tonight.

There was a lot of drama elsewhere on day two of the PDC Summer Series.

Simon Whitlock lost in the first round to Scott Mitchell, meaning that he drops to seed number 15 for the World Matchplay. Glen Durrant, who remains 16th, is only £250 off him after another quarter final display.

Nathan Aspinall, Gary Anderson, Daryl Gurney and Adrian Lewis all got past round one today after losing in the opening round yesterday. By contrast, Michael Smith and Darren Webster, who had good runs yesterday, fell at the first hurdle.

In the race for World Matchplay qualification, Dimitri Van den Bergh lost in the first round for the second day in a row. He could be in danger of missing out if he fails to win again tomorrow. Elsewhere, Ryan Searle also failed to win, and he falls out the qualification spots after Ryan Joyce’s win. Searle however, is just £500 behind Ricky Evans in the race to remain in Milton Keynes for next week’s tournament.

How can I follow day three of the Summer Series?

We’ll have day three, and the rest of the Summer Series, covered at Online Darts.

There will be a live blog from 11.30am giving you results and ranking changes as they happen.