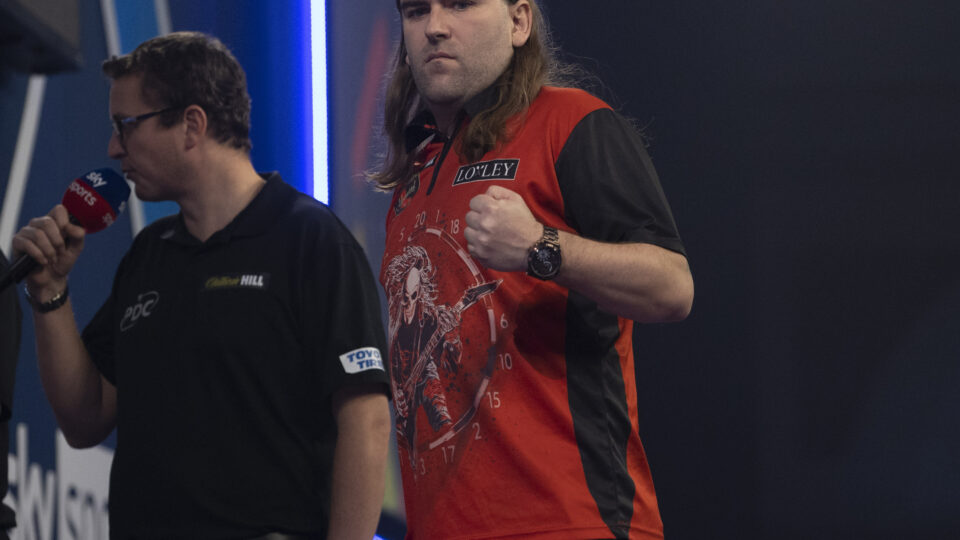 Ryan Searle had only dropped seven legs throughout the day. He dropped another seven in the final however, he will not mind after coming through the George Noble leg to win his second pro tour title.

Searle cruised past Mark McGeeney, Jim McEwan & Raymond van Barneveld to make the last 16 while only dropping five legs in those first three games. A 6-1 Victory over Rusty-Jake Rodriguez and the same scoreline against Luke Woodhouse got him into the last four, Then we saw the performance of the day with a semi final bagel against Martin Lukeman. Ryan Searle averaged 116.90 to defeat Martin Lukeman 7-0.

Heavy Metal’s performance in the final was his weakest of the day average wise however, after Peter Wright was unable to hold throw in leg 14 after missing a match dart. It seemed to have an impact on him in leg 15 as he was unable to find his scoring and it was Ryan Searle who won it with a 74 checkout. Ryan Searle averaged 94.96 against Peter Wright’s 102.59 in another classic final.

After winning the World Matchplay in Blackpool less than two weeks ago, Snakebite returned to a final however, this time it wasn’t his name on the title at the end of the day.

Wright hit averages of 91, 99 and 101 to win his board against Wayne Jones, Matthew Edgar, Alan Soutar. Snakebite then eased past Andrew Gilding with a 6-1 win, before a 109.63 and a 6-4 win against Martin Schindler to set up a rematch of the World Matchplay final. It was Peter Wright who was victorious again against his former lodger Dimitri Van den Bergh 7-4.

Michael Van Gerwen got knocked out in round one to Kevin Doets. In an all Dutch first round affair Kevin Doets produced the best performance of his career to date to defeat The Green Machine with a 102.15 average.

The seeds continued to drop in round one with Joe Cullen, Dirk van Duijvenbode and Krzysztof Ratajski also defeated in the round of 128. Also in round one we saw the magical 9 darter and this time it was Ron Meulenkamp in his defeat to Rusty-Jake Rodriguez

With other big names like Gerwyn Price, Nathan Aspinall and Rob Cross being knocked out before the round of 16, it opened up the draw for a few of the un seeded players like Keane Barry & Luke Woodhouse to reach the last eight and also Martin Lukeman who had a very impressive day reaching the last four.

The game of the day came in the second round between Adrian Lewis and Michael Smith. For a long time we have wanted to see these two players compete against each other in full flow and we certainly got that today. It was Jackpot who was the winner today beating Bully Boy who averaged 102.99. However, it was a vintage performance by Lewis who averaged 103.25 in a 6-4 win.

View the full results on day two of the PDC Super Series here.