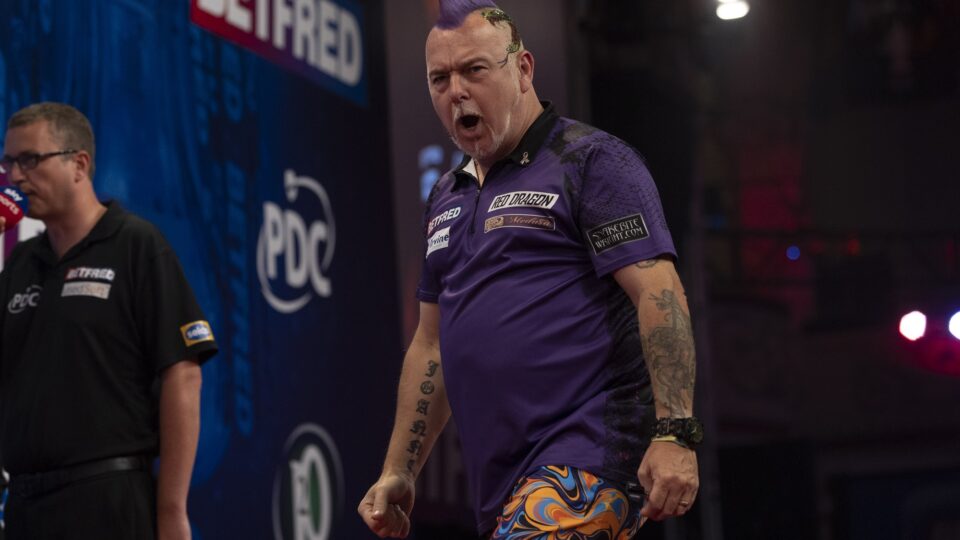 Peter Wright once again won on the final day of a PDC Super Series event.

The World Matchplay champion followed a runner up performance yesterday with an 8-7 victory over Jonny Clayton in the final to take Players Championship 23.

It’s the fourth time that Snakebite has won a Pro Tour title on the last day of a Super Series this year, which takes him onto five tournament victories in 2021.

After being locked with Clayton on four titles, Wright took the lead in overall titles won in 2021 with victory in Barnsley today.

Wins over Jack Main, Joe Murnan and Karel Sedlacek saw him win his board. He followed it up victories over Stephen Bunting and an impressive Martin Schindler got him to the semi finals. He then came through a tight semi final against Jamie Hughes to reach the final.

It was a straightforward day for Clayton though. He cruised past Glen Durrant, José Justicia, and Chris Dobey to win his board, before victories against William Borland and Ryan Searle and James Wade got The Ferret into the final, dropping just seven legs in the process.

Both held in the first two legs of the final, before Snakebite found a 70 checkout to break and go 2-1 up. Four further holds followed, before The Ferret, who’d already hit a 140 checkout in the fifth leg, did so again in the eighth, for a 12 dart break and to level up at 4-4, with Wright on 68.

The ninth leg saw both miss multiple darts to win it, before Wright cleaned up eight to immediately break back in 20 darts. 31 darts later, Snakebite was one away, before missing match darts in the next. Clayton took the opportunity, finding an outstanding 167 outshot to get a break back.

This seemed to energise the Premier League champion, as he took advantage of more missed match darts from Wright to win two legs in 33 darts, to level the contest up at 7-7 and set up a last leg decider. There, despite missing a further two match darts, Snakebite got over the line at the eighth attempt, hitting double 12 to take home the title.

Hughes was among a number of players who fell just short in the race to qualify for the World Grand Prix. His run saw him beat Steve Beaton, Josh Payne and Jim McEwan to reach the last 16, before beating both Maik Kuivenhoven and Daryl Gurney before losing to Snakebite.

Wade produced his best day on the Pro Tour for a while. The UK Open winner saw off Sean Fisher, Ryan Murray and Gabriel Clemens to win his board, before winning against Andy Hamilton and his opponent in that UK Open final Luke Humphries to make the last eight. However, he came up against an inspired Clayton in the semi final, and could not overcome him.

Despite losing to Hughes, Superchin’s run to the last eight has helped him into the qualification spots for the Grand Prix. Ryan Joyce, Dobey and Raymond van Barneveld were among those that just missed out.

Adrian Lewis still has the first Euro Tour event of the year to try and move into the qualifying spots for Leicester.

View the full results for day three of the Super Series here.

Top four through on day two of Euro Tour

@KeelanKay180 wins a nervy opening match this Tuesday morning. Kay moves onto 8 points with a 4️⃣-2️⃣ victory over Alan Norris in Group A #ODLiveLeague

Fantastic Live Lounge tonight thank you, everyone who joined us 💛💛

Join us in the OD Live Lounge right now!
This week:

What the full match now 📺👇🏻

Phill, Jack and Lee will spend the next hour or so talking over all the big news from the last week in the darts world.

All set for the weekend