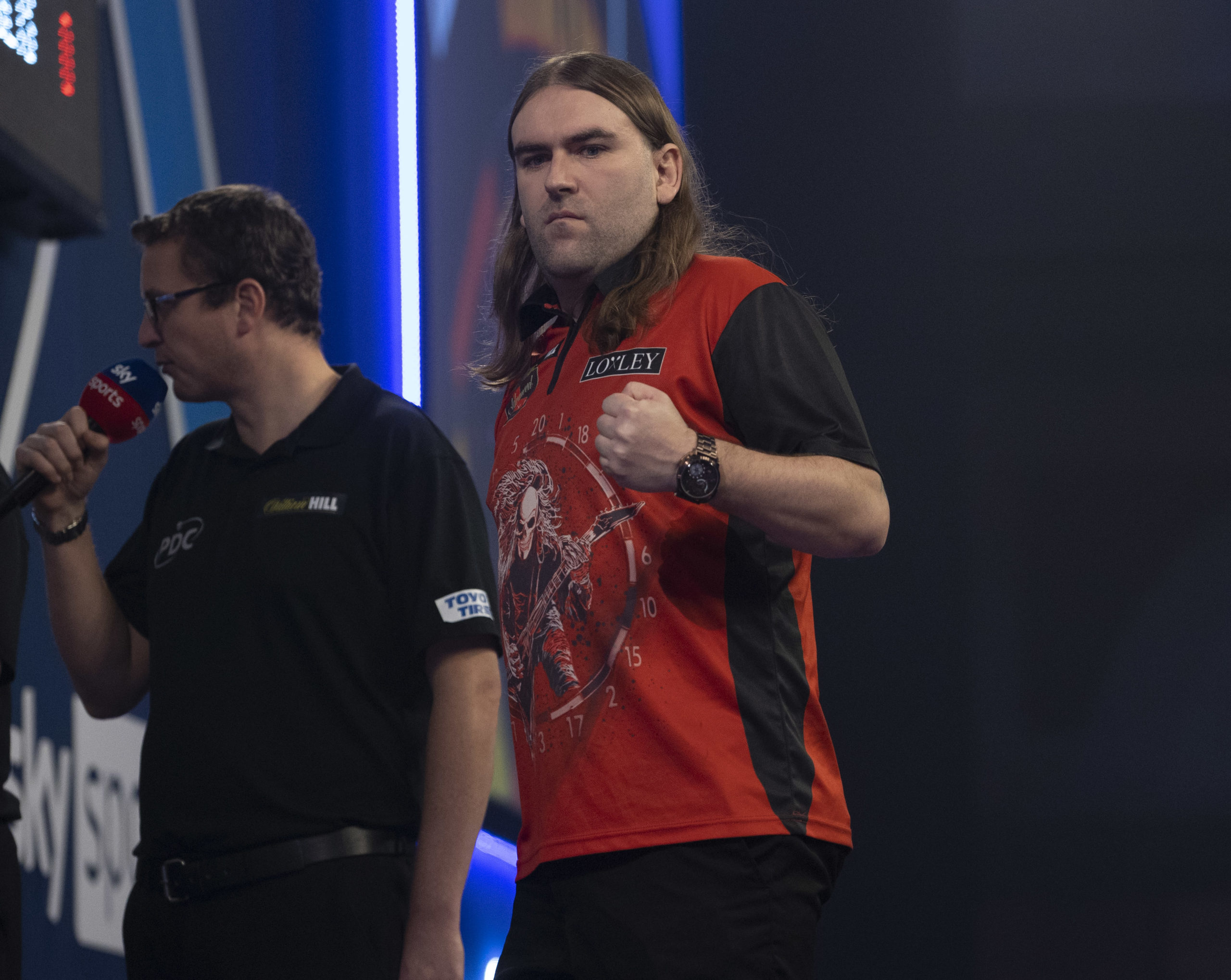 Ryan Searle became the second player to knock out a seed on day six of the World Darts Championship.

Heavy Metal defeated Jeffrey De Zwaan to move into the last 32 for a third straight year, despite The Black Cobra hitting nine maximums.

Vincent van der Voort fought back to win 3-2 against Ron Meulenkamp, while Jonny Clayton won 3-1 against John Henderson in the other round two games.

There were only seven games on stage today. Cameron Carolissen was due to face Martijn Kleermaker, however Kleermaker tested positive for COVID-19 and withdrew from the event. His replacement Josh Payne tested negative, but was in close contact with someone who tested positive. As a result, Carolissen receives a bye into a round two game with Danny Noppert.

Ryan Searle took advantage of poor doubling by Jeffrey De Zwaan to move into round three of the World Darts Championship.

The Black Cobra missed five attempts at double to break the Searle throw in the first leg, and it cost him. Despite getting it back to 2-2, Searle produced a 15 dart hold on tops to take the opening set.

Heavy Metal continued to impress in the second set. Breaking in the opening leg with a 78 outshot, he then took the a 2-0 lead thanks to an excellent 130 outshot, as De Zwaan just could not get to finishes in time.

De Zwaan missed a dart to break in the opening leg of third set as well, and just like in the first set, Searle punished him, hitting double four after missing five attempts before to hold. Two breaks followed, before Searle found an 11 darter on tops to win the match 3-0 and knock The Black Cobra out.

Vincent van der Voort became the latest player to produce a comeback from 2-0 down. He beat fellow Dutchman Derk Telnekes 3-2 to seal a place in round three.

In the first two sets of the game, Meulenkamp looked like he could not miss anything on the doubles. Constant two darts combinations and a 144 finish helped The Bomb go 2-0 up, with van der Voort struggling on the outer ring himself.

However, the game changed in the fourth leg of the third set. Trailing 2-1 in the set, Meulenkamp finally missed a chance at double, going inside on double 12 and 6. This allowed The Dutch Destroyer to clean up 25, hitting double eight to win the set 3-1.

That seemed to get Van der Voort rolling, as he reeled off three straight legs to take the fourth set and take the match to a decider. Both held throw twice to send it to a decider, where Van der Voort produced a 14 darter to hold and complete the comeback, winning the set and match 3-2.

Kenny took advantage of six missed attempts at double from Telnekes to win the opening leg, before going 2-0 up. However, the Welshman missed two for the set, as the Dutchman reeled off three straight legs to take the set 3-2.

The Welshman did not let that get him down though, reeling off three straight legs to level up the match. He then went ahead in the third set, before Telnekes fought back again, finding a 13 darter to take a 2-1 lead.

Kenny would once again win a set on throw 3-0 to force a decider, where Telnekes missed bull for a 126 in the opening leg of the fifth set. This allowed Kenny to find tops for a break, and unlike previous sets, did not give up the lead. He held with a 16 darter, before ending the contest with a double eight to get the win. He sets up a meeting with Jermaine Wattimena in round two.

Jonny Clayton had an easier time of things in his 3-1 win against John Henderson.

Henderson started well by breaking in the opening leg, however Clayton reeled off three straight legs, hitting an 80 checkout for a 14 dart break to take the first set 3-1. The Ferret then went 2-0 up in the second before the Scot held with a lovely 109 shot. But, he then missed three darts to level up the set, allowing Clayton to find double six for a 3-1 set and a 2-0 lead.

Clayton looked like he would end the game in quick fashion, finding double eight for a 13 dart hold. However, Henderson would find a lovely 112 checkout, followed by back to back 15 darters, to take the third set 3-1 and trail 2-1 in the match.

Henderson went 2-0 up in the fourth and looked like he would take the game to a decider. However, he missed three darts to do so in the third leg, and Clayton, one half of Wales’ World Cup winning team, punished by hitting double 12. This gave The Ferret the spark he needed, finding a lovely 140 to level, before hitting for a double 10 for a 17 darter to end the contest, winning the set 3-2. The Ferret faces either Joe Cullen or Wayne Jones in round three.

What else happened on day six of the World Darts Championship?

Matthew Edgar won his first ever game  on day six of the World Darts Championship, defeating Maik Kuivenhoven 3-0. Kuivenhoven, making his debut at the event, was nervous, going just 1/11 on the outer ring. An exhibition in outer ring hitting, including a 112 to win the second set, saw Edgar come through the game, finishing 9/12 on his doubles. Edgar will take on Mensur Suljovic in the next round.

Keegan Brown defeated Ryan Meikle 3-0 to set up a meeting with Dave Chisnall in round two. Brown, who’s been working in the NHS for the majority of the year, dropped just four legs in the process, as Development Tour Order of Merit winner Meikle struggled.

The Needle won the first set 3-2 with a 15 darter, before whitewashing the second set 3-0. It was a similar story to the first set in the third set, as Meikle held throw twice before Brown found double 14 for a 14 darter to end the contest.

Jason Lowe missed 25 darts at a double, but still managed to defeat Russia’s Dmitriy Gourbnov 3-1. Lowe punished plenty of missed darts from the Russian to go 2-0 up, before missing tops to end the match. Gorbunov cleaned up 25 to go 2-1 down, but could not stop Lowe finding a 12 dart deciding leg of the fourth set to end the contest. Lowe will face Michael Smith in the next round.