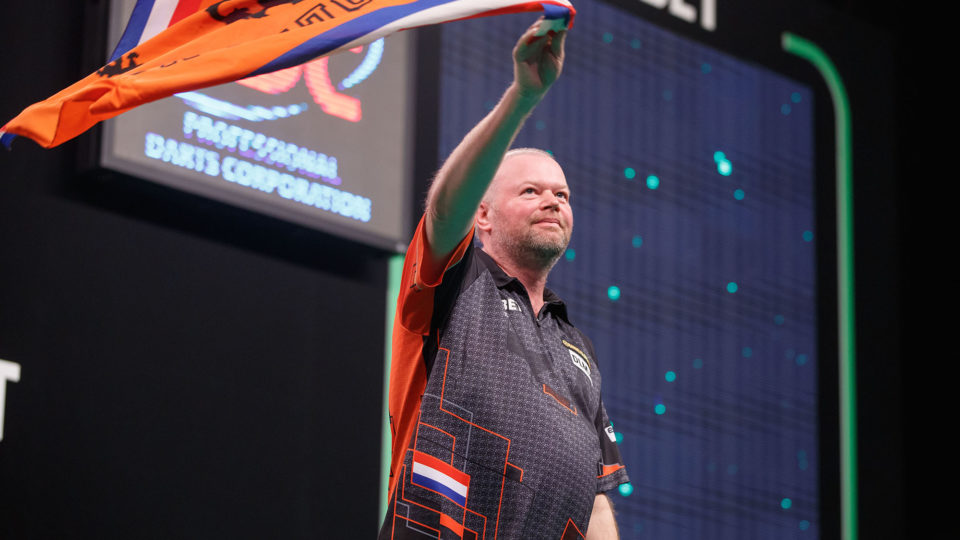 Raymond van Barneveld secured his place in the Final Stage on day two of 2021 PDC Q-School.

The Dutchman, who is bidding to win his tour card back after coming out of retirement, lost in the last eight stage in European Q-School to Michael Rasztovits. However, he is top of the Order of Merit and cannot be caught by enough players. This means he will be in the 128 players bidding to win Tour Cards on Sunday 14 February.

In the UK, day two at Q-School saw:

All win a space in the Final Stage.

After losing in the last 16 yesterday, Barney needed another solid day to confirm his spot in the Final Stage in Niederhausen.

Wins over Niko Springer and Kristiaan de Boer saw him set up a showdown with young German star Nico Kurz. The Dutchman won 6-3, before winning 6-2 against Jeffrey Van Egdom in the last 16.

That secured his spot in the Final Stage. However, he can choose to play tomorrow, after losing 6-4 to Austria’s Michael Rasztovits in the last eight.

Joining those two will be Russia’s Boris Kolstov. He dropped eight legs in four games, culminating in a 6-3 victory over Ricardo Pietreczko.

Davy Proosten saw off Franz Roetzsch 6-3, while Lukas Wenig hit a 98 average in a 6-1 victory over Eimardo Van Engelen.

Tomorrow is the final day for players to qualify for the Final Stage from Stage 1A.

View the Order of Merit after Day Two.

2021 European Qualifying School Day 2 🎯 – the following players made it through to the last four today to book their place in the Final Stage:

All results of the day can be found at: https://t.co/FIkHDu7pXG pic.twitter.com/8fACJz0nkA

Mike Warburton produced one of the best averages of the day, a 93.5, to earn his spot in UK Q-School Final Stage. He defeated fellow Welshman Sam Cankett 6-1 to seal his place in the event on Sunday.

Joining him are two Scotsman. Ian Mackenzie, arguably the most consistent player of the day in Milton Keynes, dropped just nine legs in five games. He eventually secured his place by beating Brett Claydon 6-2.

Jason Hogg saw off Josh McCarthy, taking out a 107 checkout to win 6-3. McCarthy though has also secured his place in the Final Stage, having made two straight quarter finals.

Sam Booth was the final player to win his spot. He let slip a 5-1 lead against Aaron Monk, but survived to win the final leg 6-5.

Tomorrow will see a whole host of big names including

To name a few, all bid to win enough points to get through to Final Stage via the Order of Merit.

View the Order of Merit after Day Two.