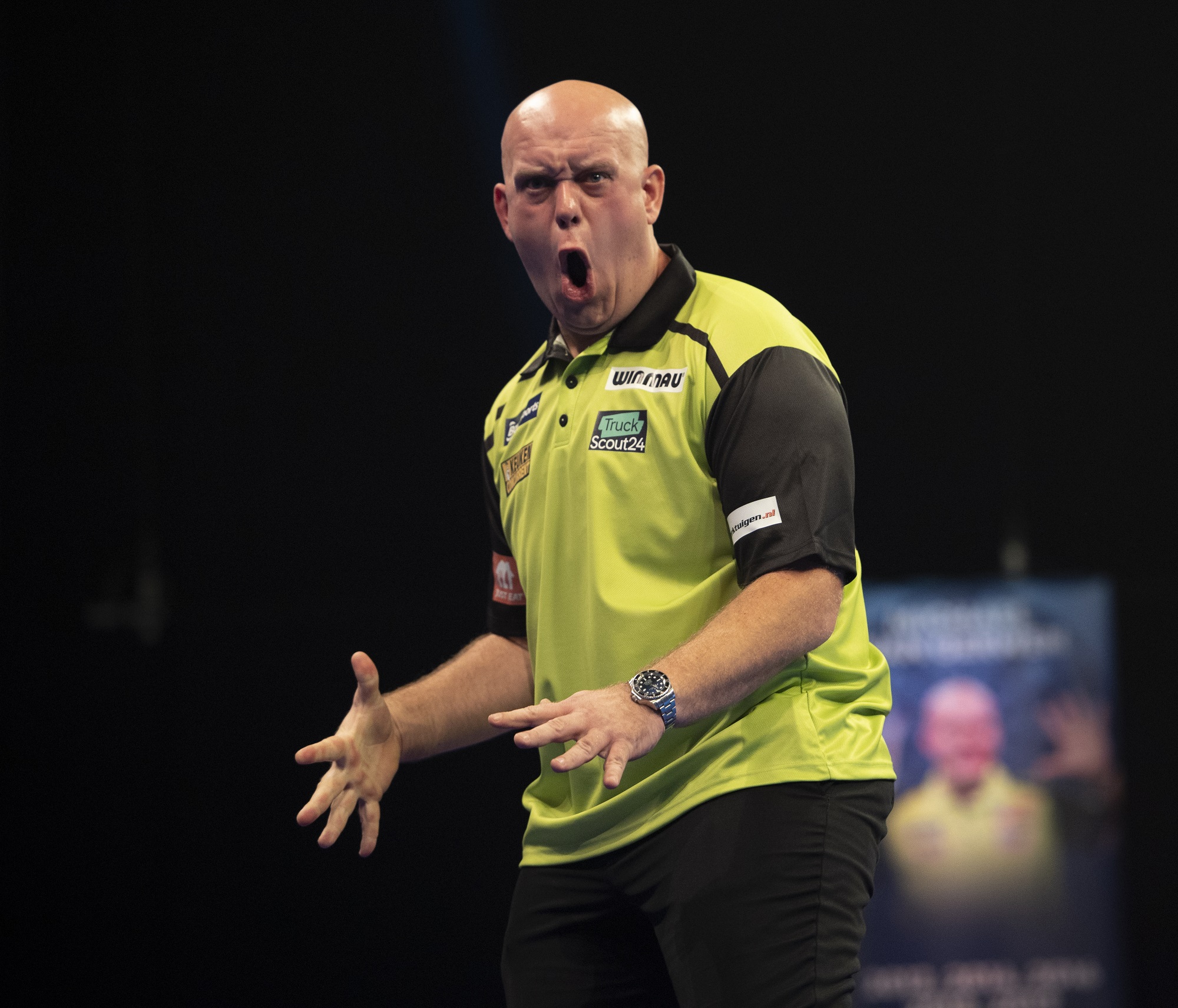 Anderson also saw off Noppert in straight sets, but Simon Whitlock had to work for his success over Mervyn King and van Duijvenbode took advantage of some slack doubling from World Matchplay champ Dimitri van den Bergh to progress.

A game that was touted as a potential cracker started well for the red-hot form man Devon Petersen, with a 16 dart hold of throw. A back and forth first set saw MvG follow up with a hold of throw to level on D18 from 90, before a high scoring leg concluded in Petersen taking a 2-1 lead in the first set from a 14 dart hold on D5.

The first glimpses of what was to come reared their head towards the end of the first set. MvG took the fourth and fifth legs to win the first set whilst taking advantage of agonising misses from Petersen, and the South African never seemed to recover despite hitting eight 180s in the match.

With MvG averaging a ton after the first set, the writing on the wall really did start to become apparent when a beauty of a 146 gave MvG the first leg of the second set. Petersen struck back with a 17 dart hold, and with the pair sharing the next two legs, a critical moment in the match passed the African Warrior by.

With MvG missing tops for a 68 out, Petersen fluffed his lines with three to take out 20. Van Gerwen returned to also take out 20, with the same outcome, and a glorious chance for Petersen to win the set and level the match presented itself. He couldn’t manage to find D2 with any of his three, and MvG duly accepted the mishap to clear up a 5 out shot and take a commanding two set lead.

In the third set, Petersen failed to take out 50 once again, which Van Gerwen punished on D16 to secure an all important 18 dart break in the first leg. The man from Vlijmen extended that leg lead on D8, and although Petersen had a minor reprieve by a 15 dart hold of throw on what had been a torrid D16, Van Gerwen polished off an impressive performance by nailing D9 on a 72 outshot; a performance that included a 96.44 average for the green machine.

Anderson advances after win over Noppert

Gary Anderson blitzed his way to a 1-0 set lead in this one, storming ahead in just 47 darts with Noppert unable to reach a finish against what seemed like an irresistible Ando demeanour.

The Flying Scotsman continued his stupendous start to the match by flying into a 2-0 leg lead in the second set with a 13 dart break and 11 dart hold, before Noppy set the recovery in motion with an 18 dart hold himself concluded by a a tops finish of 76.

Noppy then nailed D12 with Ando waiting on 25 to level the set, but it was Anderson who eventually won the second set, punishing the Dutchman for vitally failing to hit D10 on an 89 which would’ve been the perfect tonic for an impressive comeback.

An early 52 out and break of throw for Noppy in the first leg of the third set was quickly wiped out by Ando, who swiftly broke back with a D16 out of 64. Anderson then looked in good position to hit a nine-darter, but couldn’t hit T17 with his eighth dart; he did make somewhat of a mess of that leg after that. His following three darts at D12 were off target, allowing Noppy to come within a whisker of ruining what seemed to be a near perfect leg for Ando by applying pressure of a 139 whilst on 193.

Anderson would continue to find the required D6 on the back of that, and despite a 20 dart hold from Noppy sending the third set into a deciding leg, and a vitally missed shot at tops to prolong the match, the Scot wrapped up the match on D10 to advance and face Dirk van Duijvenbode in the quarters.

Whitlock and King serve up classic

Four breaks of throw greeted the opening of this match, with the set decided by an eventual hold of throw from Mervyn King which could well have gone the way of Simon Whitlock.

King followed up breaks of throw including a peach of a 112 and a bull finish 87 to take advantage of Whitlock coming just inside of D16 on a 90 out attempt in the deciding leg, nipping in to hit D4 and take the advantage.

King followed up his deciding leg steal to produce another break of throw, this time in 14 darts, before hitting tops to extend the lead only for Whitlock to hit back.

A 134 double-double finish on tops, then a vital 18 dart break of throw, brought the Wizard level, and he then relied on a wayward King effort at bull in yet another deciding leg to level by rattling in a D4 finish and complete a comeback in the second set.

It continued to ebb and flow, and they shared the next four legs to force another decide in set three, and it was King who took the 2-1 lead by pinging D6 with an 18 dart hold of throw.

A 13 dart hold from Whitlock opened up the fourth set, followed by a 12 dart break which culminated in a fifth 180 aiding him to 115 after 9 and that was duly taken out with aplomb.

King levelled with a 76 out and a 36 out on a vital 21 dart hold, only for that hard work to be undone as a slow start on the double start in the deciding leg of the fourth set eased Whitlock down to 72 which he confidently took out on D16 in a 15 dart hold.

A cagey deciding set eventually saw Whitlock get over the line, but we did indeed go all the way. Two holds and two breaks, including an expertly taken Shanghai from Whitlock, eventually allowed the Australian to recover from a slow double-start in the previous, penultimate fourth leg to nail 56 on the D16 to confirm his place in the next round.

Van Duijvenbode took advantage of some awkward misses from Dimitri in the first set, holding throw on three occasions; the most important arriving in the deciding leg, hitting D4 at a crucial moment to capitalise on the Belgian missing inside of D8.

The Dutch debutant continued to grow in confidence, firing in two 174s in the opening leg of the second set to set up what would become an impressive 13 dart break of throw.

Van Den Bergh showed his class and threw back-to-back 14 darters, a hold and a break, to go 2-1 ahead in the second set, only to be stunned by a tremendous double-double finish on the 19s to take out 95 for van Duijvenbode to level up the set.

Dimitri made a critical error in the deciding leg, missing the big number on a 58 out attempt having set it up perfectly with a 134 on the previous visit. Van Duijvenbode slides into the D7 bed on his attempt on 86 but rectified his error well by nailing D9 to secure an important two set lead.

Two quick legs from DVDB had van Duijvenbode reeling, and although the latter responded with a superb 13 dart break, it was the Belgian who got a foothold in the contest by taking a set back with a break of his own on D9 with van Duijvenbode waiting to pounce on 80.

The Dutchman sealed his progression into the quarter finals to extend an already magnificent debut performance with a last dart in hand finish of D8 in the first leg of the fourth set, another marvellous double-double finish to take out 97 and a severe punishing of DDVB only managing 36 from his first six darts in the final leg of the fifth set.