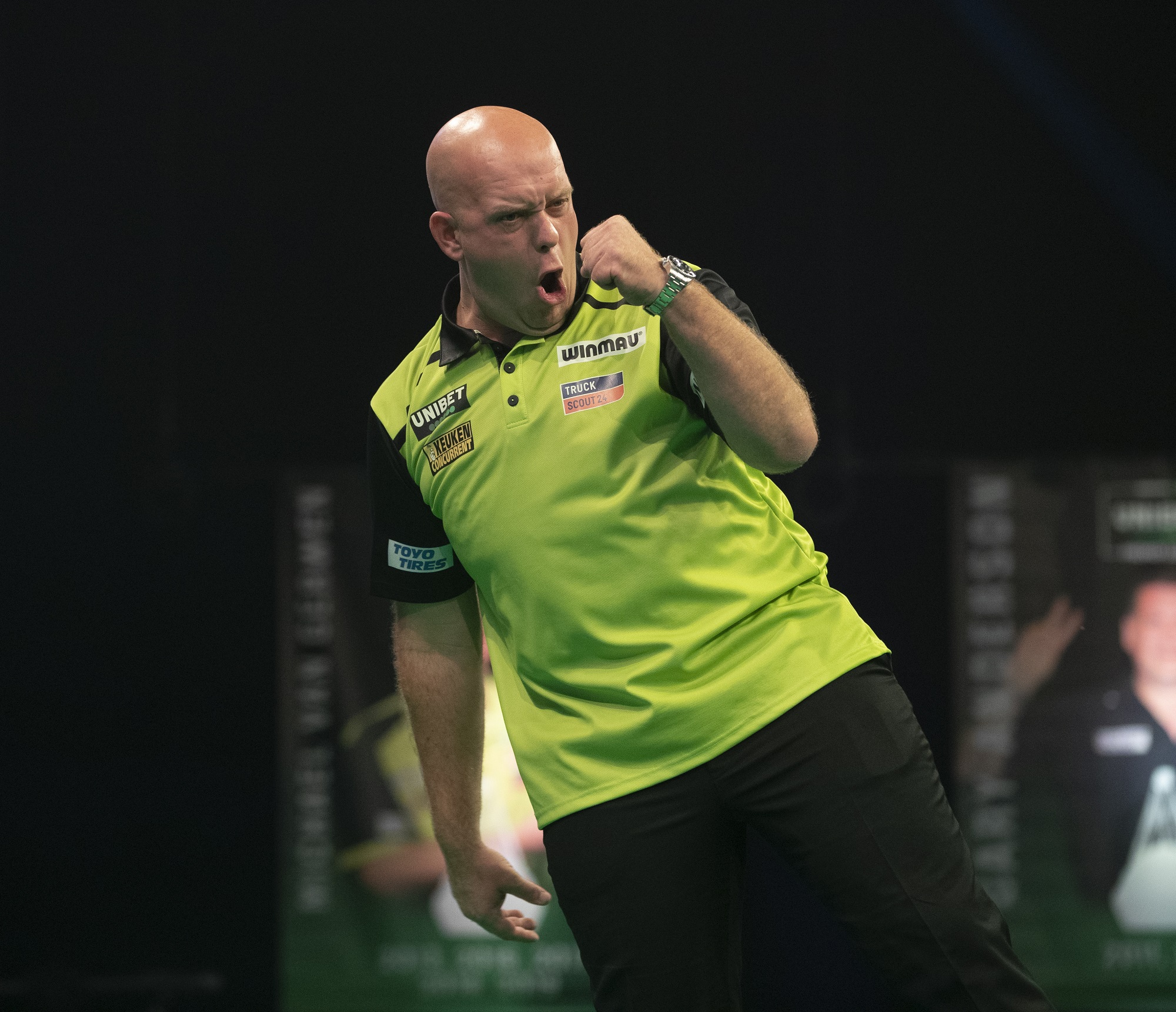 Michael van Gerwen moved back into second spot on night ten of the Unibet Premier League.

The Green Machine won his first game in three with a scrappy 8-6 win over Nathan Aspinall.

Elsewhere on night ten of the Premier League:

First win in three for MvG

Michael van Gerwen got back to winning ways on night ten of the Premier League. He defeated Nathan Aspinall 8-6 to go second in the table.

Van Gerwen came into the game having lost two straight, and questions were being asked about whether he would lose three straight for the first time in his Premier League career. For a while, it would seem like it would.

The first four legs saw a shed load of darts at double, but Aspinall got a crucial break in the fourth leg. He hit D2 to go 3-1 ahead, and hit it again in the next leg to move 4-1 clear.

The world number one though showed why he’s a five time Premier League champion. After an unorthodox 100 out to move 4-2 behind, he found an 11 dart break of throw to get the game back to 4-3.

After levelling up, The Green Machine punished missed darts at a double in the nineth, finding a D20 to move ahead for the first time. Despite Aspinall levelling up, van Gerwen found a break of throw again in the 11th leg, hitting 68 to go 6-5 in front. This ultimately decided a very scrappy match, as both players held their throw in the final two legs, meaning MvG won 8-6 and gained revenge for Aspinall defeating him in Cardiff back in February.

The opening two legs were shared, before Durrant looked to have taken control. He won three straight legs, which included two magnificent 171 set ups, to go 4-1 up.

Price came roaring back, hitting a brilliant 116 to make it 4-2. He then capitalised on three missed darts from Duzza to win the seventh leg, and get the break of throw to trail 4-3.

The Welshman though could not capitalise. He had a shocking start to the eighth leg, which allowed Duzza to recapture the break and go 5-3 up.

Despite a fantastic 140 out from Price to hang in and make it 6-4, he once again failed to find his scoring in the following leg. Durrant won the final two legs to complete a league double over Price, and remain top of the Premier League table.

After the game, the players did not acknowledge each other, with tensions seemingly running high on stage.

The World Champion started brightly, winning the first three legs, which featured a brilliant 102 outshot in the process. Anderson got his first leg on the board with a D16, despite nearly miscounting.

The next three legs went with the throw, and when Wright hit a 127 finish to lead 5-2 with an average of over 105, it seemed the game was only going one way. However, The Flying Scotsman then flicked the switch.

He punished two straight legs of missed doubles from Wright to get the break back and get the game to 5-4, and nearly miscounted again before holding throw to level the game at 5-5.

Anderson found a brilliant 98 checkout to take a 6-5 lead, and managed to win the next two legs, reeling off six in a row and completing a fantastic comeback to move level on points with Wright.

Michael Smith produced a professional 8-3 win against bottom of the league Daryl Gurney on night ten of the Premier League.

After sharing the opening two legs, it seemed it would be the same old story for Smith in the tournament. After being comfortably ahead in the leg, he missed seven darts at a double to finish it off. This allowed Gurney to break the throw in 21 darts and go ahead 2-1.

But Bully Boy would not be denied. After levelling at 2-2, he would then go and win another five straight legs, which included a brilliant 112 checkout in the process, to take a 7-2 lead.

Despite Gurney getting one more leg on the board, it only delayed the inevitable. Smith would find D12 for the match and go fifth in the table, one point away from the playoffs.