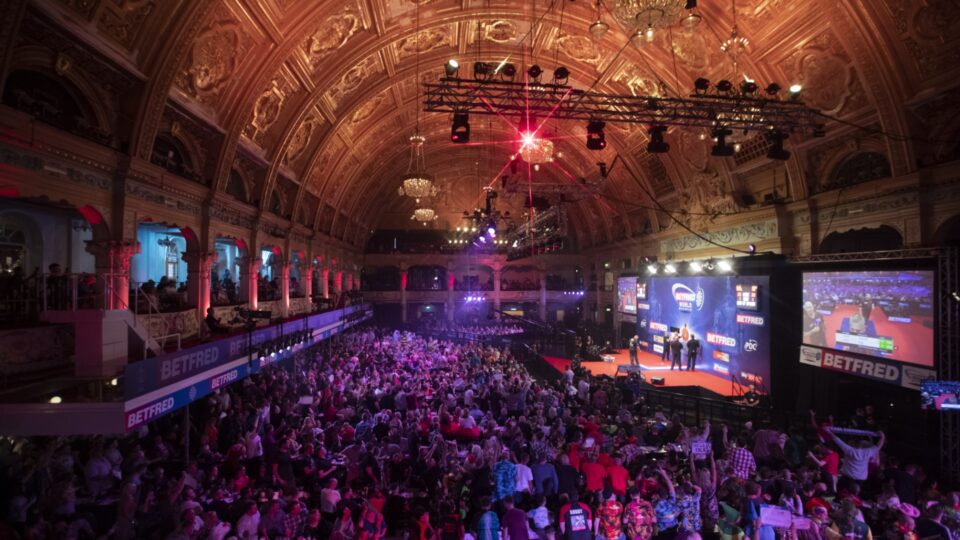 Day two at the Betfred World Matchplay saw Luke Humphries knock the number four seed James Wade out, as seven other players made round two over two sessions of darts.

Today’s action sees the final four first round matches take place, and two former winners of the event get their campaigns underway. It’s also the first night in front of a full house at the Winter Gardens.

Here’s what to look forward to on day three of the Betfred World Matchplay.

The first match of the night sees Daryl Gurney face off against Ian White. Gurney reached the semi finals of this event back in 2019, before surrendering a huge lead to eventual champion Rob Cross. Since then, he’s made just one PDC TV semi final, and his form has suffered a bit of a dip.

It’s been a similar story for White over the last 18 months. After reaching the semi finals of the Players Championship Finals in 2019, his form has dropped significantly. After not winning money on the Pro Tour and Euro Tour as he has for the last few years, he needs a run at a big event. Which one of Gurney or White will move into round two?

The second match is a rematch of a first round game in 2019, when Mervyn King beat then UK Open champion Nathan Aspinall. Aspinall’s TV form had dropped in the last 12 months, but reached the semi finals of the Premier League earlier this year. He’s been consistent on the Pro Tour, but is without a ranked tournament win in over two years, and is yet to win a game at the World Matchplay.

King has been the nearly man for so long in the PDC. He reached the finals of the Players Championship Finals and The Masters, one game away from his third appearance in the Premier League, and is back in the World Matchplay for the 14th time in 15 years. Will it be repeat for King, or revenge for Aspinall, in this first round match?

The third game sees the return of Michael van Gerwen to the Winter Gardens, as he takes on Damon Heta. By MvG’s standards, it’s been a quiet 12 months. Since losing to Simon Whitlock at last year’s World Matchplay, he’s won just one TV tournament in the Players Championship Finals. He’s yet to taste victory in a tournament in 2021, but many still think he’s the man to beat, despite winning just two games at the Matchplay in three years, and not winning this tournament since 2016.

Heta however has quietly gone about his business in the last 18 months. Ever since winning a tour card in Q-School, he’s produced some outstanding darts, making the quarter finals in the Grand Slam of Darts and Players Championship Finals. He’s also won a Pro Tour event, and took home the Brisbane Darts Masters trophy in 2019. Can he produce a huge upset on his Blackpool debut, or will Van Gerwen show why he is the favourite to win this title?

The final first round game is a rematch of a first round game in 2018, as Gary Anderson faces Stephen Bunting. Anderson won that game, and eventually won the tournament, his first and only World Matchplay. After reaching the finals of both the Matchplay and World Darts Championship last year, we’ve seen glimpses of The Flying Scotsman at his very best.

However, it will be a difficult challenge against Bunting. The Bullet made the World Championship semi final earlier on this year, and ended a five year wait for a PDC title earlier this month at the recent Super Series. With Bunting in such good form, will he reverse the result from 2018? Or will Anderson reach the second round of the Matchplay for the ninth straight year?