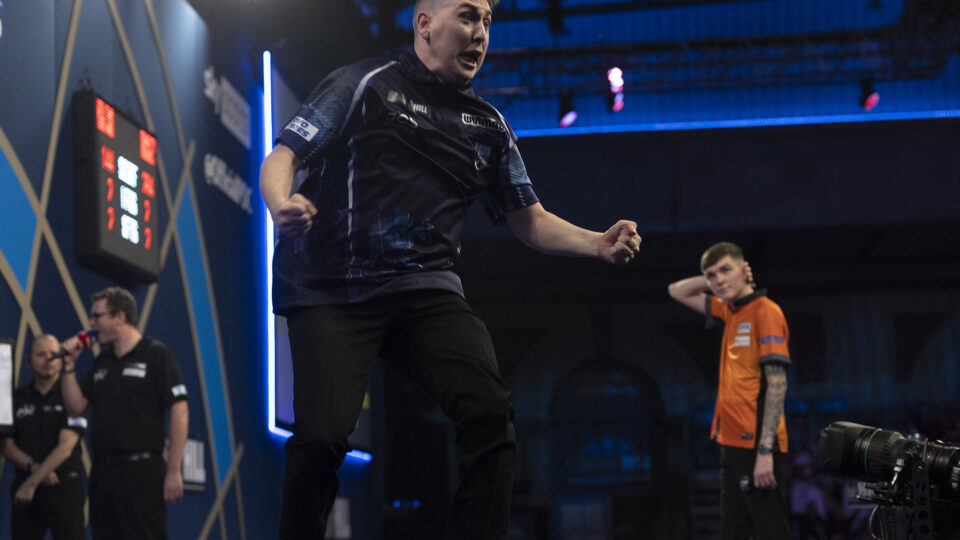 On his World Darts Championship debut, William Borland lit up Alexandra Palace with a nine-dart finish in the deciding leg of an epic match with Bradley Brooks.

After a thrilling encounter between two of the sport’s best emerging prospects, the first ever nine-darter to win a match in a televised PDC event.

Borland nailed the 11th flawless leg in PDC World Championship history, and the first in front of Alexandra Palace fans in almost six years, with the duo equal at 2-2 in the fifth and final set.

In a see-saw fight with Brooks, the 25-year-old, who was playing in only his sixth TV event, landed three of the game’s five ton-plus checkouts.

“It’s the greatest night of my life,” said an elated Borland, who will meet Ryan Searle in round two.

“It’s unbelievable. I’m just loving it. It’s special to hit a nine anywhere, but to do it on the biggest stage of all is just something else.

“Bradley and I played a brilliant game up there, it was a pleasure to play in.

“It’s just great to be here. I’ve played in a couple of TV events before but this is another level.”

Peter Wright, the 2020 champion, got his campaign off to a perfect start by defeating Ryan Meikle 3-0 booking his place in round three.

Meikle, who was struggling to produce his best game on the big stage, didn’t push Wright, who was dressed in his yearly seasonal suit.

“Obviously, Ryan didn’t play anywhere near like he can,” Wright conceded.

“For that reason I found it hard to get going tonight, I can do a lot better.

“But I’m just happy to be through, which is the main thing. I’ve had some scares early in the tournament before so it’s nice to avoid that tonight.” 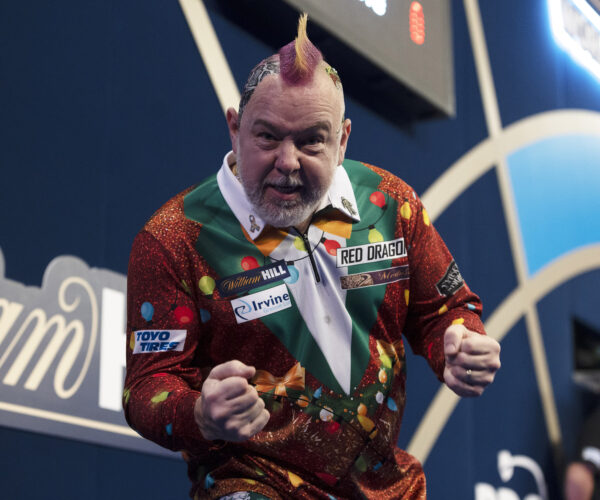 In Friday’s other second-round match, Steve Lennon defeated 12th seed Krzysztof Ratajski to record his best win of his career.

Ratajski was the highest-ranked casualty thus far, losing 3-1 to Lennon, who is making his maiden appearance in the last 32.

Ratajski, a quarter-finalist in last year’s event, was much favoured for a shot at the title and, after dropping the first set, appeared to have found his stride with a 132 checkout that included two bullseyes and a double 16.

Unfazed, Lennon won the third set 3-0 to reclaim the lead, then finished with a controlled performance on his favourite double ten to move to the third round, where he will face either Ryan Joyce or Mervyn King. 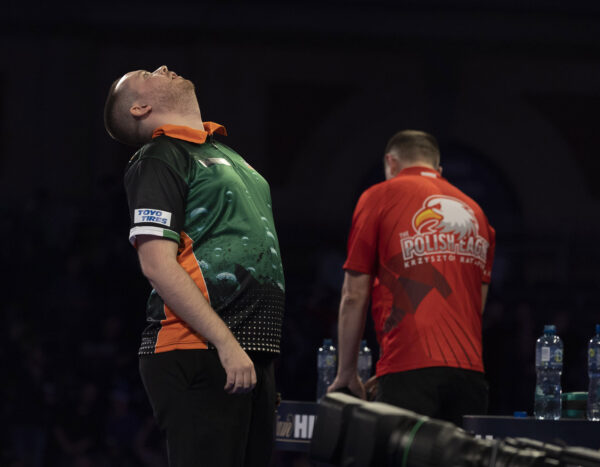 Joyce and Barry proceed after scares

Joyce’s passage to the second round was more complex as he eventually ran out a 3-2 winner against Roman Benecky, who came close to completing an unlikely comeback.

Former quarter-finalist Joyce won six of the opening seven legs to lead 2-0 in sets, with Czech debutant Benecky struggling to acclimatise to the big stage.

However, after the interval Benecky sprung into life, winning six of the next seven legs to force a deciding set.

The next four legs were shared, meaning the match went all the way to a sudden-death leg.

Though Benecky threw first, trebles became elusive for the 21-year-old and Joyce took full advantage, firing in a 171 before wrapping it up on double ten to his relief.

Keane Barry overcame Royden Lam in a tense match, coming out on top 3-2 to earn his first World Championship title at the third attempt.

Barry, on the other hand, lost control of the match as Lam won the third set decider to cut the lead in half before pinning the bull for an 86 checkout to tie the match.

In the last set, with the score tied at 1-1, Barry scored a critical 64 checkout to break throw, and after Lam missed seven darts to force a last-leg shoot-out, Barry eventually found double two to win.

Koltsov gets his first win, but not a handshake

Boris Koltsov picked up his first ever first round win with an impressive 3-0 whitewash of Jermaine Wattimena.

The Russian, who was highly-animated throughout, laid down a marker in the opening leg with a 130 checkout on his way to winning the first set 3-1.

Koltsov engaged with the crowd in the second set, which he also won 3-1 to double his advantage.

An out-of-form Wattimena continued to fight, taking the third set to a deciding leg but after the Dutchman missed three set darts, Koltsov closed out a memorable win on double ten. Wattimena was less than pleased at the finish and proceeded to walk off stage without shaking the Russian’s hand.

In his meeting with Canada’s Jeff Smith, Ross Smith also had a clean sweep.

Ross Smith had a strong start, winning six of the first seven legs to establish a 2-0 lead, but he eventually lost the third set after Jeff Smith missed two darts to keep the match alive.

In the second round, Ross Smith will face world number 16 Stephen Bunting.

Meanwhile, Paul Lim had an unsatisfactory return to Alexandra Palace, losing 3-2 against Joe Murnan in a rough match.

Lim, 67, made history by becoming the oldest player to compete in a PDC World Championship, but he was defeated by Murnan, who will face 10th seed Nathan Aspinall in the second round.

The World Championship continues on Saturday with a double session of play, including a return to Alexandra Palace for three-time winner Michael van Gerwen.

Best of five sets (no tie-breaks in round one matches)