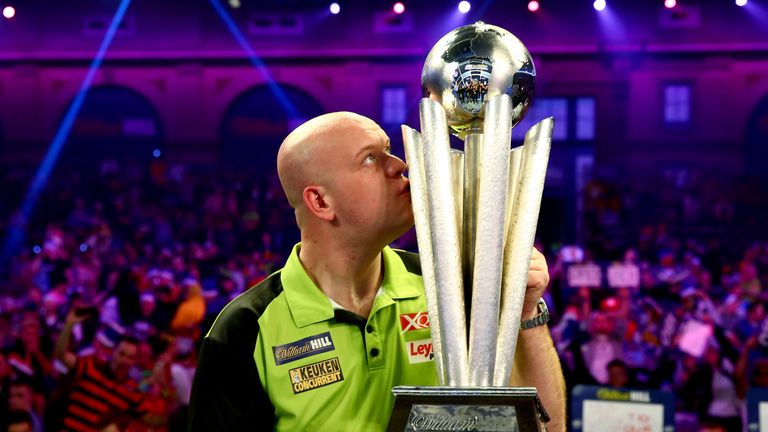 It’s the first Saturday of the 2021/22 PDC World Darts Championship. As with the last couple of days, we have two sessions, each containing three first round matches followed by a second round match.

The players involved today really have something to live up to, after Willie Borland lit up the stage with a magical nine-darter in the deciding leg of his match against Bradley Brooks.

Here’s what we can look forward to on Day Four of the 2021/22 PDC World Darts Championship. 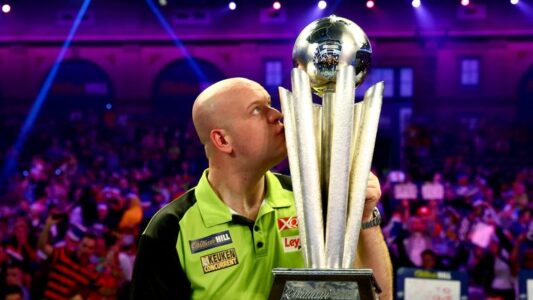 Michael van Gerwen starts his campaign looking to get his hands back on the World Darts Championship. Credit: PDC

The finale of the afternoon session, sees Ian White hoping to set up a third round clash with Gary Anderson. He takes on Chris Landman, who sprung something of an upset as he whitewashed former BDO World Champion Scott Mitchell in round one.

Diamond will be hoping to improve his record on the Ally Pally stage, having only made it past this point on two occasions and only once having gone past the third round.

It won’t be easy for him however, as Landman was particularly impressive on the outer ring in his opener, finishing the match with a checkout percentage of 60%. Will he be able to stay close enough to White in the scoring phase to give himself enough opportunities to make it count, or will White dominate the match an set up a duel with the Flying Scotsman?

In the afternoons first round ties there is the potential for an absolute cracker between Darius Labanauskas and late replacement, Mike de Decker. Both are very capable on their day, as Labanauskas proved recently with a run to the semi-finals of the final pro tour of the season, before beating Mervyn King in the first round of the Players Championship Finals. They’ve played each other twice in the past, with the series standing at 1-1. Who will get the job done today and take the lead in the head to head?

In another intriguing tie, Callan Rydz starts his tournament against Yuki Yamada of Japan. The Riot will be hoping to end the year that saw him win his first two PDC titles with Pro Tour wins in February and October, with a deep run at the World Championships. The other first round tie of the afternoon sees world number 41, Jamie Hughes, take on Raymond Smith of Australia for a shot at Devon Petersen in round two.

van Gerwen the main event in the evening session

We get our first glimpse of Mighty Michael van Gerwen, the three time champion at the PDC World Darts Championship, as he kicks off his campaign against Chas Barstow. It’s been a poor season by the green machine’s albeit astronomical standards, but that could all be forgotten if he goes on to lift the Sid Waddell Trophy for the first time since 2019.

His only TV title this year came at the Nordic Darts Masters in September, when he came from behind to defeat Fallon Sherrock.

Barstow played well in beating John Norman Jr 3-1 in round one to set up the tie with van Gerwen. We’ve seen him play a lot of competitive darts in the Online Darts Live League over the last few months. Can he transfer that form to the Alexandra Palace stage and shock the World or will Mighty Mike be a step too far?

Elsewhere in the evening session we have some cracking ties to look forward to, the pick of which being recently crowned World Youth Champion Ted Evetts taking on 2021 Challenge Tour winner Jim Williams, who impressed on the big stage at the Grand Slam when beating both James Wade and Boris Krcmar.

The aforementioned Krcmar is also in action this evening as he opens up the session against Adam Hunt. Recent form for the big Croatian, losing his last eight competitive matches in a row. Can he reverse the slump on the biggest stage of all, or will it be Hunt who books his place in round two and a matchup with Vincent van der Voort?

The final tie of today’s first round matches sees the first of the Rodriguez brothers take to the stage. Rowby-John is up against Nick Kenny in what both will see as a good opportunity to progress. Luke Humphries lies in wait for the winner in the second round. The pair have met on three occasions, with RJR winning all three. Will that trend continue tonight?

Best of five sets (no tie-breaks in round one matches)