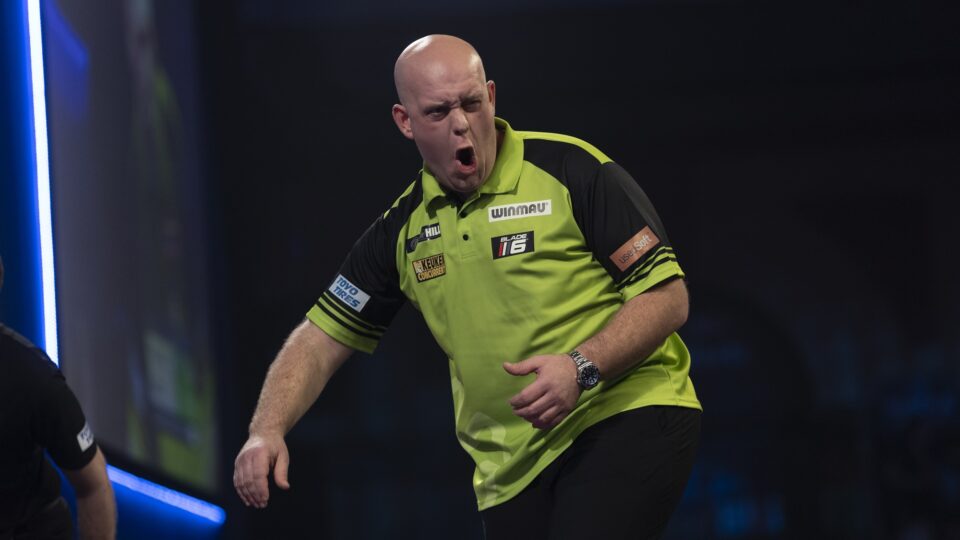 Michael van Gerwen eased through to round three on day four of the PDC World Darts Championship.

The Dutchman, who last won this title in 2019, came through 3-1 against Chas Barstow in a high quality game. The other seed in action, Ian White, beat Chris Landman by the same scoreline.

The big moment of the day however came in Saturday’s afternoon session. After Willie Borland hit a nine darter to win his match yesterday, Darius Labanauskas found perfection in his game against Mike De Decker. The result was different for Lucky D though, as he lost 3-1 to the Belgian.

Despite a torrid time on the outer ring, Van Gerwen managed to battle past against the non tour card holder Barstow, who beat John Norman Jr to set up this clash.

The first set went to a deciding leg, in which MvG missed seven darts to win it. Barstow then took out an incredible 116 outshot to steal the opener against the darts.

However, the big moment in the match came in the second set. With the score level at 1-1, Barstow missed double five for a 130, which allowed The Green Machine to take out 61 and break his opponent’s throw. An 80 outshot, with Barstow on 38, saw Van Gerwen move level in sets.

After the second set interval, MvG looked more in control. A 97 finish completed a whitewash third set, and back to back 99 checkouts sealed the victory and a place in the last 32.

Two holds and two breaks saw the first set go to a deciding leg, which White won with a 14 darter to take the opening set against the throw. The second set was much more comfortable for Diamond, who held in 13 and produced back to back 16 darters to move one set away.

Landman, who beat Scott Mitchell on Thursday to set up this clash, fought back in the third set. It went to a fifth and deciding leg, in which the Dutchman took out 80 to extend the contest. However, it did not lead to a comeback, as another whitewash set for White sealed the victory. It’s his first win at this event for four years, and he’ll play Gary Anderson in round three.

Labanauskas hits nine but loses, Williams through on debut

The other big moment of the day came in the afternoon session.

Following on from Willam Borland’s stunning nine darter to win the match yesterday, Darius Labanauskas produced the feat today to win the opening set against Mike De Decker. Leading 2-1 in the set, Labanauskas hit a 174 and 180, before ending the leg with a 147 outshot to achieve perfection and send the Ally Pally crowd wild.

However, Lucky D only then went onto win two of the next nine legs, as his doubling let him down throughout the contest. He finished 5/19, as De Decker, who replaced Charles Losper in the field due to visa issues, dominated the remainder of the game.

He whitewashed the second set, before a 47 outshot in the fifth leg of the third moved him one away. That seemed to break Labanauskas, who suffered a second whitewash set of the match to lose 3-1, becoming the 16th player to hit a nine darter on TV but lose the match. De Decker takes on Dave Chisnall in Tuesday’s afternoon session.

Jim Williams joined De Decker in winning his round one game, as he saw off Ted Evetts 3-1.

Super Ted, who won the World Youth Championship last month, could not get going on the doubles in the early part of the match. He ended up just 1/19 on the outer ring over the first two sets, allowing the 2020 BDO World finalist to take a 2-0 lead.

Evetts fought back in the third set, winning it in just 39 darts with a set average over 113. Both broke in the fourth set, before Super Ted missed tops for an 80 checkout. Williams stepped in to find an excellent 120 outshot, before taking advantage of two more missed doubles from his opponent to take out 44 and complete the victory. The Welshman plays Joe Cullen on Wednesday afternoon.

What else happened on day four of the PDC World Darts Championship?

Rowby-John Rodriguez hit the second highest average of the tournament so far, as he beat Nick Kenny 3-0. Checkouts of 72, 98 and double 16 got the World Cup runner up over the line against the Welshman, as he dropped just one leg in the match. Rodriguez takes on Luke Humphries in Wednesday afternoon’s session in round two.

Raymond Smith produced one of the biggest wins of his career to knock out Jamie Hughes. He took out a 100 outshot to win the opening set on throw, before taking out the same checkout to take a 2-0 lead. Despite Yozza winning the third set against the darts, it did not spark a comeback, as the Australian took out 48 to complete a 3-1 victory, ending up 10/17 on the checkouts. He will play Devon Petersen in round two on Wednesday night, and will watch his son Ky take on Maik Kuivenhoven in round one tomorrow.

Callan Rydz eased to victory in round one of the 2021/22 PDC World Darts Championship. The Riot, who won two Pro Tour titles, came through a tight first set against Japan qualifier Yuki Yamada. However, back to back whitewashes saw Rydz complete a 3-0 win, and set up an intriguing round two tie against Brendan Dolan on Thursday afternoon.

Adam Hunt made the second round of the tournament for the second straight year. He hit 5 180s, and took out finishes of 69,59 and tops to beat Boris Krcmar of Croatia 3-0 in a comfortable enough victory, with Krcmar just 4/13 on the outer ring. The Hunter will play Vincent van der Voort in round two on Wednesday 22 December.