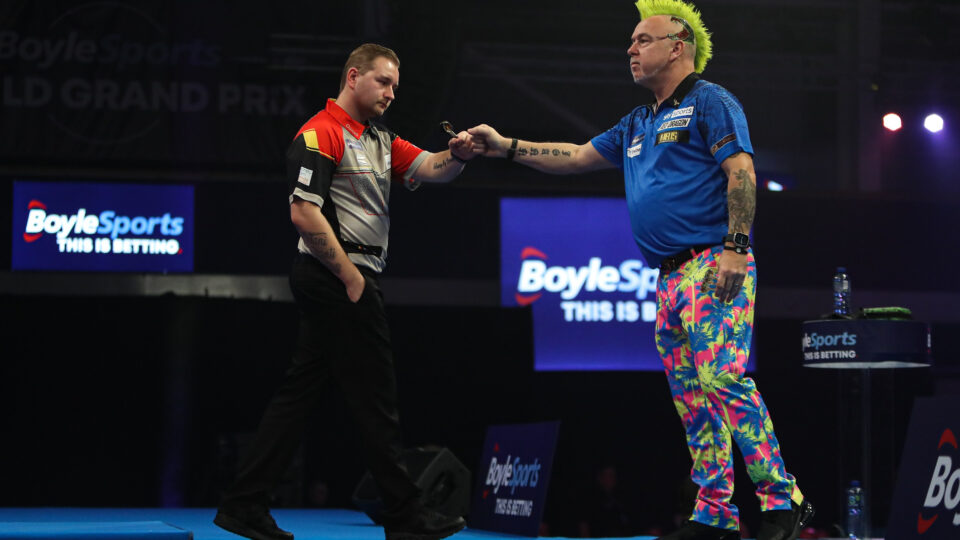 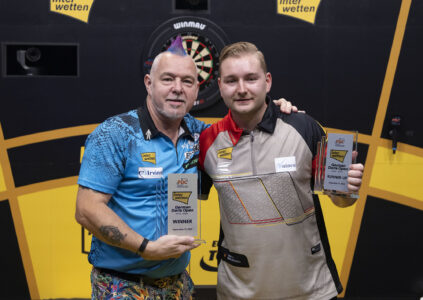 Where to start with this game?

Peter Wright played amazingly in the first set that included a 10 darter and a 130 checkout. He then set up tops to win set 2 but blew it by dragging a dart into the single 1. Van den Bergh punished that to level.

The Belgian took the lead in sets with Snakebite clearly annoyed at his previous blunder. The Belgian produced some good darts to move ahead 2-1 before Wright fought back to level at 2-2.

The last set was chaos. Wright went 2-0 up and then missed 3 match darts. Dimitri won back to back legs and sent us to a decider that saw Peter miss another 2 match darts, before the Dreammaker missed 3 clear at D12 to win it himself. The Scot almost blew it, but squeezed in his third dart at D10 to get the win in a similar way to when he won his first World Championships. 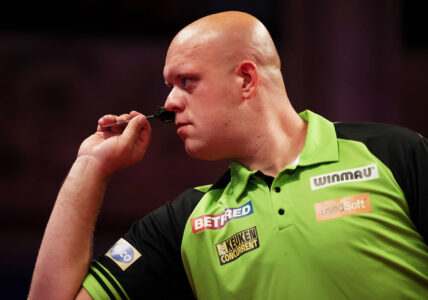 Michael van Gerwen produced a 99 average to race into the semi-finals of the Boylesports World Grand Prix.

The Dutchman won the first set in a last leg decider, and would have made it 2-0 in sets if not for a brilliant 122 out from Hollywood.

Despite a brilliant performance from Dobey, MVG was nearly unplayable. He made it 2-1 with a 109 finish and sealed it with an exhibition 105 on tops tops. The biggest chance for Dobey came in the second last leg, when Dobey busted 100.

Not much could have stopped van Gerwen tonight though, with an impressive 6 opening visits of 160. Will the provisional World Number One be good enough tomorrow?

The 2020 champ is on course for a second Grand Prix win as he cruises past the Latvian number 1.

The first set was about as easy as they get, with Razma missing 6 darts in the first leg to gift the Iceman a break. Withhin 5 minutes it was 1-0 in sets. Set 2 was something of a massacre, with Price having a 200 points start on his way to a whitewash set.

Sadly Razma never really got into this game. A 107 and 116 out sealed the win for the Welshman who won 9-2 in terms of legs and in 3 unanswered sets.

Nathan Aspinall survived a tricky test against Martin Lukeman to make the semi-finals.

The Asp coasted to the first set with his opponent only averaging 67. Despite playing better than Lukeman in the next set as well, his failure to start quickly on doubles allowed Lukeman to pinch it with a 69 out.

The former UK Open champ regained the lead with the help of a brilliant 138 out, but again was pegged back to 2-2 as he just could not attack the Lukeman throw.

Despite a few snatched darts and wayward 5s, Aspinall held his nerve to take out 196 in 6 darts and book his place in the last 4.