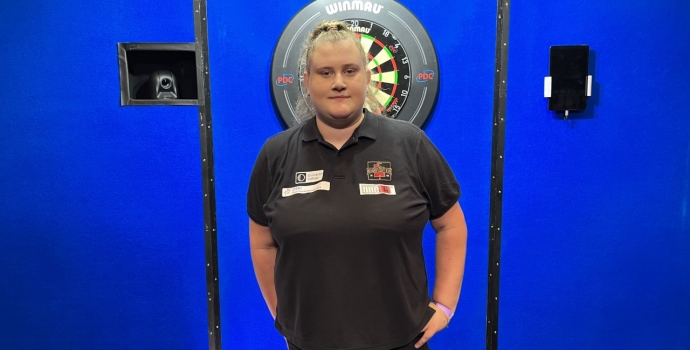 Greaves won back-to-back championships on Saturday to earn £2,000 in prize money, and she repeated the feat in a convincing manner on Sunday in her first Women’s Series appearance since 2020.

The WDF Women’s Champion reinforced her talent at Halle 39 with a string of brilliant performances, compiling an astounding 24-match victory streak over the course of the weekend.

Despite missing the first 12 events of this year’s Women’s Series, Greaves is currently only £1,800 away from provisional qualification for the 2022/23 Cazoo World Darts Championship.

The 18-year-old began Sunday’s Event 15 competition with whitewash victories over Tharsissia Werinussa and Laura Turner, then she survived a match dart to edge out Lorraine Winstanley.

After defeating Priscilla Steenbergen and Deta Hedman, Greaves faced Mikuru Suzuki in the final for the third time in a row. The two engaged in a fierce battle, with Suzuki nailing a pair of 12-darters to tie the score at three.

Greaves, on the other hand, countered with consecutive 12-darters of her own to win a record-breaking third straight victory, executing a superb 161 finish on the bull to win with a 95.46 average.

Following a crushing victory over Britta Gabriel, she continued to dominate in the first rounds of Event 16, defeating the Dutch combination of Sharon Straatsma-Pul and Roos van der Velde.

The Doncaster star then defeated Rhian Griffiths and Katie Sheldon to get to her fourth final of the weekend, where she will face Aileen de Graaf in the showdown on Sunday.

Although De Graaf cut the deficit to 4-3, Greaves took the early lead with legs of 13 and 14 darts. The teenage star then followed up her fourth 180 with a 73 checkout to clinch the quadruple.

De Graaf, who finished second at the Women’s World Matchplay last month, put on some brilliant performances in Event 16, thrashing Lisa Ashton with a 93 average in the last 16.

The Dutch superstar, who has surpassed Winstanley into third on the Women’s Series Order of Merit, was attempting to become the eighth player to win on the PDC Women’s Series circuit.