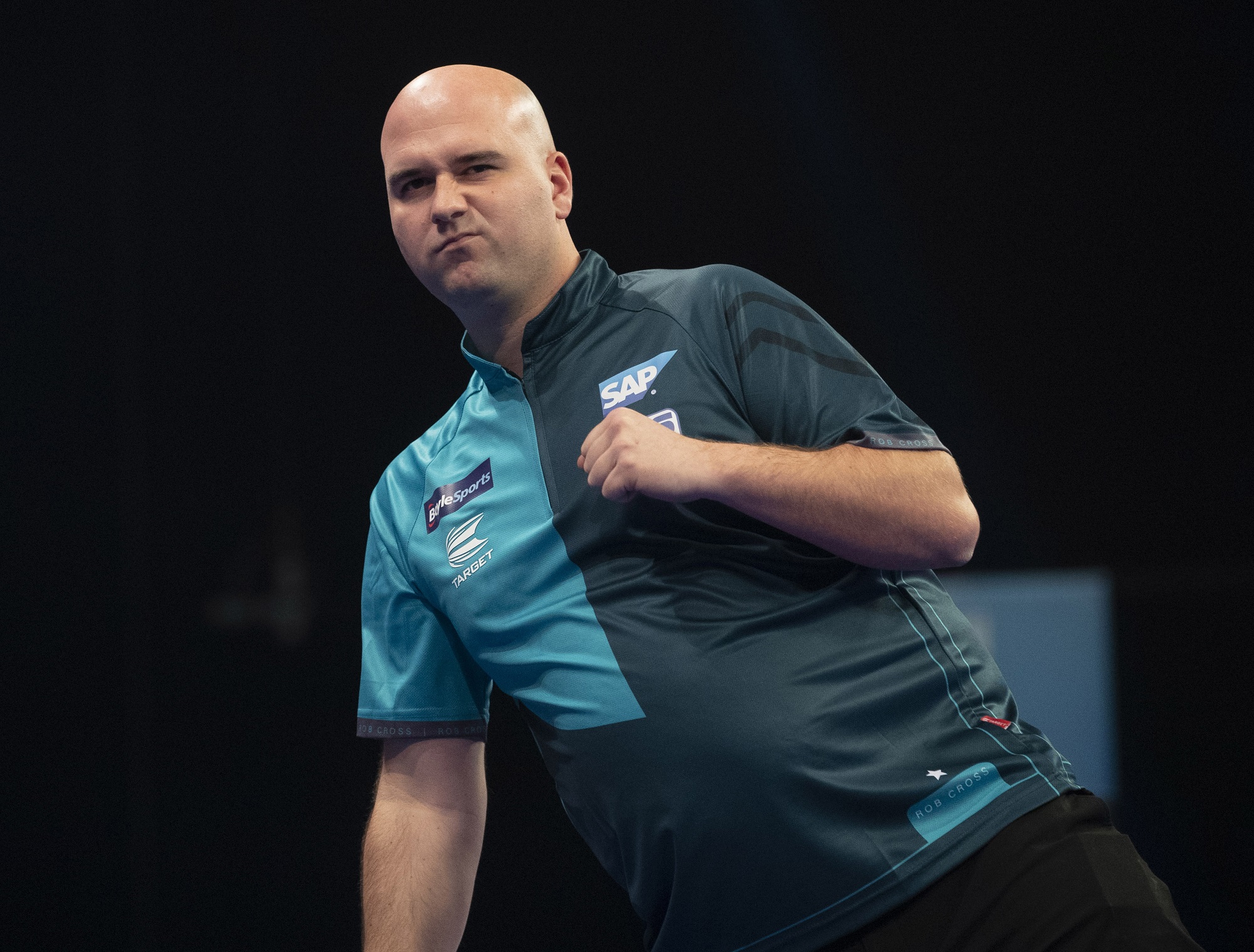 Rob Cross and Gary Anderson progressed to the last 16 on day three of the BoyleSports Grand Slam of Darts.

In games that both had to win, Rob Cross beat Luke Humphries 5-2, while Gary Anderson won 5-3 against Ryan Searle.

Elsewhere, day three of the Grand Slam of Darts saw:

Cross and Chisnall come through group

Rob Cross’ 5-2 over Luke Humphries on day three of the Grand Slam of Darts saw him into the knockout stages.

It was arguably one of Voltage’s best performances in a while. He held in 15 darts to start, before punishing three missed darts from Cool Hand for 1-1, hitting a 100 checkout to break and go 2-0 in front.

Two more holds followed, before Humphries went inside on double eight for a 136 checkout, which would have got him back in the game. Cross then capitalised, hitting double 16 to take a 4-1 lead.

Humphries held again, but the same story happened for him in the leg that ended the match, missing tops for a 72 outshot to get the game back on throw. This allowed Voltage, who’d missed tops for a 120 finish, back to the board, and he took out double ten to complete the victory.

Cross qualified alongside Dave Chisnall, who came first in Group D despite a below par performance against Justin Pipe.

Pipe missed four darts in the opening leg to hold, allowing Chisnall to hit double eight and get the early break. The Force would fight straight back, hitting a lovely 90 checkout on the bull to level at 1-1.

Two back to back 15 darters saw Chizzy take a 3-1 lead, but Pipe kept in the contest, holding to trail 3-2. He then missed two at double 12 to equalise once again. Chisnall hit tops for 4-2, before eventually finding double one in the final leg to get over the line 5-2. The leg saw 16 darts missed at double, and the match had 34 missed overall.

Gary Anderson beat Ryan Searle 5-3 to keep up his perfect record of getting out of the group stage every time he has played in the tournament.

The Flying Scotsman took the lead in the first leg, capitalising on three missed darts from Heavy Metal to ping in a stunning 111 checkout to break. He consolidated the break with a 14 dart hold, going 2-0 in front.

Five holds saw Searle would get the game back to 4-3, before the two time back to back World Champion closed it out. Heavy Metal left himself 74, but Anderson produced a fantastic 119 checkout on the bull, to close out the match and move into the knockout stages, setting up a mouth watering showdown with old foe Michael van Gerwen in the next round.

Anderson joins Simon Whitlock in the last 16, who topped Group B with a fantastic comeback against Adam Gawlas.

The Wizard threw six perfect darts in the first leg, but missed four darts to win it, allowing Gawlas to hit double four and take an early lead. A further three legs were won by the Czech teenager, hitting an 11 dart hold in one of them, as Whitlock went 0/12 on the checkouts in the first four legs.

Whitlock though, enjoying a recent renaissance, fought back hard, winning two legs on the spin to trail 4-2. He missed three darts at double 16 in the next leg, but Gawlas could not capitalise, missing tops to win the match. The Wizard then found double eight to win the leg, and reeled off two further legs in 28 darts, to secure an improbable 5-4 win to win his group.

Nathan Aspinall moved into the last 16 on day three of the BoyleSports Grand Slam of Darts, winning 5-1 against Ricky Evans.

In another straight shootout, The Asp got off to the perfect start, breaking in 14 darts after Evans missed three for the leg. Two holds followed, as Evans kept in the contest with a 15 dart hold.

Aspinall though went two legs clear again by finding double four, before punishing four more missed darts from Rapid Ricky to get the double break and lead 4-1. The former UK Open champion then sealed the contest with a 17 dart hold, to take victory and qualify.

The Asp joins Dimitri Van den Bergh, who hit his third ton plus average in as many group matches, topping Group H with a 104.33 average against Wayne Warren.

Once again, the World Matchplay champion was in sparkling form, hitting two 13 darters in a row to go 2-0 ahead. Warren would break with a 66 finish, getting the match back on throw at 2-1.

However, Van den Bergh found another gear, winning two legs in 32 darts to go 4-1 in front. He almost finished the match off with a sensational nine dart finish, but missed double 12 for the second time this week to complete the feat. The Dream Maker had to settle for a 12 dart finish, to take a 5-1 win against the BDO World Champion and complete a fantastic group stage of the tournament.

The Heat would go on to lead 4-3, and missed two match darts in the eighth leg to seal the contest. This allowed Machine Gun, who had busted on 24 the previous visit, to hit double 12 and send the shootout into a decider.

The final leg was full of drama. Heta missed tops for a 120 finish, allowing Wattimena a shot at double eight for the match. There, he went inside on 8s, 4s, and 2s, and Heta stepped up to find double 10 and come through a gripping contest.

Heta joins James Wade in the knockout stages, who won 5-2 against Glen Durrant to win Group F on day three of the Grand Slam of Darts.

Wade missed darts to take the first leg, but won the second and third to go 2-1 ahead. However, Duzza would respond, hitting a 68 checkout for a 15 dart break to level at 2-2.

The Machine though found the extra gear he needed to win the contest. He took out a 108 checkout to hold throw in the fifth leg, before getting the crucial break in 13 darts in the sixth.

Wade then pinged his beloved double 10 to seal the contest, and send the Premier League champion home, as Durrant continues to recover from testing positive for COVID-19.