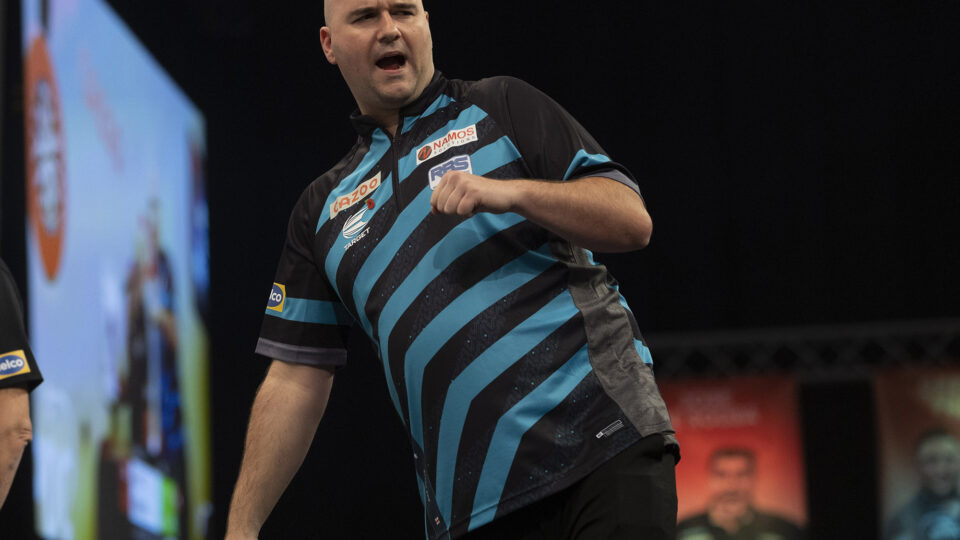 For the final time before Christmas, the players met for round two action, that saw former World Champions clash on the Alexandra Palace stage. We saw whitewashes, stunning comebacks and impressive performances as more players booked their places in the next round.

The centre piece of the evening saw two formal World Champions clash on the Alexandra Palace stage. Raymond van Barneveld got off to the perfect start, breaking the Cross throw in the first set before taking out the ‘Big Fish’ to double his advantage. RVB then took out double 20 to win the first set 3-1. Voltage responded immediately, pinning 128 to lead 2-0. He then checked out 93 to round up the second set and level the game at 1-1. Both players exchanged two hold of throws at the start of the third set to force it into a last leg decider. Voltage opened the decider with a 180 and nailed double 4 to take a 2-1 lead in the match.  He then took full control of the game, taking out 86 to lead by 2 legs. Cross finished the match off on double 20 to make sure that he will return to the Palace after Christmas.

De Sousa survives a scare to edge past Jason Lowe

Jose de Sousa completed the sessions second comeback to beat Jason Lowe at the World Darts Championships. Jason Lowe snatched the opening set, against the throw, with two impressive ton plus checkouts. Lowe continued his demolition job, double his set advantage in a final leg decider. The Special One responded in the perfect way winning back-to-back sets with averages of 96 and 98 to level the match up and take it to a final set decider. The World number seven took the advantage and pinned 124 to win the final set 3-0 and set up a clash against Alan Soutar.

Rydz produces his ‘A’ game to beat Brendan Dolan.

36th in the world, Rydz produced a stunning performance, with a 102 average to dispatch Brendan Dolan in the afternoon session. The Riot breezed through the first set, with a 99 average and 113 checkout to take the upper hand in the match. It went from bad to worse for Dolan, who watched Rydz reel off the next three legs to race into an impressive 2-0 lead. The third and final set of the match went to a deciding leg, but, having average 117 during the set it was Rydz who took his opportunity and booked his place in the next round, where he plays Nathan Aspinall.

The final game of the session saw Chris Dobey up against Rusty-Jake Rodriguez and It was first blood to RJR, who punished missed doubles to take out 88 and get his first set on the board. Both players exchanged break of throws at the start of the second set before RJR pinned double 16 to take the lead. He continued his fine form and found a 90 checkout to double his advantage and lead the game 2-0. Hollywood stopped the rot, hitting 81 and 76 to open a two-leg advantage in the third set. He took 32 out to get his first set on the board. RJR responded with an impressive 14 dart leg to take him within two legs of the next round. Hollywood then hit 36, 40 and 8 to force a deciding set. Hollywood took the advantage, hitting double 8 to go within one of the match. Dobey then pinned double 20 to in the final set, to set up a mouth-watering tie against Michael Van Gerwen.

What else happened on day nine of the PDC World Darts Championship?

In the opening game of afternoon, Damon Heta found himself up against Luke Woodhouse. The Heat dodged a bullet in the first set, capitalising on missed doubles to pin double 8 to take the lead. It was a similar story just one set later, with Woodhouse missing even more darts at a double and being punished by Heta. The Englishman then took the third set, having survived two match darts to keep himself in the match. But it was to no avail with The Heat holding his nerve to get over the line and reach the last 32 for the first time.

Mensur Suljovic and Alan Soutar played out a thrilling game, which saw Suljovic miss eight match darts as he was dumped out of the World Darts Championships. Soutar took the opening leg of the match, before The Gentle reeled off six straight legs, pinning 141 to take the second set and lead 2-0. Soutar then stopped the rot and pinned double 18 to level the match up at 2-2 and have the darts in the deciding set. Suljovic then raced into a 2-0 lead in the final set but would rue those missed darts when Soutar levelled up at 2-2 and then took out a breathtaking 144 checkout to win the final set 6-4 in a tiebreaker.

In the first game of the evening session, Danny Noppert came from a set down to beat Jason Heaver 3-1. Heaver took the opening set of the match, against the throw, capitalising on missed darts from Noppert. The second set started with an immediate break of throw, with Noppie hitting double 8, double 10 and a 104 checkout to level the match. Noppert then turned the screw in the game, racing through the next set 3-0 with an 86 average to lead the game for the very first time. Noppert missed three match darts in the third set and pinned double 10 at the fifth time of asking to book his place in the next round, where he will meet Ryan Searle.

The German Giant Gabriel Clemens came up against youngster Lewis Williams and immediately took control of the first set, breaking the Williams throw and then taking out 97 and 32 to win the first set in comfortable fashion. The Prince of Wales broke the throw of Clemens in the first leg of the second set. But he was broke straight back in sensational fashion with a 143 checkout from Clemens levelling the set up. The German then hit double top to take a 2-0 lead and then returned to the double in the deciding led to take a 2-0 advantage in the match. Clemens then cruised through the final set, with a checkout of 87 to round off a straight sets victory over the youngster.